Round two saw Koby Okada, who attended Pro Tour LA 2000 and Pro Tour Washington (his team placed 19th) play Itaru Tanikawa who has only been playing Magic for two years and is still looking for his first big tournament victory. Okada's mono-red burn deck with efficient creatures can be an easy match-up for Tanikawa's white weenie deck with Soltari Priests, Mother of Runes and Empyrial Armor but only if he draws the right cards at the right time. 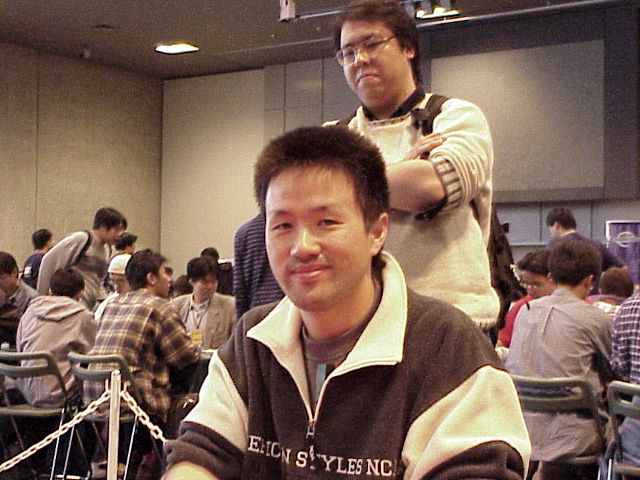 Unlike most Japanese players who just cut their opponent's decks, Okada has played at the Pro Tour and knows the value of shuffling. Neither player mulligans, despite the extra randomizing, and Tanikawa opens with a Plains. Okada drops a first turn Mogg Fanatic and a second turn Fireslinger. The Fireslinger is not a common card in Extended red decks, but it does see play on occasion. It can totally dominate small creature decks as Okada demonstrated by using the Fireslinger to "sling" half a dozen of the creatures that Tanikawa conveniently played one at a time. This left Okada with lots of direct damage to clear out any two-toughness creature that might have blocked his creatures and he quickly won the game.

Tanikawa started with a first turn Mother of Runes which could gain him 2 for 1 card advantage if she gets past summoning sickness. Okada had lots of one casting cost damage options as he demonstrated by dropping a Mogg Fanatic and killing the Mother. Tanikawa played another Mother on turn two but Okada Incinerated it to keep the board clear. 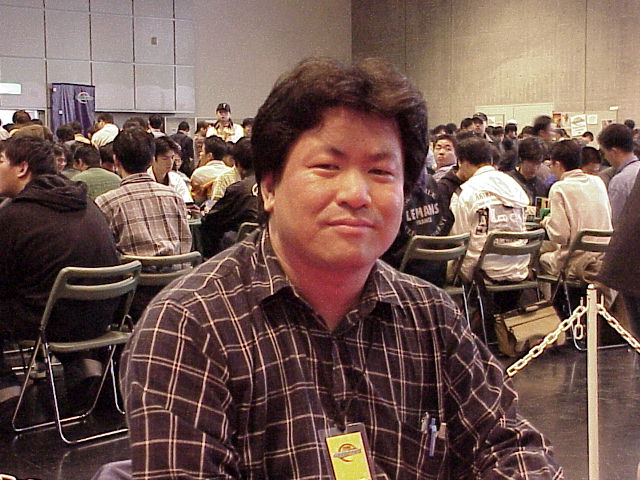 Tanikawa dropped both a Soltari Monk as well as the rarely-seen Soltari Foot Soldier on turn three but again Okada has the answer as he removes a Mogg Fanatic from the game to cause a Cave-In that destroys both white creatures. It looks like one of these players will eventually have to run out of burn or creatures but Tanikawa keeps up the pressure by dropping a turn four Masticore! Masticore can often totally dominate a red deck if its regeneration ability is available and realizing this, Okada sacrifices two Mountains to Fireblast the beast.

Tanikawa's deck still hadn't run out of steam though as he plays a Soltari Monk on the next turn. Okada is holding Anarchy but only has three land available, so he starts playing Seals of Fire but not using them hoping that he can get some card advantage by waiting for multiple white creatures to destroy. Tanikawa keeps up the awesome pressure by drawing creature after creature but Okada keeps drawing direct damage that he is forced to use as he waits for a fourth land to cause some Anarchy.

Finally Okada draws the fourth land - but it's a Ghitu Encampment! He plays the land and faces a hard decision. At four life with three power worth of enemy white creatures in play, Okada holds a Cave-In and an Anarchy. Should he discard Anarchy to cast Cave-In and put himself down to two life, or should he take three damage from attacking creatures and wait until the Encampment untaps so he can cast Anarchy, hopefully after Tanikawa plays a third creature? 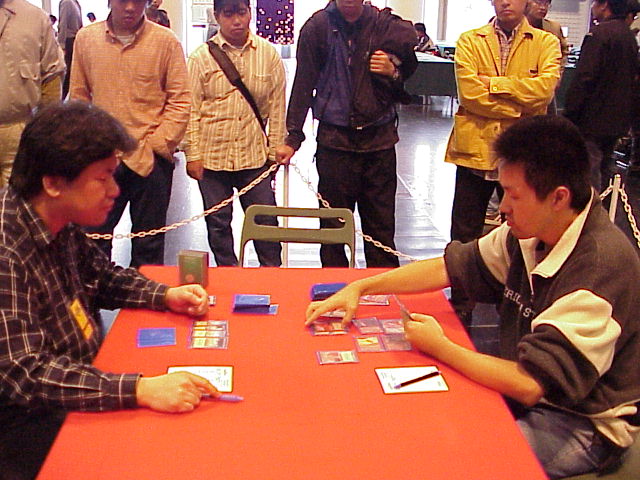 Okada spends a minute thinking over the decision and decides to go with Cave-In as he doesn't want his opponent to drop an Empyrial Armor and win the game. This proves a wise decision as Tanikawa drops a 1/1 and encases it in Armor a couple of turns later but by then Okada has drawn a Cursed Scroll and with only one card in hand, Tanikawa can't keep his 1/1 (now 2/2) creature alive long enough to get the win. Cursed Scroll allows the red deck to quickly dominate the white weenie deck, even against the protection from red creatures. Okada starts putting out goblins and wins the game a few turns later.