Schrödinger’s Player of the Year Brad Nelson brought his usual focus and intensity to the Feature Match arena, sitting across from former World Champion Makihito Mihara. Both had dropped their first round, and showed a silent resolve that the losing would stop here.

Mihara’s Valakut, the Molten Pinnacle deck came out slow off Terramorphic Expanse and Evolving Wilds. Nelson Preordained, then played Stoneforge Mystic and searched up Sword of Feast and Famine. Mihara had no play on three land. Nelson played a Celestial Colonnade and passed. Mihara tapped four for Oracle of Mul Daya, and Nelson paused before allowing it to resolve. Mihara flipped his top card, but it was Cultivate, so he played a Mountain from his hand and passed. 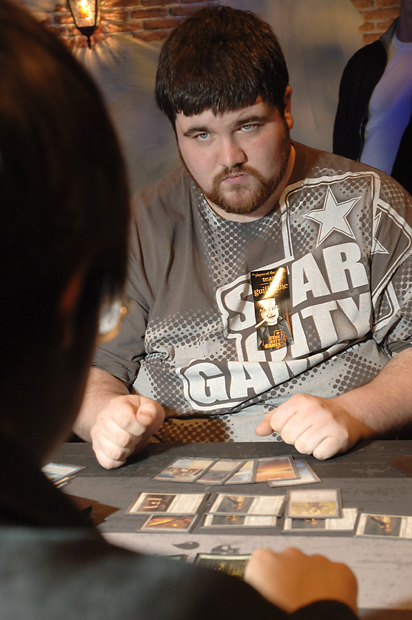 Brad Nelson, never more literally wearing his heart on his sleeve, clearly has his mind on the impending Player of the Year playoff match on Saturday.

Nelson’s Stoneforge Mystic put the Sword of Feast and Famine onto the battlefield and he quickly untapped. He suited up his Mystic, cast a Squadron Hawk, then attacked for 3, untapping his four lands. Mihara pitched a Mountain to the Sword. Nelson summoned a second Hawk and passed the turn with two mana open, a commanding position.

Mihara drew the Cultivate and revealed Summoning Trap. He frowned at his options. He tentatively put forward Cultivate, and Nelson allowed it. He searched up two Mountains, flipping up a second Oracle on top of his deck, then tapped out for Koth of the Hammer. Nelson wasted no time flashing the Mana Leak.

Things went downhill for Mihara from there. Nelson’s team got a small boost from Sylvok Lifestaff, and they charged in. Mihara lost his last card, Avenger of Zendikar, to the Sword. Mihara gamely cast his second Oracle, showing a Cultivate on top of his deck. A Gideon Jura from Nelson earned the scoop.

The second game began as an echo of the first: Mihara with no play on his first two lands (this time, Valakut, the Molten Pinnacle and a fetch land), and Nelson with Stoneforge Mystic for Sword of Feast and Famine. Mihara Cultivated and Nelson made no move on his three land, waiting to sneak his Sword of Feast and Famine. Mihara tried a second Cultivate, which was allowed, and had no further play.

Nelson continued his encore, bringing the Sword into play. Mihara waited on his Nature’s Claim, though, and after the Mystic equipped the Sword, Nelson had a blue mana left to Spell Pierce the Claim. Mihara discarded one of his many excess land and watched as Nelson Preordained twice, leaving two mana open as he passed the turn. 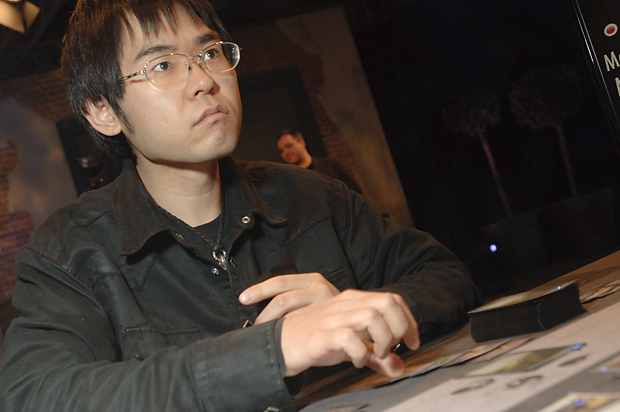 Makihito Mihara, crowned World Champion in Paris in 2006, returns to the scene of the crime.

Mihara untapped, then tapped four of his seven lands and cast Koth of the Hammer. Nelson went deep into the tank. He frowned and shook his head, going over scenarios in his mind. Finally, he tapped two and cast Flashfreeze to counter.

Now it seemed like Nelson had free reign. He played Jace, the Mind Sculptor, Brainstormed, then attacked and got all his mana back, completing the dynamic duo with Gideon Jura. Mihara could do nothing with his wealth of mana. A second Stoneforge Mystic got Sword of Body and Mind, and Gideon decided to bring the fight in person. Nelson also dispatched Valakut, the Molten Pinnacle with Tectonic Edge on Mihara’s next upkeep. Rather than continue the charade, Mihara conceded.