Feature Match Round 3: “Is This Really Happening to Me?”

It’s a new Pro Tour year for these seasoned Pros and they’re both starting off right. Finding themselves in the Feature Match arena, both sitting at 2-0, they sat down with easy smiles. Brian Kibler’s been on a tear ever since Pro Tour Austin, and though Raphael Levy’s been a bit cool as of late, it’s only been since, well, his Hall of Fame induction, so I think we can give him a pass. Levy was playing the blazingly fast mono-white Quest deck, with Kibler’s Stoneforge Mystic-toolboxing, Squadron Hawk-cawing White-Blue Control.

They both kept their openers and were off to the races. A Seachrome Coast was answered by the titular Quest for the Holy Relic, sent to two counters immediately by two Memnites. Kibler elected to cast a Stoneforge Mystic turn two (searching up a Sword of Feast and Famine) rather than holding up Mana Leak mana. 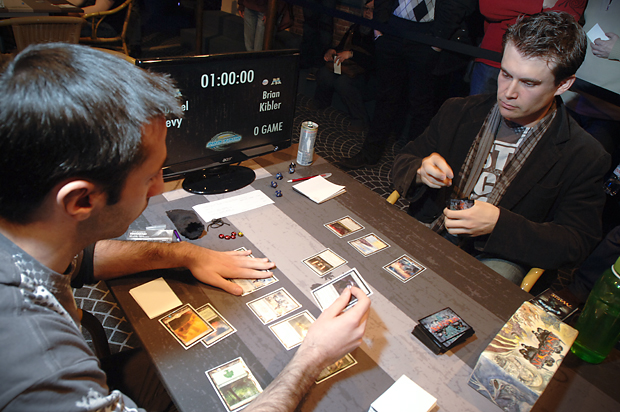 “Are you blowing up this turn?” Kibler nervously inquired. Levy only smirked, cast a Squadron Hawk, and passed back.

Kibler had the all-important Day of Judgment #1, so as long as he could hit land four before the deeply discounted Argentum Armor came down, he could rest easy. Nonetheless, his constant card-flipping revealed his nervous energy. Levy’s Birds of Paradise and Fauna Shaman completed the Quest for the Holy Argentum Armor on turn three, and the Seachrome Coast blew up thanks to the +6/+6-granting equipment.

Sword of Feast and Famine came down in response for Kibler, but it was all for naught. The next turn he equipped his paltry-looking Sword and swung in. After Levy correctly assigned a blocker, Kibler scooped.

“It wasn’t quite turn two,” Kibler scoffed, as they sideboarded.

“Three rounds in and they’ve all been decks I really didn’t build mine to play against.”

“Is this really happening to me?” 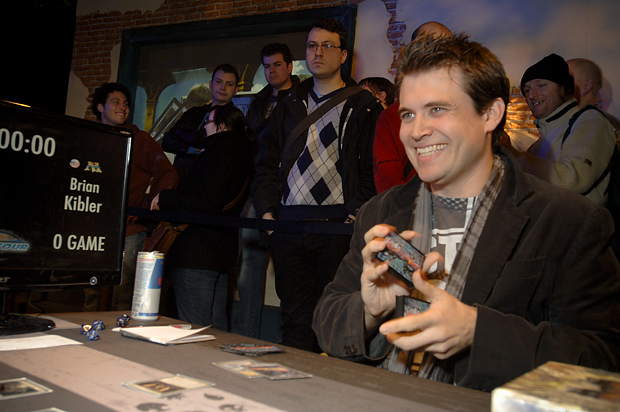 Brian Kibler, with his trademark grin.

The now 6/8 Flying Ornithopter took out a Seachrome Coast, but Kibler was able to quickly recover with a Glacial Fortress and a pre-attackers Divine Offering the next turn, taking the him back to 20, before sinking to 18 from the attacking Glint Hawk. Levy named Stoneforge Mystic with his Phyrexian Revoker, those two creatures soon traded, and Kibler’s life total slipped to 16 as Levy followed with a Fauna Shaman.

As quickly as he could, Kibler turned the four lands sideways to sweep all those pesky creatures away with a Day of Judgment and the board was lands and a lonely Sword of Feast and Famine before Levy refilled with Birds of Paradise and a Stoneforge Mystic of his own searching up Sword of Body and Mind—now his only card in hand.

Kibler’s Squadron Hawk made the game seem like Judgment had never come. And his hand looked quite the opposite of his opponent’s—he still had Ratchet Bomb, Oust, and Divine Offering left in his hand beside the triple Hawks. A turn of Sword casting and/or equipping and soon the board was a powerless green mana Bird and an equipped Mystic for Levy against three powered Birds, one equipped for Kibler.

After a turn of trading, it was clear a 0/1 Bird would not be enough. With the Sword now operational, there was little Levy could do. He had attacked turn two with an Argentum-suited guy, but Kibler pulled it out anyway.

Levy finally got to go first, but had to keep his first Quest-less hand. Double Day of Judgment and a Ratchet Bomb for Kibler was a very quick keep, especially after Levy’s trip to the tank was a clear indication his opponent probably wouldn’t kill him on turn two.

Though hawks of the Squadron and Glint varieties came down in a flurry and were aided by Vengevine, it was nothing compared with Games 1 and 2, so Kibler gladly soaked up 13 damage the first few turns and calmly laid his first Day of Judgment while ticking his Ratchet Bomb up to two counters. 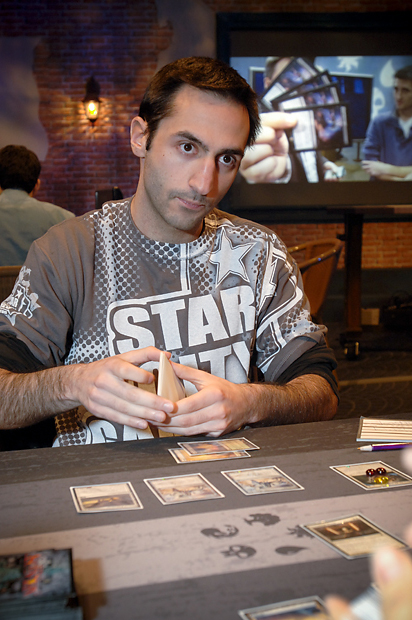 Raph Levy, with his trademark stare.

Dual Squadron Hawks resurrected the Vengevine, sinking Kibler to 3, and now Kibler sunk in his chair. As he looked at all the cards in Levy’s hand, which were surely creatures, it was clear that Vengevine might be too much to overcome. A Preordain finally revealed Kibler’s first nonland cards since his opening hand, a Baneslayer and a Day of Judgment, and the spike-coiffed man went into the tank thinking how in the name of Arcanis the Omnipotent he was going to survive the next turn.

“What are the chances you’re out of creatures in that hand of four cards? Pretty low?”

Kibler let out a large sigh. He grabbed the Baneslayer, cast Day of Judgment #2, and hoped.

Levy flashed his hand—chock full of dudes—and it was over.

4 Quest for the Holy Relic
38 Cards

4 Vengevine 1 Sword of Body and Mind 1 Sword of Feast and Famine 1 Thrun, the Last Troll
53 Cards