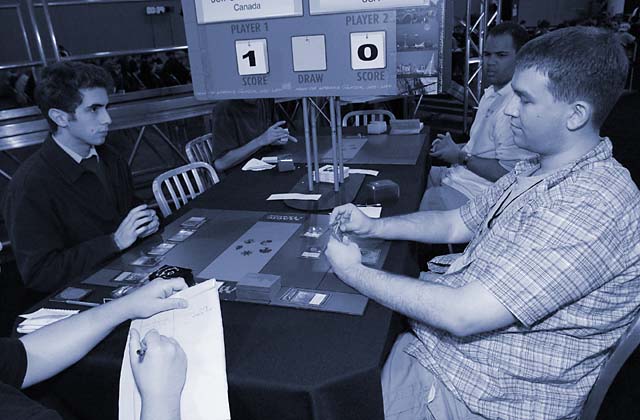 Each round in the feature match area the competitors were greeted with tiny candy pumpkins courtesy of Mark Rosewater. Jeff and Ken quietly ate theirs and settled in to listen to the antics of the others around them. By others I am of course referring to Osyp Lebedowicz and Antonino DeRosa.

Osyp: "Are the judges required to continually replace them?"

Antonino: "I am in a feature match-they would go broke!"

Jeff recently joined the YMG squad and his match with Ken Krouner was just one of two YMG/CMU-TOGIT grudge matches in the feature match area. Jeff explained that their personal rivalry has deeper roots than that. After dominating Ken in friendly drafts for years his streak came to an end when the two faced off for a Top 8 berth at GP: Los Angeles.

The two players are actually close friends and they enjoyed a laugh about the rivalry between the two teams. They noticed that neither of them was wearing their team shirts. "They didn't give me one," explained Jeff. "I am only a junior member."

"My TOGIT shirt is being made as we speak," grinned Ken.

"I hope I don't fall off the tour before they finish it," joked Ken who has found it difficult to reconcile the demands of a new full time job with the rigorous play testing that the Pro Tour demands. He had barely even played with his Tinker deck before this week.

Jeff brought his Psychatog deck to the YMG group but he was the only member of the team playing it. "Same old story."

Ken looked at his opening hand and slammed it back down on his deck looking for a better batch, "C'mon six! Always better than seven!"

When he quietly contemplated his next set of cards Jeff suggested shipping it back as well, "Five cards won't kill you."

"That is not a question. The question is will these six cards kill me?" 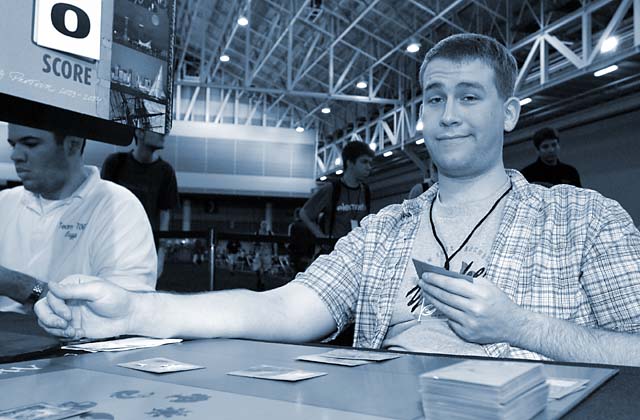 Ken ultimately decided to keep his six and Jeff was content with his seven cards. Ken opened with a Rishadan Port but had no second land. Jeff cycled a Lonely Sandbar is if to taunt Ken with his abundance of lands and made a Psychatog on turn two courtesy of Chrome Mox.

When Ken missed his next land drop he shook his head and looked over at Osyp, "This is going to be a good one." He had to discard on his next turn when he was still missing lands and Jeff cast Fact or Fiction taking a Daze and two lands over a Counterspell and one land. "Can I discard now, please?"

Jeff Vampiric Tutored for Fire/Ice on his upkeep and imprinted it up on an Isochron Scepter. He used on Ken's upkeep and tapped the Port drawing a card in the process. Ken's deck offered him a Seat of the Synod off the top. Jeff played another Tog and tapped down Ken's blue source on his opponent's upkeep.

Ken had his third land-a City of Traitors-and played a Grim Monolith. Jeff had to think and finally he returned an Island to play Daze. Ken paid for it but Jeff had another and countered the Monolith. "I'm pretty sure you are dead."

Jeff counted off the cards in his hand and graveyard and Ken conceded. "Apparently I should have shipped that one back."

Ken mulliganed again this game but was comfortable keeping his six-card hand. Jeff was only holding one land himself but he did have a Chrome Mox and was on the draw. He kept as well. 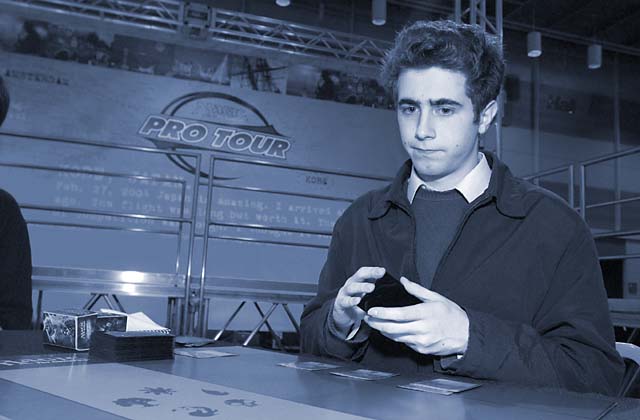 Ken opened with a City of Traitors and a Grim Monolith. Jeff pitched a Tog to his Chrome Mox, which would allow him to cast either Vampiric Tutor or the Counterspell in his hand. Ken showed his rust on the next turn when he played an Island and forgot to tap his City of Traitors before he sacrificed it. Jeff countered the Thran Dynamo that Ken attempted and he drew another land to play on turn two.

Ken played another City of Traitors and placed a Tangle Wire on the stack. When Jeff did not react, Ken nudged the card toward Jeff who was not ready to let it resolve, "Thinking..." When he determined that Ken was only holding two cards he let it resolve and Cunning Wished for Shattering Pulse. He Tutored for a Bloodstained Mire on his upkeep and sent the turn back to Ken.

Ken was also tapped out under the Tangle Wire and he had no play. Jeff Brainstormed and played a Chrome Mox imprinting Fire/Ice. Ken found an Ancient Tomb and he was able to use it and his City of Traitors to untap his Monolith. Jeff was biding his time on the Shattering Pulse and passed the turn back.

When Ken found a Key he was able to cast a Phyrexian Colossus but Jeff had the Counterspell. He tapped out on his upkeep to Shattering Pulse the Monolith while the Tangle Wire was down to one counter. Ken played a Rishadan Port and when he used it on Jeff's upkeep the Canadian Pulsed the Key with Buyback.

When Ken attempted a Stroke of Genius for two at the end of Jeff's turn it was met with a Fact or Fiction. Jeff took the pile with a Lonely Sandbar and a Fire/Ice and then returned an Island to Daze the card drawer.

Jeff played an Isochron Scepter imprinting Fire/Ice over the next two turns and it looked like he had the game locked up. Ken played a Chalice of the Void for two and waited for the inevitable counter but there was none forthcoming and suddenly Jeff's Scepters were useless as was the Shattering Pulse in his hand. Ken sat up straight and suddenly saw a chance to win what he thought was an unwinnable game. He played a Platinum Angel and passed the turn.

Jeff Brainstormed for answers and found only Energy Flux but Ken was willing to pay the six mana necessary to keep his Angel, Dynamo and Chalice in play. The Energy Flux took down Jeff's two Scepters and one of his Moxes. Ken started getting in for four a turn with the Angel.

Ken managed to keep Jeff away from any blue mana with a trio of Ports and within a few turns he had pulled it out. Osyp was shocked, "You won that one?"

Ken was reinvigorated by his victory and urged Jeff to have a similar draw for game three, "Just keep not drawing counters, ffeJ!" With the match on the line the rivalry that they both downplayed early suddenly seemed more real, "I didn't mind losing to ffeJ before but now that he is YMG… At least he is not wearing that shirt. Seeing Jon Finkel walk in with the shirt just broke my heart."

Jeff was fine with his seven but Ken had a question for the feature match area, "Guess what I'm going to do?" He shipped his seven back for the third time in the match and kept his next six.

Jeff opened with a Brainstorm and imprinted a Tog on a Chrome Mox. His mana acceleration was set back a turn when he Dazed a turn one Grim Monolith. When he replayed his Island, Jeff became the first person to imprint the much-ballyhooed Boomerang on an Isochron Scepter in a feature match. Ken had another Monolith as well as Voltaic Key and Tangle Wire.

Jeff used his Scepter to return Ken's Ancient Tomb for the next couple of turns but Ken played another Monolith and was able to advance his board position despite the Boomerang on a stick. Ken Tinkered the Tangle Wire away and found a Mindslaver and activated it. Other matches were wrapping up and the rails around the feature area were filling with competitors. Ken's teammate Gerard Fabiano shouted out, "KK, get up. Run around!"

Before Jeff handed the turn over to Ken he cast Vampiric Tutor leaving him only a Daze in hand. "I actually get to see what you tutored for this time," leered Ken-it was a Swamp. He used the Scepter to return itself to hand and replayed it and dazed it paying the mana but he did not imprint. Jeff was out of cards and Ken played a Myr Incubator on the next turn and made twenty-three Myr a turn later.

After the match Jeff revealed that his deck had no answer for a Chalice of the Void set to two-not even a Rack and Ruin.