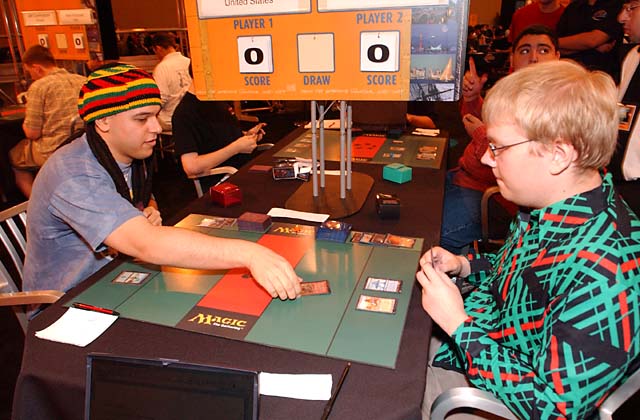 Arguably, Justin Gary is the most successful Extended player in history. He's won a Masters and a Pro Tour in this format, and did both with the same deck- Oath of Druids. So, it's not surprising that even in this environment filled to the brim with artifacts, Gary is running what he's familiar with. This is not to say that he came unprepared, as his deck has its fair share of artifact removal, and got a boost from Isochron Scepter. Walamies is playing the red/blue Goblin Welder/Mindslaver deck, which can turn opponents into spectators when it gets going.

Walamies had a first turn Goblin Welder, and Gary played an island and Chrome Mox. City of Traitors and Grim Monolith led to Walamies casting Tinker, which was Counterspelled. A Grim Monolith was countered with Forbid, and Gary played Treetop Village. An artifact land gave the Welder something to work with, as it got a Grim Monolith out of the graveyard, which led to Chromatic Sphere and Mindslaver. On end step Gary cast Cunning Wish, getting Shattering Pulse. This let him destroy the Mindslaver with buyback, although Walamies still had the Welder to bring it back. If Walamies wanted to ever activate a Mindslaver, he would want an artifact in play he didn't care about, so that he could get the Shattering Pulse out of Gary's hand. This put him in a situation where he had to set things up a bit, so he cast Thirst for Knowledge, and used the Welder to get a fresh, untapped Monolith, which brought out Metalworker. 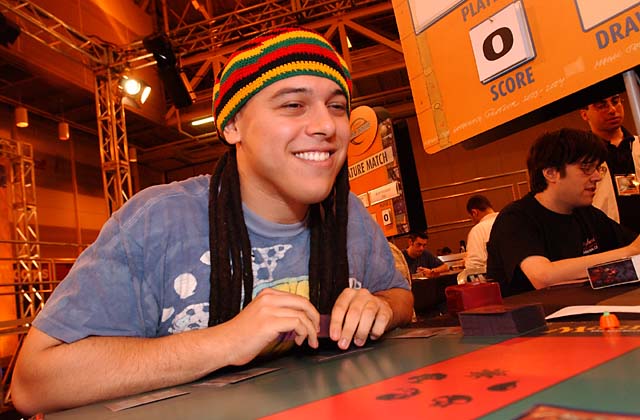 Gary untapped, and cast Cunning Wish to get the Fire/Ice under Chrome Mox (it was removed from the game for imprint), and used it to kill the Welder, taking Mindslaver recursion out of the picture. Walamies summoned Pentavus, which died to Shattering Pulse (but not before making a 1/1 flier). If buyback artifact destruction wasn't good enough, Gary put Counterspell on Isochron Scepter. One by one, Walamies' artifacts went to the graveyard, as the "Counterspell on a stick" made sure nothing changed. From this position, it was easy for Gary to send his Treetop Village in to do the rest.

Walamies started the game exactly the way he wanted to, dropping a first turn Defense Grid onto the table, followed by Tangle Wire. Metalworker followed, but died to Fire before it could become active. Just when it seemed that Walamies had the edge, Gary shifted the game advantage tremendously with Isochron Scepter, imprinted with Naturalize. Pentavus provided a reasonable threat for the situation, as it split into smaller tokens, making it harder for the Scepter to handle. It got through for damage and Tangle Wire would have made the board position ever better, but Gary had Counterspell. The Scepter took down the Pentavus, which made tokens before dying. The resulting attack brought Gary down to six, and another to one life point. Cunning Wish on end step got Moment's Peace to buy Gary a reprieve, and Walamies summoned Goblin Welder. Gary used Krosan Reclamation to shuffle the Pentavus back into the library where it couldn't be recurred, and Walamies' attack forced Gary to flash back Moment's Peace to stay alive. The Welder brought back Tangle Wire, and Gary conceded. 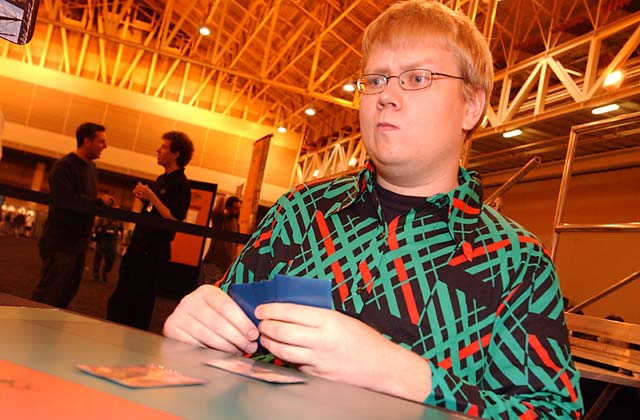 This time around, when Walamies played Defense Grid, Gary had Mana Leak. Metalworker resolved, and Gary played Oath of Druids. The Metalworker activated to show a hand of Citanul Flute, Mishra's Helix, two artifact lands, Grim Monolith and another Metalworker. The Helix was Counterspelled, and Citanul Flute resolved, getting Goblin Welder, which went right into play. Oath of Druids activated, dumping a significant portion of Gary's library into the graveyard, and bringing an 11/11 Cognivore into play. Walamies played Mindslaver and activated it, and used the remaining floating mana to get Pentavus with Citanul Flute. Gary was now in a bad position, facing down turns where Walamies could keep activating Mindslaver and mill away his library. Cunning Wish on end step searched up Krosan Reclamation, which targeted the Mindslaver, but in response Walamies put it into play with the Welder. On Gary's turn, Walamies activated the Oath, and rather than reveal his entire deck en route to being decked, Gary conceded.