After both players pile shuffled each other's decks, Tsukamoto's paper smothered Nagaoka's rock and so he chose to play first. His opening hand contained a Swamp, Mox Diamond, City of Traitors, Demonic Consultation, Illusions of Grandeur, Hoodwink and Duress. Everything he needed to win the game early as long as his opponent doesn't interfere and he could draw a couple more land. Playing the Swamp and Mox Diamond, Tsukamoto Duressed Nagaoka to get rid of any interference. Nagaoka ended up discarding Duress but managed to play a second one on his first turn, taking the Consult from Tsukamoto's hand. 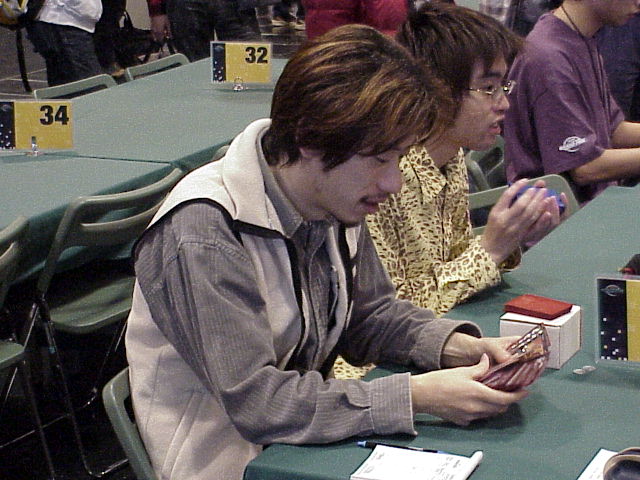 This gave Nagaoka several turns for his deck to take control as Tsukamoto didn't draw another land until turn four, though he did Hoodwink Nagaoka's second Thawing Glacier to try and slow him down. All Nagaoka could do with the extra turns is beat down with a Mogg Fanatic and Thaw out several Swamps and Mountains. Tsukamoto used Duress to remove Corpse Dance from Nagaoka's hand but couldn't do anything about the Phyrexian Plaguelord that came into play the next turn. Contagion gave Tsukamoto an answer but Nagaoka's second Corpse Dance brought the Plaguelord back during Tsukamoto's end step after "at end of turn" effects were resolved. Tsukamoto didn't seem too familiar with this special 6th Edition function of Corpse Dance but after reading the English version the judge assured him that the Plaguelord would stick around until the following turn.

Tsukamoto used a third Duress to get rid of an Urza's Rage and drew into a Consult that allowed him to play the Illusions of Grandeur as he now knew he could Consult for Donate the following turn and give Nagaoka an illusionary gift. Everything worked as planned and Nagaoka faced a two mana a turn clock as he tried to deal 30 damage to Tsukamoto before he ran out of mana to pay for the Illusions. Nagaoka's two Thawing Glaciers give him lots of time as he rapidly approached 12 mana and kept drawing land. Tsukamoto feared a second Urza's Rage - the only card that could have saved Nagaoka - but Nagaoka's deck failed to help him out and he conceded with 12 lands in play.

After a sideboarding session so lengthy that the judge started to nod off, game two began. Tsukamoto's opening hand contained Firestorm, Necropotence, Mox Diamond and four land. Not a great hand, but Necropotence makes every hand better than it should be. Unfortunately for Tsukamoto, Nagaoka cast Duress first turn and took the Necro. Tsukamoto did nothing for the first couple of turns other than lay land but Nagaoko couldn't take advantage of it as he cast only a Seal of Fire and Urza's Rage in the early game. Tsukamoto drew into a Vampiric Tutor that he used to get another Necropotence. The second Necropotence allowed him to draw six additional cards, a boon to any deck.

At this point things got very slow as Nagaoka spent six or seven minutes pondering his next play. The judge appeared to think that Tsukamoto was the active player as he finally got up and started looking at his hand to see what was taking so long. Eventually Nagaoka says "go" and Tsukamoto uses his six extra cards to really take control of the game.

Tsukamoto cast Illusions of Grandeur and in response to the "gain 20 life" come into play effect Nagaoka correctly Pyroblasts it in attempt to cause Tsukamoto to lose 20 life first. But Tsukamoto is prepared for this and uses Force of Will (discarding Donate) to put himself at 28 life. He then Vampiric Tutors and activates Necropotence 13 times, discards the extra cards and ends the turn with a hand containing two Force of Will, two Illusions of Grandeur and Donate - an almost invulnerable position.

Nagaoka attempts to Void, presumably for 0 to destroy both Mox Diamonds in play as that would prevent Tsukamoto from paying upkeep and casting Donate. But with two Force of Will and five blue cards in hand, Tsukamoto never finds out what number Nagaoka would have picked as he counters the Void and Nagaoka concedes the next turn.