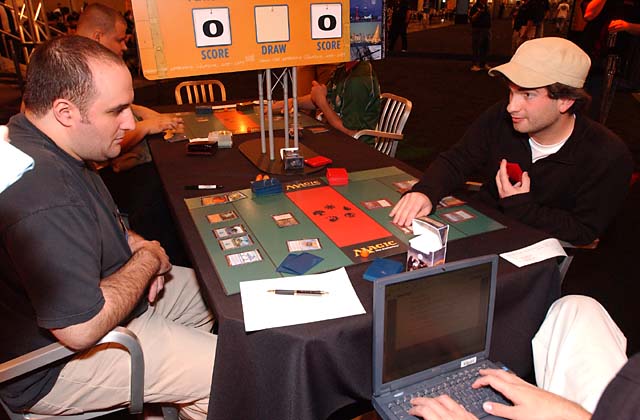 Gary Wise and Dirk Baberowski are former teammates meeting for the fifth time at the Pro Tour. Wise is up 3-1 in the series, although Dirk has the momentum with the most recent one being decided in his favor. At Pro Tour Chicago in 2000, Dirk actually taught Gary how to play his blue/white deck in the hallway before the tournament started. Specifically, he told him to bring in his Disrupting Scepters against Green/Red because you needed to knock out the Obliterates from their hand.

Of course they ended up being paired up in the Pro Tour that day, and Dirk was playing the Green/Red deck. Gary brought in the Scepters, knocked out the Obliterate, and won the match. This time they aren't teammates, however, as Gary is part of CMU-TOGIT while Dirk is still with Phoenix Foundation. They've both brought Tinker to the table.

As the players shuffled up, Mark Rosewater hurried over, asking, "Did you guys get your pumpkins?" They had not, so pumpkins were quickly brought over and placed at the appropriate places on the feature match area. Gary then ate one of them, prompting the following conversation:

Gary won the right to play first, but had to throw his first seven back. Dirk, in a valiant attempt to make him feel him better about it, offered the following advice: "A mulligan is an opportunity."

Gary, suitably impressed, responded with, "Could anything in Magic be more profound?" 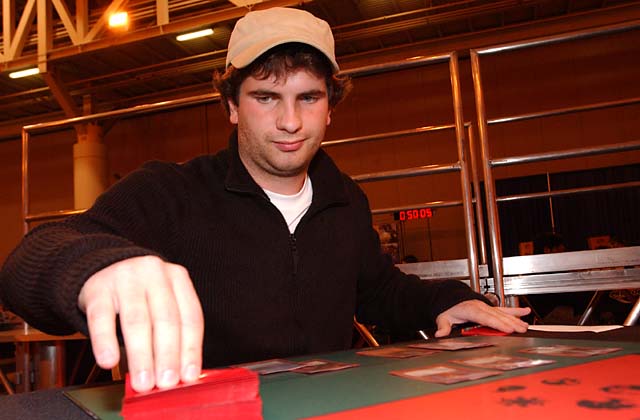 Gary kept the new hand and led with Ancient Tomb followed by a Chalice of the Void set to one. The players simply laid lands and said go for a few turns, until Gary Tinkered away his Chalice, finding a Gilded Lotus. Dirk could now play his Voltaic Key but still had nothing beyond that.

Phyrexian Colossus entered play on Gary's side of the table, although it didn't look too threatening when not backed up by a Voltaic Key. Dirk simply played out a bunch of artifact mana, said go, absorbed a hit for eight, and played a second Grim Monolith, bringing his total available mana to somewhere around twenty.

Gary: "Is one of those cards Upheaval and the other a threat?"
Dirk: "Nope."
Gary: "Good."

Unfortunately for Gary, one of them was Stroke of Genius. Thirteen mana was tapped into the pool and Stroke of Genius was cast for eight cards, leaving two colorless floating. Voltaic Key came down, untapped a Dynamo. Dirk sat there, thinking, and Gary swatted a fly that was buzzing around.

Dirk continued lamenting the quality of the cards in his hand, saying, "Wish I had a really good play right now." "I don't. I also wish I wasn't playing you. I wish I was playing some 11 year old kid from Somalia...I could beat him." Followed a minute later by, "With apologies to my readers from Somalia."

Dirk simply cast a Metalworker, and it was Gary turn again, but not before he cast his own Stroke on end step for five cards.

A Voltaic Key came down and untapped the Colossus, which then swung for eight, taking Dirk to 2. A Grim Monolith and two Tangle Wires followed, forcing Dirk to tap eight permanents on his turn.

He was able to leave two Keys and the Metalworker untapped. The Metalworker was tapped to produce ten mana, then nine more off of a Key, then again for a total of twenty-eight mana. Mindslaver was cast and sacrificed, giving Dirk control of Gary's next turn. With the rest of his mana Dirk cast Masticore and then Tinker, getting a Clockwork Dragon and immediately pumping it to 11/11.

At this point Gary offered the following: "Gary is starting to slump in his chair."

A moment later he chose to scoop in the face of a large dragon and the impending mind slaving.

Gary took out three Chalice of the Void, a Masticore, and a Mishra's Helix for an Oblivion Stone, three Chain of Vapors, and a Kill Switch. Dirk sided in four Annuls, two Gainsays, and a Mind's Eye.

Both players kept their hand and Gary led off with Ancient Tomb and Grim Monolith. On his next turn he played a second Ancient Tomb, prompting Dirk to remark, "I'm not even gonna have to attack you." He considered playing around Dirk's untapped Island (and the threat of Annul), but eventually he attempted a Thran Dynamo, which was indeed countered, so instead he played a second Monolith.

Dirk cast a Metalworker off of an Ancient Tomb of his own, but Gary had the answer in the form of Masticore. Dirk played out a Monolith and was done. Masticore entered the Red Zone for four as Gary hoped to end the game quickly, but Dirk of course had other plans.

He Tinkered away a Grim Monolith for Mindslaver and used it. Gary showed Stroke of Genius, but he had no blue mana, so Dirk couldn't get rid of it by casting it for zero. Masticore died to its upkeep, and as for the rest: 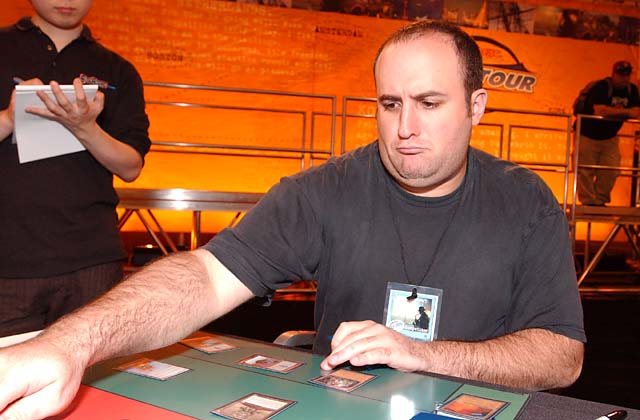 Dirk then cast Urza's Blueprints, a key card in the matchup. Gary still had no blue mana, and when he did draw a Seat of the Synod, Dirk had the Gainsay for his Tinker. He briefly considered using Voltaic Keys to cast Stroke of Genius that same turn, but opted not to as the damage from his Ancient Tombs would take him down to two. Instead he untapped, made ten mana (falling to four life), and cast Stroke of Genius for seven cards, followed by "Done."

Dirk then made sixteen mana, falling to four life as well, and cast his own Stroke of Genius for thirteen, but seemed unimpressed with the results. City of Traitors, Grim Monolith, Tinker for Voltaic Key, untap Metalworker, use it for ten, think some more, Tinker for Clockwork Dragon, two Tangle Wires, and a Grim Monolith all followed.

Rosewater proceeded to place six pumpkins on the Clockwork Dragon and four on each of the Tangle Wires, turning the board into a virtual feast. Gary used his untapped land to Chain of Vapor the Clockwork Dragon, then used some stack tricks to keep his Monolith untapped despite the effect of the Tangle Wires, and then played an Island, Voltaic Key, a second Monolith, and cast Tinker. This led to some thought. The two main options were Kill Switch, which would hopefully lock down the board long enough for Gary to get back into the game, or Oblivion Stone, which was a nice reset. Unfortunately Gary only had four mana available after the Tinker, so the second one seemed a little less impressive, and he chose to get the Switch.

This led to a number of turns where both players were locked down, but eventually Dirk was able to recast Clockwork Dragon. Gary untapped his Kill Switch and used it again to tap down the Dragon, but Baberowski was simply able to Tinker for a Voltaic Key, use it to untap the Dragon, and attack for the kill.

Since Dirk's deck was low on victory conditions and there was no way he could kill Gary the turn after the Tinker, the Stone may have been the better choice, but it's hard to know what would have happened.