I was ordered to give a shout out to Saimah, so here it is. 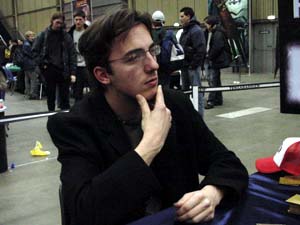 First discussion was how to decide who to go first. Olivier Ruel suggested Rock-Paper-Scissors, "Why not play rock-paper-scissors instead of magic". Eventually they decided to race to the end of the hall and back, seriously. Olivier won despite a last-minute slide from Quentin.

Once all the shenanigans had ended and Olivier recovered his breath the game kicked off.

Ruel kicked off with a Skirk Prospecter and followed with Mogg Flunkies. Quentin killed the Prospecter with Magma Jet and then Olivier missed his third land. A Meddling Mage from Quentin naming Goblin War Chief was especially annoying for Olivier and he showed me a hand containing three of them. A second Mage followed, this time set to Goblin Ringleader.

A Fire on a Piledriver kept the Flunkies out of the game as Quentin administered Meddling Mage beatdown. Ice tied down a Sharpshooter and then a Cursed Totem appeared to shut down any fancy creature abilities.

Ruel found an Aether Vial and had to patiently wait for three turns before it accumulated enough counters to bring a War Chief into play. A Skirk Prospector saved him the embarrassment of death to Mage beatdown and then the game started to swing back into his favour when War Chief's started jumping out of the Vial. Olivier got Quentin to pick the first one out of his hand and then showed him the other three.

Olivier was at three life, Quentin nine. The English player wasn't drawing anything though and the goblin horde quickly grew in size to overwhelm him. 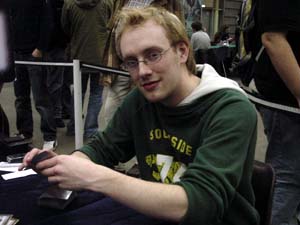 Olivier thought but then decided to mulligan a double Wasteland, port, no mountain opening hand. Both players then forgot to find land although Olivier was much the happier with Aether Vial. Quentin got a Sceptre down with Orim's Chant but was lacking mana. He had to tutor for a Chrome Mox.

An Overload took care of the Sceptre and now Quentin was facing down Flunkies and Siege-Gang Commander with an empty hand. Olivier ported three of Quentin's land during upkeep and the English player scooped after his library offered nothing useful.