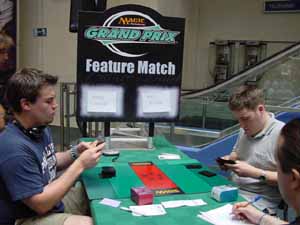 When you’re looking to pick out a feature match, there are some names that stand head and shoulders above others, and Brian Kibler and Kai Budde stand taller than most. With both players starting the day with three byes, they’re both looking to get their first victim out of the way and make a good start to their respective campaigns.

Brian played a Blue and White deck, with all the traditional white creature control tools and a little Blue control in Discombobulate and Complicate. Kai, to some surprise, played with Goblins but as he said “It’s not just Sligh, you have Siege Gang Commander.”

The coin flip went Kai’s way and he kept his opening hand, as did Brian and led off with a mountain and a Goblin. Next turn it was joined by another and a Clickslither the turn after thanks to a sacrificial Skirt Prospector.

Kibler found an Island and played out a Morph. “A fall guy,” he joked “You know what it is of course,” and passed the turn back to Kai. Kai dropped a second Clickslither and attacked with the pair of Insects leaving his lone Sledder at home and dropping Kibbler to nine.

Kibbler drew, played out his fourth land and thought for a while. He could leave some mana untapped or unmorph his angel. He tapped out, turned over the angel and swung in for four dealing his first damage of the day.

Kai took his time and decided to swing right back putting all his men into the Red Zone, knocking Brian to only six before dropping a Piledriver and Sharpshooter. Kibbler untapped, drew but had no answer for Kai’s army. They moved onto game two.

Kibbler reached for his deck box and started his boarding and his mid-game banter. “Very exciting game there.” “Well, that’s Goblins for you” Kai replied picking up his own sideboard. “I think I have a more predefined sideboard plan that you do” Kibbler shot back, knowing that the White Blue deck he was playing was a little rogue. “I pretty much know what you’re bringing in though” Kai smiled and started shuffling up for game two. 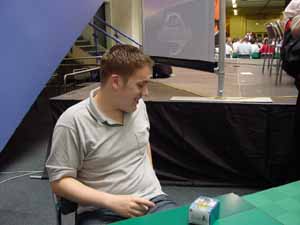 Brian bought in his Windborn Muses, taking out Stifles, Decree of Justice, and one Akroma. Hoping to slow Kai down and lower the overall cost of his spells. Kai bought in Shock, expecting Foothill Guides and other annoying, small critters. He took out a few goblins.

Game two didn’t start too well for Brian. He had to take a mulligan as his opening hand only had a single Plains and most of his remaining high casting cost spells. Kai kept his. Brian stuck on six.

Brian started, as most control decks do, by laying land and Kai cast the first spell again: a Goblin Sledder. A few turns later Kai played a Goblin Burrows to make his Sledder a bigger threat. Kibler couldn’t ignore it and used up a valuable Wing Shards to finish it off, leaving him in a good position – if a little light on land.

Kai’s next spell, a Clickslither, was countered but Brian had no counter for the Siege Gang Commander that following turn. He finally got a little luck drawing a Temple of the False God that allowed him to hard cast an Exalted Angel. Kai shot it down with two Goblins and a Shock before coming back in for another three. Kibler had an ace up his sleeve though: a second Angel which put him back in good shape.

Kai had answers of his own and Rorix joined his team and attacked. Kibler blocked the Commander and went down to four. Untapping he looked for an answer but could only play out a Windborn Muse, powerful in the early game but not so good if your opponent has laid a land every turn, as Kai had. He attacked with the Angel to bring himself back up to eight life before passing the turn.

Kai threw all of his men forward again, and Brian blocked the Dragon with the Muse and took another three damage as Kai pumped his Goblin and cast a Prospector.

Although low on life, Kibler wasn’t out of it yet and dropped a Silver Knight to slow down the ground attack and, this time, left the Angel back on defence. Unluckily for him Kai didn’t need to attack again, he had enough mana to cast a Siege Gang Commander and sacrifice goblins to kill Brian outright.