Technically, Yuuya Watanabe is still kind of Player of the Year, as the 2010 Player of the year race is yet to be resolved. On Saturday here in Paris Brad Nelson will battle Guillaume Matignon in order to claim that title. Until then though, Watanabe still reigns supreme. Watanabe had his allegiance clearly signalled with a Team Guillaume sticker on his deck box. His opponent, US Magic ringer Ben Stark, would likely be rooting for his countryman, Brad Nelson.

There was a swift deck check, and Stark seemed buoyed by getting through it penalty free.

“Did you hear what happened in Atlanta?” he asked. “I got a game loss for writing three Evolving Wilds and three Terramorphic Expanse, when actually it was four and two, a couple of rounds away from Top 8. Luckily it was against Polymorph, so I had a game to spare.”

On the play, Stark had the first action, with Seachrome Coast powering out a turn-one Ponder, and a second allowing for a Squadron Hawk. While Stark’s early game all came from Seachrome Coast (his first three lands), Yuuya’s progress was slowed a little by starting out on back-to-back copies of Creeping Tar Pit. He looked to win back some tempo on turn three by casting Everflowing Chalice for one, leaving him with Mana Leak mana up. 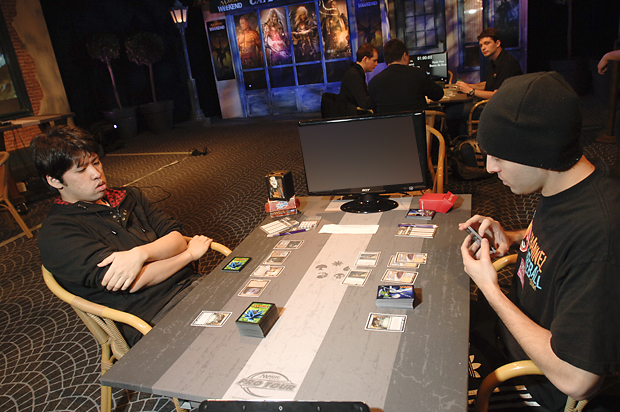 Yuuya Watanabe and Ben Stark settle in for a nice long war of attrition.

There was not a Mana Leak from Yuuya when Jace, the Mind Sculptor came along, though. Yuuya’s plan was different. He made the most of the fact that Stark’s Hawks were swinging in, leaving no blockers, and cast Tezzeret, Agent of Bolas. The planeswalker’s ability turned Everflowing Chalice into a 5/5, allowing it to kill Jace in spite of the fact that Ben had used the +2 ability to fix the top card of his deck.

Stark used his Hawks to off Tezzeret, and cast Gideon Jura, whose -2 ability killed off Everflowing Chalice. His little fliers were doing a good job of keeping the game in his favor, and keeping Watanabe on a clock. An Inquisition of Kozilek from Watanabe revealed that there was little more coming from Stark (making him discard a Squadron Hawk and leaving just one more and some lands), but the Japanese pro could not capitalise, with just a Sword of Feast and Famine for his turn.

Watanabe sighed to himself as he went to 9 from attacks from Gideon and the hawks. It may have sounded like an awkward beat combo, but it was one that threatened to end his game when a third Squadron Hawk hit the board. A second Tezzeret meant that the Sword of Feast and Famine became a regular 5/5 creature with no abilities. This was enough to kill Gideon, and prompted a block from Stark’s freshly cast Hawk.

Ben sensed blood in the water, and the Stark attack began with an activation of Celestial Colonnade. Gideon became a creature, but was soon killed when Watanabe used Go for the Throat to off the planeswalker. Stark killed his second Tezzeret of the match with attacks, and dropped Watanabe to 7.

Watanabe got his first hit of the game in to take Stark to 15, before casting Jace, the Mind Sculptor and Tumble Magnet. He used the Brainstorm ability to see some cards, and was happy to see his planeswalker survive (albeit on one counter) after attacks back from Stark.

Tezzeret proved to be the cat that came back, as Watanabe played a third copy, and used it to draw into a Ratchet Bomb. He attacked Stark to 10. Could the weight of planeswalkers from the Japanese player be enough to get him there? With Jace fatesealing Stark each turn, it seemed likely that the answer to this question was yes. It took just a couple of dead draws for Stark and big attacks from Watanabe to take the first game.

As Stark sideboarded for Game 2, he reflected on the game. “I think I must have punted somewhere there, but I don’t know where. You’ll tell me after the match, right?”

Watanabe just smiled. He knew he still had a game to win before he was ready to talk.

The second game saw an early Squadron Hawk from Ben, while Watanabe’s first play was a Ratchet Bomb. Stark seemed unconcerned by the bomb, merrily playing a Stoneforge Mystic into it, fetching a Sword of Feast and Famine. A Spell Pierce from Stark stopped Inquisition of Kozilek, while the Sword did a good job of forcing discard for Watanabe. 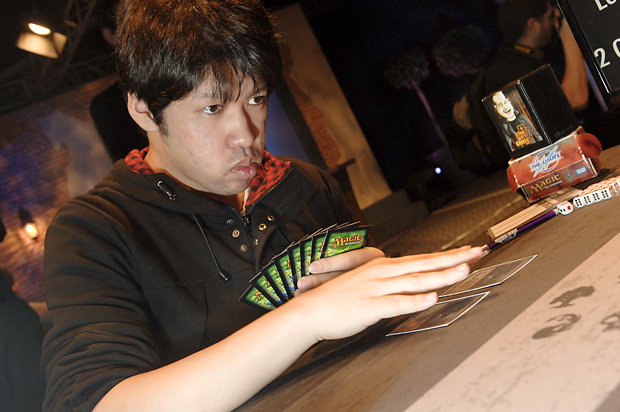 Where Yuuya is enigmatic ...

Another Spell Pierce stopped a Tumble Magnet, but Stark could do little to stop a Ratchet Bomb from dealing with his team. He simply waited and cast another Hawk. Mana Leak stopped another Tumble Magnet, and it seemed that Watanabe would be cold to the quick attacks from Stark. Each of his spells was being countered, and he was stuck on three lands, meaning that his options were highly limited. After a slow Game 1, the pair had a quick Game 2, which would lead to a decider.

A turn-one Duress from Watanabe showed a pair of copies of Preordain, Ratchet Bomb, Island, Seachrome Coast, Glacial Fortress, and Tectonic Edge. Watanabe took one of the blue draw spells. Ratchet Bomb came down without incident the following turn, but it was no answer to an Inkmoth Nexus coming in each turn, as even when the land is animated, it is still a land, and that is one thing that the bomb cannot blow up.

Looking to get back in things, Stark cast Stoneforge Mystic, fetching Sword of Feast and Famine. The white creature did not last long, dying to Doom Blade. Watanabe got Tezzeret into play through a Mana Leak thanks to Spell Pierce, and found a Ratchet Bomb of his own before Stark’s could blow up his planeswalker. Stark had Tectonic Edge ready for Inkmoth Nexus, leaving the only non-land permanent in play to be Stark’s Sword.

Watanabe swung in with Creeping Tar Pit, and had to look on as Stark was now the one to use Spell Pierce to force a planeswalker down through a Mana Leak. This time the planeswalker was Gideon Jura, who immediately grew to 8 loyalty to force Watanabe to attack with whatever creatures he might have. 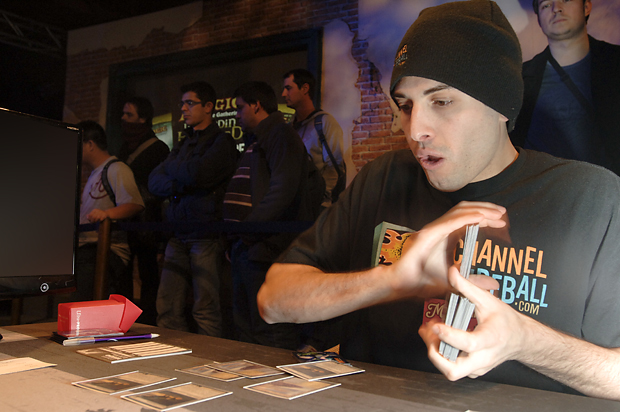 Gideon got to swing Sword of Feast and Famine the following turn, and while Tezzeret creating a 5/5 Ratchet Bomb did let Watanabe swing back to make Gideon’s size a little more manageable, he was still a little on the back foot, playing off the top of his deck. Stark sent a Celestial Colonnade at Tezzeret, drawing a block from Inkmoth Nexus, before using Gideon’s -2 ability to kill Ratchet Bomb.

Tezzeret’s +1 ability found a Ratchet Bomb, that Watanabe was not shy about casting. He seemed resigned to the death of his planeswalker, and put it in the grumper as soon as Stark sent his Celestial Colonnade in that direction.

Watanabe killed off Gideon with a Creeping Tar Pit attack, but slumped in his chair as Stark cast another copy of Mr. Jura. Just a swift attack later, with an empty hand, he scooped up his cards.