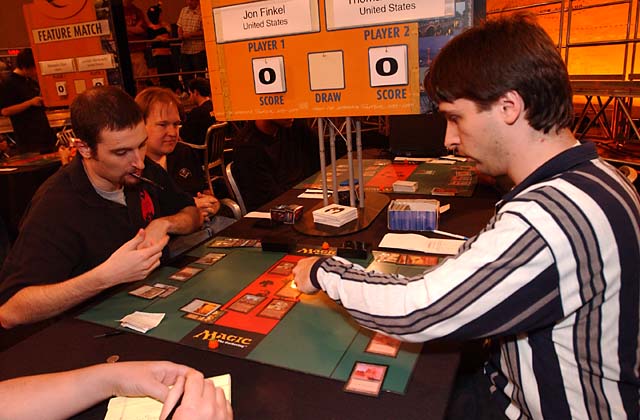 For the past several years the biggest weakness in Jon Finkel's Magic game has been Constructed formats. Jon would often find himself flailing for a deck hours before the tournament with little practice and no understanding of the metagame.

To avoid a repeat performance, Jon has joined up with Your Move Games. Not only is he playing one of their decks-Scepter Oath-but he even participated on their mailing list and was an active participant in the team's work on the format.

His opponent is teammate Tom Guevin. Tom developed the Food Chain deck that was undermined by a tech leak. While the rest of the team abandoned the deck in favor of Scepter Oath, Tom stuck to his guns and played his explosive take on the Japanese Gob-Vantage deck.

The two players just tested the match-up against one another the night before when Jon had come out on top. "He beat me three to one last night but I am hoping to change that up a little today."

Both players were already saddled with two losses and Jon seemed cheered by the memory, "Oh yeah, I did." 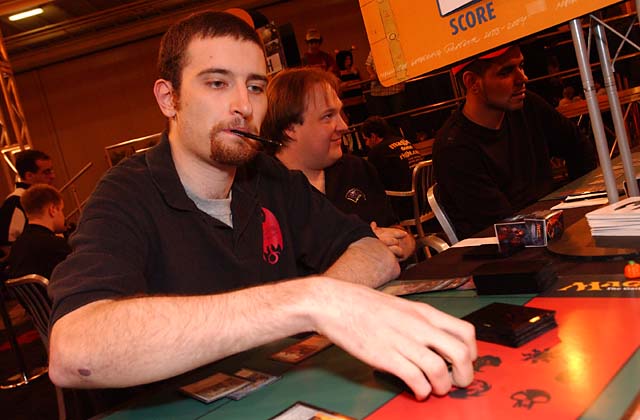 Jon rolled a die and then Tom went through his dramatic die roll, which involves tossing the die twenty feet in the air catching it and tossing it onto the table. After all that work he was understandably disappointed to lose the roll. "Very huge."

Jon had to send back his first two hands and eventually settled on a one-lander. Tom was fine with his and the match was underway. Jon led off with a Yavimaya Coast and Tom played and used a Wooded Foothills to play Mogg Fanatic. Jon found a Shivan Reef on the top of his deck and was able to Counterspell the Goblin Recruiter that Tom attempted on the next turn.

Jon dug into his deck with Brainstorm and Tom nodded, "At least I'll know how to split the Fact or Fictions..." Jon played a Chrome Mox imprinting a Cognivore and played a Treetop Village but he only had one card left in hand.

Tom played a Goblin Ringleader off of an Ancient Tomb and picked up a Goblin matron for his troubles. When he announced his attack step Jon used the blue end of Fire/Ice to tap the 2/2 haste creature.

Jon had another Brainstorm and was close to being able to play an Isochron Scepter with Moment's Peace. When Tom attacked him on the next turn he activated his Treetop Village and blocked the Fanatic. When Tom stacked damage and shot the Treetop Jon slumped a little in his seat. He needed four mana to play his Scepter and activate it. Tom used the Matron to find another Fanatic and polished off the Village.

Jon did not have his fourth mana on the next turn and had to play the Scepter and hope for the best. Tom played a Goblin Warchief and was about to seek out a Recruiter with another Matron, "I'm going to stack my deck and-Oh wait! I'm just going to kill you."

Instead of the Recruiter, Tom grabbed a Piledriver and played it. The ensuing attack was enough to kill Finkel who needed one more mana to activate his Scepter. 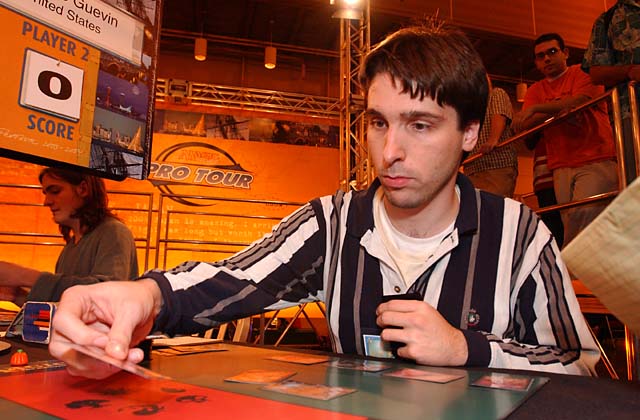 While they shuffled Tom teased Jon about getting Magic through the Dark Ages before it had any other superstars, "Johnny was like the Magic Johnson/Larry Bird of Magic. If you are the Larry-I'm sorry. You were Magic Johnson-who was Larry Bird?"

Jon had no answer handy and just shrugged and offered, "Justice?"

Tom train of thought jumped a rail and he shifted the conversation to Game 1. "I thought you were slow rolling the Oath."

Jon sighed, "My first two hands had Oath." As if on cue, Jon had to mulligan again.

Tom kept at Jon, "All you need is two lands and an Oath."

Jon was no doubt aware of all the Naturalizes that Tom had brought in for the second game, "Oath is a better Game 1 plan."

He kept his next six and opened with a Chill thanks to a Chrome Mox imprinting Krosan Reclamation. "That's why he is Jon Finkel!" Tom exclaimed to the onlookers.

Jon was not as impressed, "I don't have much left."

Tom scrunched up his face and had to concede, "At least that Krosan Rec is gone."

Neither player did anything but lay land for a turn. Jon had no turn four mana and played a Scepter imprinting Brainstorm. Tom Mogg Salvaged the Scepter and Jon reminded him to pay the two. Tom had forgotten about the Chill. He had the mana to pay for it but he also wanted to Naturalize the Chill. If he had done them in reverse order he could have done both but he had to pay two for the Salvage despite trying to find a way for the judges to make him take it back.

He untapped and Wastelanded the Yavimaya Coast and Naturalized the Chill sending the turn back to Jon who had no cards and barely any permanents. Freed from under the Chill Tom was able to cast a Goblin Matron for a Ringleader.

Jon ripped an Oath of Druids off the top and played it. He sent the turn back to Tom with a wince, "Kill me?"

"I don't think so." Tom did have another Naturalize ready and cast another Matron for a Warchief. He plinked away for one with his Matron and sent it back to Jon who made a Treetop Village. When Tom played his cards out he was able to attack for eleven but Jon had the Moment's Peace.

"I figured that after you beating me like fifty times in a row I would get lucky."

"I got really, really lucky to win. Put that in the coverage."

Despite the leaks, Tom was disappointed that Jon did not play the Food Chain deck. "Nobody tutors and thinks ahead like Johnny Magic and that is what this deck does. It is the best deck stacking since David Bachman played Nate Clark!"