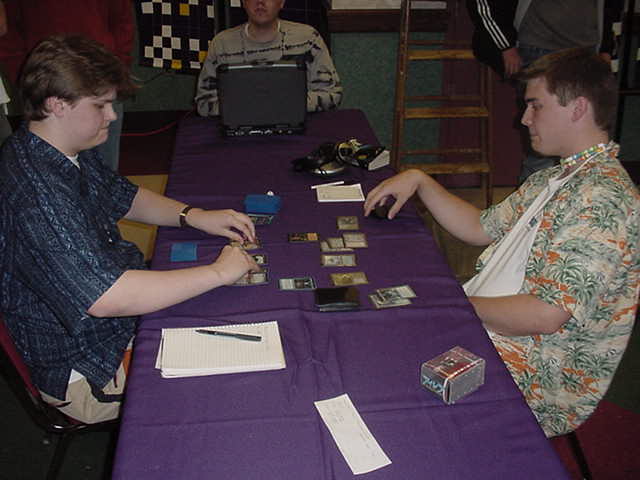 Two stars contended for dominance. On one side of the table, Brian Davis just finished in the Top 4 at PT Nice. Well known for his youthful exuberance and personality, he never fails to gain attention. Davis was packing the potent blue-red-white control deck so popular in Milwaukee. Goblin Trenches promised to send large amounts of tokens towards his opponent. Dragonlord, Handsome Man, and Ayatollah of Rock and Rollah Brian Kibler sat at the other side of the table. Well known for his writing, innovative deck designs, and love of big friggin' creatures, Kibler embodies charisma and confidence. Surprisingly, Kibler declined to play with large flying beats, and instead chose to run the widely popular Upheaval/Psychatog deck.

Davis won the roll and chose to play first. The early game was dominated by land drop after nerve wracking land drop. Davis finished the monotony by playing Compulsion, and forced it through by Memory Lapsing a Kibler Counterspell.

The fight for board dominance kicked off. Kibler untapped and played his fourth land, surveying the six counters in his hand, and passed the turn. Davis dropped a land, and at the end of Kibler's next turn attempted a Prophetic Bolt. But Kibler grabbed the opportunity to slow Davis's tempo and Memory Lapsed the Prophetic Bolt. The second time around, Davis's Prophetic Bolt was countered by a one-strength Circular Logic. Kibler then threw down a Nightscape Familiar. Davis took the opportunity to use Compulsion, cycling an Urza's Rage and Repulse away. 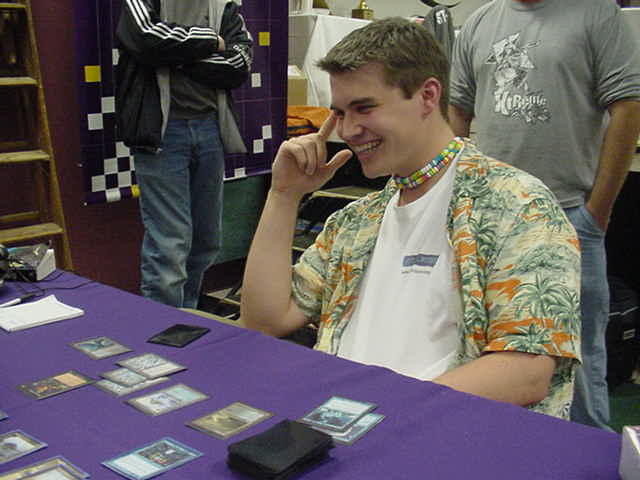 Kibler then turned up the heat, throwing down a Familiar. Davis continued to refine his hand, and Kibler turned up the Familiar beats. "First blood, raaaaaar!" Kibler tapped out to Probe with kicker, forcing Davis to discard another Urza's Rage and Prophetic Bolt.

This was Davis's opportunity, for Kibler had tapped out. With only a Fact or Fiction in hand and 6 land on the table, Davis took a chance. He untapped, and drew ... Goblin Trenches. If Davis played Trenches, he couldn't use Fact or Fiction. But if he played Fact or Fiction first and got a land, he could play the Trenches as well. On the other hand, if Kibler had an Upheaval in hand, Davis's goose would be cooked.

Davis took the plunge and played the Fact or Fiction. Kibler split the piles into Island, Shivan Reef, Counterspell, and Fire/Ice, Repulse. Davis grabbed the larger pile, played his seventh land, and threw down his Trenches.

Alas for Davis, his effort was for naught. Kibler had the Upheaval. He tapped out and reset the board, replaying an Island and Nightscape Familiar with floating mana. The Familiar continued to slowly gnaw away at Davis as both players replayed land after land. Kibler played a second Familiar, giving him major mana advantage. However, he only left two blue available.

Davis: "If ONLY I had the Fire/Ice!"
Kibler: (naggingly) "You didn't take it when I gave you the choice..."

Kibler continued to keep up the death of a thousand cuts with the Familiars. He opted three times in a turn, and played a Psychatog that was met with a Counterspell. Kibler then attempted a third Nightscape Familiar, which saw a modest counterwar. Davis attempted to handle the Familiar Beatdown with Repulses, but couldn't get the job done. "I didn't even have to attack with a Psychatog," Kibler crowed.

Inbetween the games, the trash talk ensued. Kibler insisted that Sideboard honcho Aaron Forsythe photograph him with his t-shirt's CCGHouse.com logo clearly visible. Kibler also wanted to wish his greatest fan (his mother) reading at home a happy early Mother's Day, and recommended to the crowd Ender's Game, a fine sci-fi novel by Orson Scott Card. No word about the Nike sneaker deal, though.

The ills of outrageous misfortune continued to plague Davis in Game 2. He mulliganed three times before settling for a hand of Skycloud Expanse, Syncopate, Meddling Mage, and Repulse. 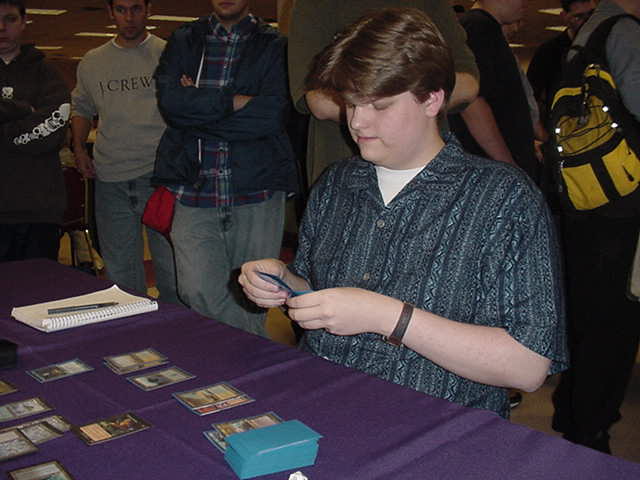 Davis failed to draw a land on his second turn and drew the dishearteningly slow Coastal Tower on his third turn. By the time he was able to play a Meddling Mage (naming Psychatog), Kibler had already played a Nightscape Familiar and Deep Analysis. Kibler played a second Familiar and then Lobotomized to show Davis' hand of Counterspell, Absorb, Repulse, and Syncopate. Trusting in his Familiars, he stripped the Repulses from Davis.

Finally, Davis managed to draw his third and fourth land. But it was to no avail. Kibler gained too much card advantage through Fact or Fiction and Upheavaled with double counter backup, and slammed down his Psychatog. Davis offered the handshake in concession.