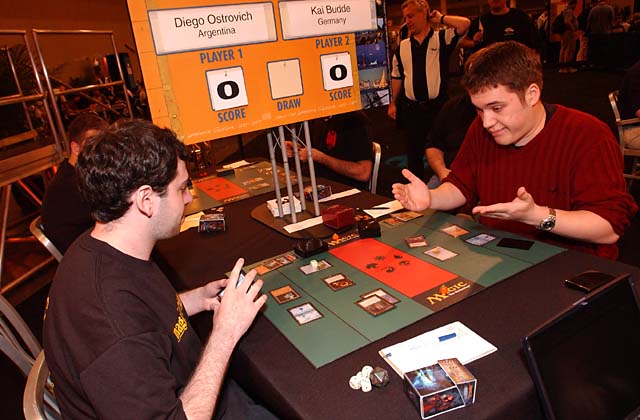 Diego Ostrovich had a solid season last year, especially on the Grand Prix circuit. Just as he and Carlos Romao made Latin American Magic a force on the Pro Tour at Worlds last year, they followed up with strong showings, proving that their success was not a fluke. Kai Budde, on the other hand, hasn't even won a Pro Tour this season! Granted, there's only been one so far, but after Phoenix Foundation steamrolled the competition on the way to Sunday, many assumed it was a foregone conclusion that they would three-peat. But, it was not to be, as they lost to eventual champions The Brockafellas- the result of which was so stunning that the crowd was silent in disbelief. Needless to say, it wouldn't quite be a Pro Tour season without Kai winning at least one of the events, and he's looking to do it here. With a record of 4-1, he's well on his way. 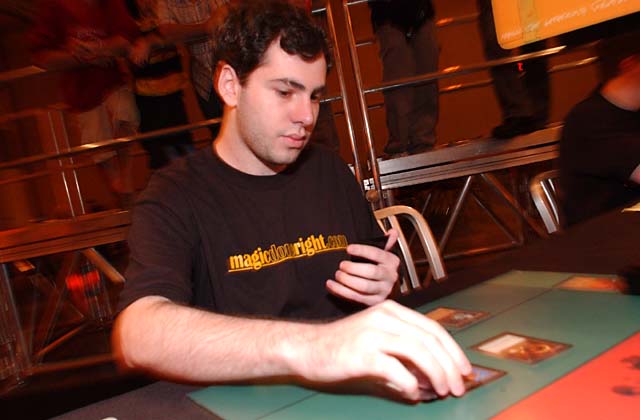 Both players mulliganed down to six. Ostrovich opened with Ancient Tomb and Grim Monolith, and Budde had a first turn Monolith as well off City of Traitors. Voltaic Key and Thran Dynamo gave Ostrovich more to work with, while Budde played Gilded Lotus and a Dynamo. Ostrovich was the first to use all that mana to play a big spell, casting Stroke of Genius to draw eight cards. He then played Chalice of the Void for one, and ended his turn. Budde Tinkered for Mindslaver and activated it, looking at Ostrovich's hand of island, two Chalices, two Dynamos, Masticore, Tinker and City of Traitors. The Dynamo was Tinkered into Grim Monolith, as Budde lamented, "There's nothing in there that kills you." A Chalice came out on four, nullifying most of Ostrovich's hand. Budde followed up on his turn with Mishra's Helix, which wasn't terribly threatening since Ostrovich had a Key and two Monoliths. He played his third Chalice of the game, setting it to three.

The game slowed to a crawl at this point, as Budde merely drew a card every turn and used the Helix on Ostrovich's upkeep. Eventually he found Stroke of Genius, and used it to draw seven cards, but it didn't do much good. Ostrovich cast an Upheaval and floated plenty of mana, and Budde responded by Stroke of Genius to draw six cards. With the mana he had left, Ostrovich played three Monoliths, two Thran Dynamos, Voltaic Key, Masticore and Chalice of the Void set to two. On the following turn, the Masticore attacked for four, and Ostrovich played another Chalice set to four. With his options severely limited, Budde cast Tinker to get a Thran Dynamo into play, and a third Voltaic Key let him play Gilded Lotus. Meanwhile, the Masticore was attacking every turn, and Budde would need to find an answer or a massive threat of his own. He found one soon, casting Upheaval with lots of mana to spare. All the mana producing artifacts came right back to the table, along with Damping Matrix. Ostrovich rebuilt fairly quickly, using Ancient Tomb to play Grim Monoliths, Thran Dynamo and the Masticore. As soon as Budde saw that Ostrovich remembered to discard, he conceded.

Both players had Voltaic Keys on their first turn, and Budde followed up with a Monolith, and Tinkered it to get Gilded Lotus. This let him play Mindslaver, while Ostrovich had nothing more than three Keys in play and some lands. Stroke of Genius gave Budde five more cards, and Clockwork Dragon came out soon after, forcing a third game. 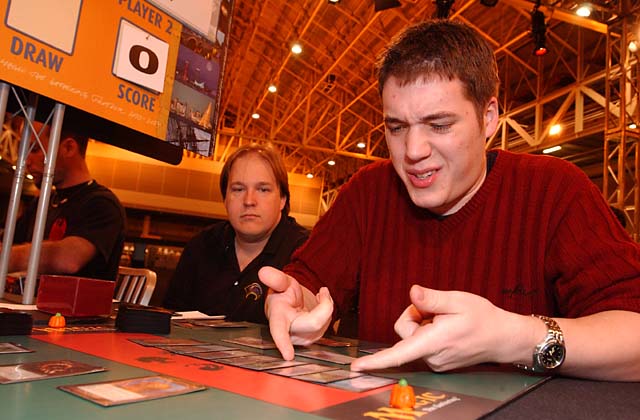 Ostrovich played Kill Switch, and Budde accelerated quickly with Grim Monolith and two Dynamos. Damping Matrix came out a few turns later, making Ostrovich's Mindslaver less than impressive. However, thanks to Stroke of Genius and Metalworker, he was able to produce lots of mana and cast Upheaval, playing two Metalworkers after it resolved along with two Thran Dynamos, Voltaic Key and Kill Switch. When Budde replayed all his mana producing artifacts capped off by Damping Matrix, Ostrovich had Annul waiting. He then untapped and drew nineteen cards off Stroke of Genius, leaving Voltaic Key free to untap a Metalworker. The activation produced 28 mana, and Ostrovich played Mindslaver and activated it, followed by another Key to untap the Metalworker and produce even more mana. Clockwork Dragon, and another Mindslaver followed. The mana left floating pumped up the Dragon enough to convince Budde to concede.