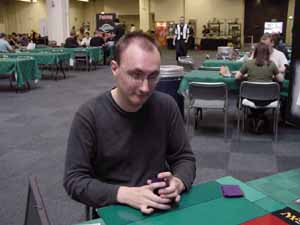 For all those dark long years where mountains were forgotten and Goblins hidden in deep dark caves Paskins has been carefully and patiently subverting the WotC R & D department with cleverly trained Goblin Operatives. A carefully programmed plan of assassination has decimated the wizards of Blue and now his horrible schemes have borne fruit. Goblin War Chief and Siege Gang Commnder have escaped the net and Onslaught block is now infested with little red men. And now the Goblinmaster returns to reap the rewards of his diabolical plotting.

His opponent is Christoph Hölzl, a German who ran the tables at last year’s GP, notching up an incredible 14-0 record before eventually falling in the finals to Jakub Slemr. He is also playing Goblins, but unfortunately for him chose to pollute the simplicity of mono-red with black and blue for Patriarch’s Bidding and Read the Runes. While this makes the control matchups better it turns the matchup against the straight red version a nightmare.

Paskins won the die roll and elected to play. He cycled an Incinerator on turn 2 and then dropped the dreaded turn 3 War Chief followed by turn 4 Siege Gang Commander. Hölzl dealt with the tokens by following his own War Chief with a Sharpshooter.

Paskins kept him firmly under the kosh with a Clickslither and when two goblins followed to provide food for the insect they were rapidly onto game 2.

After boarding things get much better for the German as he is able to board out the useless Biddings and Read the Runes and try and fight on even terms. 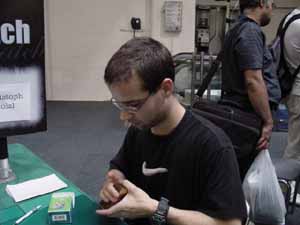 Paskins replaced 3 Sledder and 4 Piledriver with 4 Shock and 3 Starstorm. Hölzl chucked out the useless Bidding and Read the Runes as well as the Prospectors to replace them with Carbonize and Goons.

Game 2 was just as swift. Hölzl Carbonized Paskin’s early threats of a War Chief and ClickSlither. He then cast a Siege Gang Commander.

Unfortunately that was the last spell he cast. Paskins Shocked the Commander and then took three from the tokens while he waited for his Sharpshooter to come online. The goblins went down in a hail of gunfire and the situation worsened for the German as a second ‘shooter appeared with a Pospector for company. Hölzl passed another turn without casting anything. This allowed Paskins to “ritual” out Rorix with the Prospector. Another useless drawstep and that was game and match to the evil Goblinmaster.