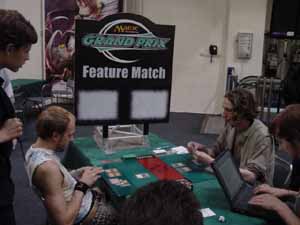 Ireland’s Stuart Shinkins has come busting retirement to find himself playing for Day Two of this Grand Prix. Unfortunately for him Pro Tour Champion, Eivind Nitter, is in his way. The loser of this match will find himself on the sidelines spectating tomorrow.

Both players kept their opening hands, Nitter playing first but it was Shinkins with the first spell of the match, a Silver Knight. Nitter’s third land came into play tapped, a sure sign of imminent mana trouble. Nitter matched Shinkins’ morphed Exalted Angel with one of his own, but held his back the following turn due to his fourth land being a Temple of the False God; Nitter neglected to attack with his either, having peeled the land he need to unmorph his flying, life-gaining monstrosity.

Stu found his next two land but did nothing except unmorph his Angel. Nitter was forced to main phase cycling to keep up the all-important mana war. An end step cycled Decree of Justice from Shinkins put four crudely torn paper soldiers into play. A top decked Dragon Scales was slammed onto the Irish Angel, which immediately took uncontested to the Red Zone, leaving the life totals 25-11 in Shinkins’ favour.

All of Shinkins’ men leapt forward to attack the following turn, Nitter cycled a Decree for two Soldiers of his own which blocked their brethren and the blocking Angel took down the Knight but the Norwegian’s life still dropped. 30-8.

Shinkins committed a Dawn Elemental to his already dominant board position, muttering as he did so that he was over-committing, but Nitter had not drawn an Akroma’s Vengeance despite his furtive early game cycling. Nitter could only muster an Astral Slide in defence.

Shinkins threw caution to the wind. Slapping Akroma, Angel of Wrath directly into the Red Zone along with the rest of his army. Nitter cycled a Decree of Justice and used the two soldiers he created to block some of Shinkins’ men, he then announced that the Slide trigger would target the Akroma. Shinkins pointed out that he had already declared the soldiers as blockers and had passed his chance to use the Slide’s triggered ability. Nitter realised his error and conceded.

Nitter kept a very risky hand, something he’s famous for doing. It had a Plains, a Temple of the False God and an Eternal Dragon as his only mana sources. Typical of his luck, he ripped another Plains and set himself up for the game.

Nitter made a Slide and backed it up by a morphed Angel. Shinkins sat there calmly, simply laying a land, apparently unfazed. Nitter, fearing a Wing Shards or possibly a Temple enhanced Vengeance neglected to attack with his Angel, choosing instead to cycle Decree of Justice at the end of Shinkins’ main phase to make three soldiers and using the Slide to ‘unmorph’ his Angel. Nitter’s first attack of the match left the life at 24 – 13, his favour.

Shinkins attempted a Vengeance but Nitter had the cycling card and all Akroma’s anger did was kill the soldiers and the Slide. Nitter untapped, cast another Slide and attacked. Shinkins cycled a main phase Eternal Dragon and passed his turn, holding Decree of Justice, Dawn Elemental, Pacifism and another Dragon in his grip. 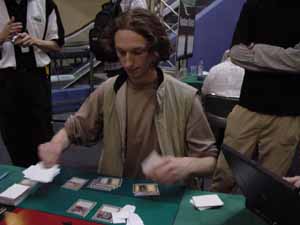 Nitter respected Shinkins’ bluff and did not attack with his Angel into Shinkins’ untapped land. The Irishman made two soldiers at the end of turn. The game was hotting up, both players has two Dragons on the go and a multitude of mana, but Nitter was firmly in control, his Slide and Angel dominated the board.

The Dawn Elemental came into play for Shinkins, whose soldiers had steadily been destroyed by the Slide as a result of random cycling effects on behalf of both players. In Shinkins’ end step, Nitter ‘Slided’the Elemental with a regrown Dragon and his Angel attacked uncontested. He did the same the following turn, knocking Shinkins to one.

Nitter upped the ante with a second Angel leaving two mana open, Shinkins followed suit. Shinkins was desperate, he nervously fingered his Vengeance, but the two mana was enough to convince him to play a Dragon instead, but it was simply delaying the inevitable. Nitter’s Slide took out all of Shinkins’ blockers a turn later and the Norwegian took the second game after half an hour of play.

The speed of the player’s shuffling and this reporter’s typing greatly increased for the third game as only nine minutes remained on the clock.

Nitter was the first on the board with a turn three morph, no prizes for guessing its identity. He decided again not to attack on his fourth turn into Shinkins land. Turn five saw Shinkins pass over his turn even with a Temple as his fifth land. Nitter’s Angel remained back. Shinkins contributed a Knight to the board but continued to sit back leaving his mana open. Nitter cycled a Dragon so as not to miss a land drop, his Angel stayed back once more. 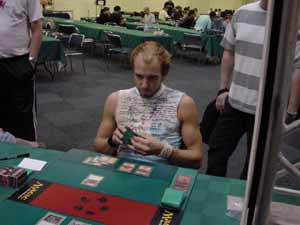 With five minutes on the round, Shinkins made a Temple-accelerated Akroma and held back. Nitter Vengeanced. The Irishman made a Dawn Elemental and passed back the turn. Nitter Wing Shardsed the critter when it swung.

Play speed increased rapidly, Nitter made a Dragon and passed. The end step saw Shinkins making eight soldiers, he untapped and Dragon Scalesed three of them and swung. A Decree for six from Eivind chump blocked, he fell to eighteen. He Dragon swung back before a Vengeance from the Norwegian cleared the board.

Time was called. The five turns passed without event. With a draw knocking both players out of Day Two, hands were revealed and Shinkins conceded. Nitter progresses to the second day. Shinkins’ best ever feature match performance remains a draw.