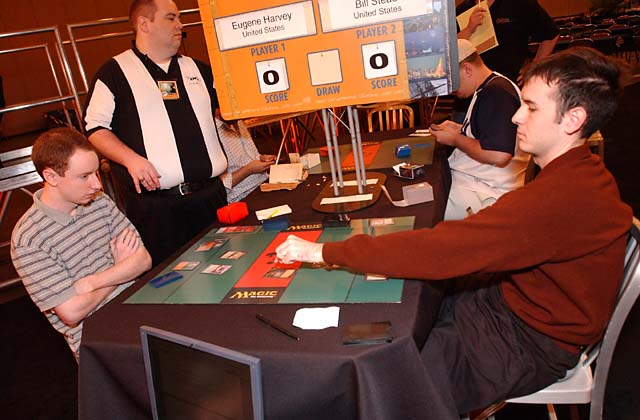 match featured Eugene Harvey, a previous US National Champion, squaring off against Bill Stead, another longtime pro. Both have a 6-2 record coming into this match. Eugene has brought CMU-TOGIT's version of Tinker to the table, while Bill is playing Angry Hermit with Akromas and Sliver Queens.

Bill Stead began by de-sideboarding from his match yesterday, while assuring Eugene that they don't need to worry about time by saying, "Don't worry a bit, the longest it's been is thirty minutes left in the round." As they began shuffling, he added some comments on how much of a coin flip this match-up can be, which he obviously wasn't happy about.

Eugene was his usual quiet self. 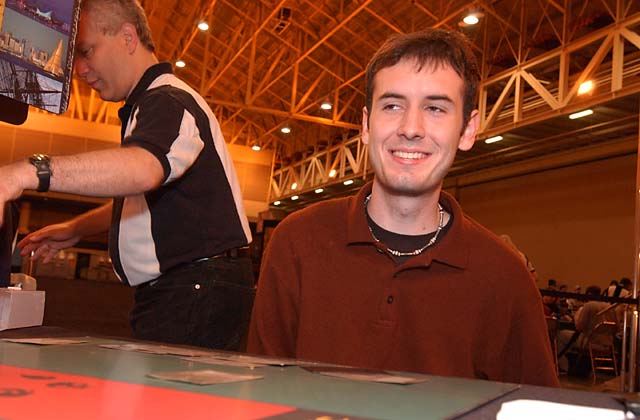 Bill's first hand was a nice one except that it included only one land, a Llanowar Wastes. It also had two Cabal Therapies, a Hermit Druid, and other goodies, but he had to ship it back. The forbidden peek showed that he had a mana source on top of his deck. Ah well.

The next one resembled a good Poker hand, in that it only included three copies each of two different cards. Only Underground Rivers and Cities of Brass showed up from the top of his deck. Down to five. Two lands, Sliver Queen, Mox Diamond, Akroma. Pretty terrible, but he had to choose to keep.

Eugene also opted to take a mulligan and the game started off on slightly more even footing. Bill's less than stellar hand meant he spent the first three turns just playing lands, while Eugene played out a Grim Monolith and Metalworker.

On Bill's fourth turn, he played Mox Diamond and a fourth land, then tapped out to hardcast Sliver Queen. Casual players everywhere rejoiced.

Bill: "The scary thing is, someone playing my deck has it, because they couldn't find the third Queen in time."

On end step, Eugene tapped out to Stroke for five cards. He pondered for a good while about what to do with his new grip, then Tinkered away his Monolith for a Myr Incubator and passed the turn back.

Bill untapped and placed Cabal Therapy on the stack. Eugene responded by showing three artifacts with his Metalworker and then sacrificed the Myr Incubator for twenty-six little guys. Game over.

Bill sided in two Naturalizes and a Serenity, while Eugene switched in a whole bunch of cards. 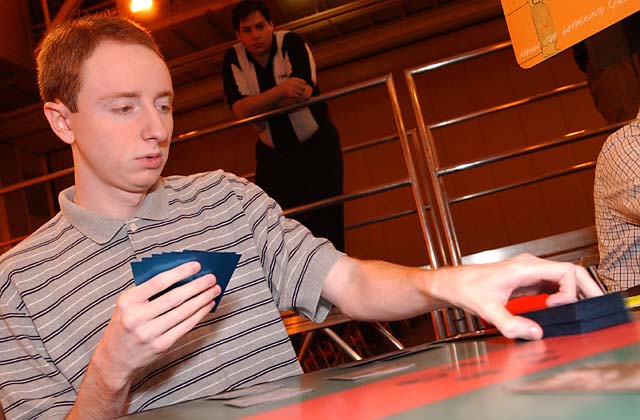 Both players kept their initial seven in this game. Bill led with Vault of Whispers, then Vampiric Tutored for Hermit Druid on Eugene's end step. Island followed by Hermit Druid hit the play mat, but a Chain of Vapor immediately sent the creature home. Eugene then played a second Island and a Grim Monolith.

Bill Duressed and didn't like what he saw. Seat of the Synod, two Chalices of the Void, Stroke of Genius, and Masticore meant that Eugene would definitely be able to kill the Hermit Druid next turn. He couldn't afford to give Eugene time to play a Chalice on two, so he took one of the Chalices and played out his Hermit Druid anyway.

Eugene performed the expected play of Seat of the Synod, then Masticore, shoot your Hermit Druid. The turn went back to Bill, and he sat in thought, remarking, "You've got one extra card in your hand? I may have to run the gauntlet." Looking over at Eugene's stoic face, he grinned, "You're a dirty man, Eugene, you're a dirty man."

What was the gauntlet? It became clear when Bill Reanimated his deceased Hermit Druid and then played out his brother, in hopes that Eugene wouldn't have drawn a fourth land to allow him to kill both of them. Eugene pitched a second Masticore to the first one, showing that he hadn't drawn a land yet, and then ripped the Island off the top. He killed both Druids and took Bill to 9 on the attack.

He shook his head, looking over at Eugene. "Chain of Vapor? I hate you."