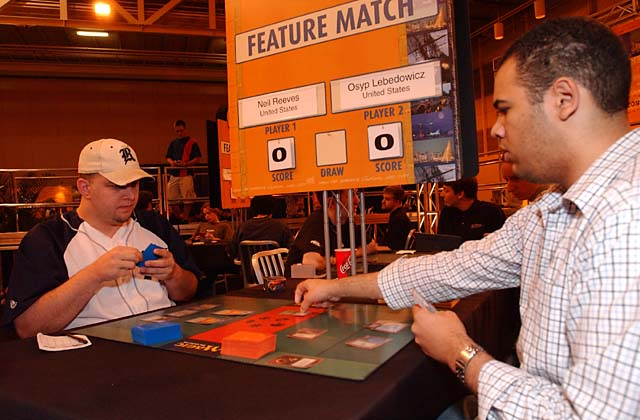 Reeves was at the center of controversy this weekend, playing a Your Move Games decklist that was leaked-a leak they were unaware of until they saw Neil and Bob Maher playing their Scepter-Oath deck during round one yesterday. If it was all the same to Neil he would prefer to be playing another deck-any deck really. He was moaning all weekend about playing an Oath deck in a field without creatures.

"It is pretty bad when you are pulling for Tinker to go second turn Metalworker-c'mon Metalworker!"

His opponent was Osyp Lebedowicz-or Osyp Lobodovitch as Neil calls him-and he was playing the CMU-TOGIT Tinker Chalice deck, complete with Oath enabling Metalworker. As Osyp sat down for his match he pulled out a ratty paperback book he bought from a street vendor. It was an adaptation of some horrible Phoebe Cates castaway movie from the 80's and Osyp was using the book to keep track of his life and to tear up for the occasional Tanglewire counter. The book was opened to a photo spread in the middle that featured Cates and under it was written, "Osyp's wife".

After the coin flip Neil elected to go first. Osyp was grinning and clearly had something up his sleeve. Once Neil had cut his deck and dealt seven facedown cards for his hand Osyp announced, "I want to turn around the mat."

Neil rolled his eyes, "They don't actually do that anymore-". When a judge cut him off and said that it was Osyp's prerogative to turn the mat, Neil tried to hush him but he was forced to turn the mat. 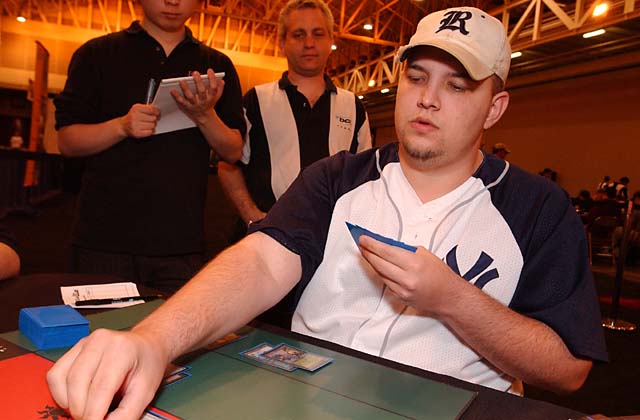 While Neil seemed content with his opening hand, Osyp shipped his back for a new set of six that he kept. Neil was still griping about his deck. He was relaying the story of a match against a Goblin deck where he got his "nut-high" draw-a few lands, Chrome Mox, two Fire/Ice, Scepter and an Oath. On turn two his opponent played Seething Song and cast Goblin Recruiter to stack his deck, Skirk Prospector and then sacrificed both Goblins to cast Goblin Charbelcher.

Neil's draw was looking very good for game one of this match as he played a turn two Isochron Scepter imprinting Naturalize to follow up Osyp's turn one key. Osyp did not play either of his artifact lands for fear of the Scepter and Neil destroyed the Key at the end of the turn. Neil was missing his fourth land drop and hoped to remedy that with another Scepter-this time imprinting Fire/Ice.

One of the reasons that CMU-TOGIT settled on the deck that they did was because of the power of Chalice of the Void. They found many of their other deck choices had no answer to a Chalice set to two and assumed that nether would many of the other teams. With his opponent nearly tapped out and unable to respond Osyp played a land and cast Grim Monolith and tapped it to power out a Chalice of the Void for two-rendering both of Neil's Scepters impotent. Neil checked with a judge to be sure-he could activate the Scepters but the spells would be countered.

Neil was still hung up on three lands and got in for three with his Treetop Village. Osyp played his other Seat of the Synod and Tinkered his Monolith into a Gilded Lotus and followed it with a Tanglewire. Neil was unable to anything two different ways now while Osyp was able to Stroke himself for three cards.

Neil was finally able to get in for three with Treetop Village but that plan was going to work for the long game. Osyp cast an Upheaval and replayed a Monolith and used it to cast a Metalworker. That Metalworker tapped for fourteen mana and played a Phyrexian Colossus, a Gilded Lotus and the return of the Chalice for two.

A turn later he was able to still tap the metal Worker for eight and played a Masticore and a Tanglewire. Neil scooped.

One of the techiest cards in the sideboard of the Scepter-Oath deck is Illusion/Reality. Because the Illusion half of the card only costs one it can be imprinted on a Scepter and either half can be cast-including the three casting cost, artifact shattering Reality. He ultimately decided to leave it in his sideboard where it could be retrieved with a Cunning Wish when needed.

Neil took one form his Shivan Reef on the first turn to Brainstorm. Osyp played an Ancient Tomb but had no play. Neil imprinted his Oath of Druids on a Mox and played Treetop Village and Iced Osyp's land during his upkeep. Osyp played a Port and passed the turn. 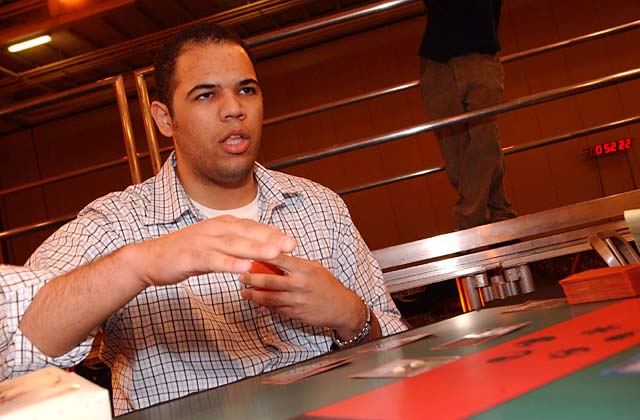 At the end of Osyp's next turn Neil had the Fact or Fiction. The buffet he gave Osyp to choose from was two Counterspell, Cunning Wish, Fire/Ice, and Mana Leak. Neil was impressed with his pull, "That is above average. Don't get me wrong…it is not the stone-you-know-whats but definitely above average." Osyp eventually split the cards Cunning Wish or everything else and Neil took the latter.

Neil played a Forest but did nothing on his turn except for a Brainstorm. When Osyp attacked Neil's blue source during his own turn, Neil floated the blue. Osyp declared his attack step and Neil cast Cunning Wish for Illusion/Reality. "Let me see that," demanded Osyp.

"It is hot-HOT!" declared Neil.

Osyp nodded in agreement and played a Dynamo-"That is also hot…" frowned Neil-and Tangle Wire. Neil put the Tangle Wire on the stack during his turn and tapped out to Shattering Pulse it with buyback. Osyp asked how many cards Neil was gripping. "Seven-full mitt!"

Osyp thought out his turn and cast a Grim Monolith and a Chalice of the Void for two. Even though Neil could destroy it with Illusion/Reality he could not play a Scepter to imprint it on. Neil passed his next turn after laying a Village. Osyp went to fourteen when he tapped his Ancient Tomb to cast a Thran Dynamo and then cast Metalworker. Osyp waited for responses but Neil just looked at his hand, "Yup, those all cost two." He did use the Reality on the Chalice EOT.

When Osyp Ported one of Neil's blue sources EOT, Neil took the opportunity to tap out and Shattering Pulse the Metalworker with buyback. Osyp Tinkered his Tanglewire for a Gilded Lotus and cast Upheaval floating three colorless mana. "The color is irrelevant," explained Osyp.

"I am not nearly as explosive as you think."

When Osyp laid a Seat of the Synod post-Upheaval and Neil teased him, "You are not supposed to play that one first-didn't you read the manual? You need to get more play tips from Eugene." The Dynamo and a Metalworker landed on Osyp's board.

"That was hot! My response will be nearly as hot." Neil played a Shivan Reef and a Chrome Mox and Fired the Metalworker. When Osyp took a while debating his next move Neil implied that he knew what Osyp's play should be, "C'mon Lobodovitch, it is not hard. You won a Pro Tour, right? Do you want me to help you?" Eventually Osyp replayed his Gilded Lotus and cast Tanglewire.

Neil Shattering Pulsed the artifact without buyback on his upkeep and played a Yavimaya Coast. Osyp untapped and played a Mindslaver and activated it. When he took Neil's turn he saw two Counterspell, Forbid, a pair of Coasts and a Scepter. Neil's draw added another Scepter into he mix. Neil offered a suggestion, "Imprint Counterspell on Scepter, go?" To his surprise, Osyp did just that with both Scepters-he even played a land for Neil. Neil saw what was coming and sighed, "I thought Scepter was a hot rip-ripped that one right off the tizzy."

He untapped and Upheavaled, floating four mana and played a Dynamo. Osyp followed his turn with a Rishadan Port and kept Neil from playing one of the two Scepters in hand. He replayed the Gilded Lotus on the next turn and gave Neil a window to cast something but he had nothing but a Chrome Mox, "Would you please kill me, Lobodovitch!"

Osyp played a second Port and when he used them both on his next turn Neil had a response, "A Teferi's Response-I'll draw two! I just gush-a-ranged you. Sick!" Osyp Tinkered his Seat of the Synod into a Myr Incubator and passed the turn unable to activate it. Neil cast Fact or Fiction to find an answer and Osyp offered him Naturalize or four cards and Neil dropped a Coast onto the table and tossed the Naturalize at the Incubator.

Osyp played a City of Traitors and cast Stroke of Genius for seven cards. When he was done Neil seemed annoyed, "You don't draw very well. Sure you got another Stroke of Genius but two Voltaic Keys and a Chain of Vapor, c'mon."

Osyp was stunned. Neil had just rattled off the relevant contents of the cards he had just drawn. "You saw?"

"Every single one of them. You sir, are the nut low. Didn't you win a Pro Tour?"

It was not relevant as the time on the match was eroding quickly and Neil had no win condition in sight. The game ended without a conclusion.

After the match, Osyp explained how he was revealing cards to Neil. He demonstrated his normal method of drawing, which involves sliding the card off of his deck and picking it up parallel to his body. He was pulling cards off the deck and passing them over the play area perpendicular to his body giving Neil a free show. "Normally I pull the cards off of my deck but sometimes when stuff is on the stack-"

Neil cut him off, "-the whole match!"

"I saw every card! The guy I played at States did that Osyp. You won a Pro Tour!"

"Thanks for telling me man." Osyp was shaking his head in disbelief. "That's why I hate playing poker players. I feel like they get inside my head. I thought I was doing so well and not giving anything away."

"You didn't give anything away-except for every single card you drew!"