This is where you want to be at the start of the Day two: undefeated and playing at table one. Feature Matches are nothing new to these two of have known their own share of the spotlight. 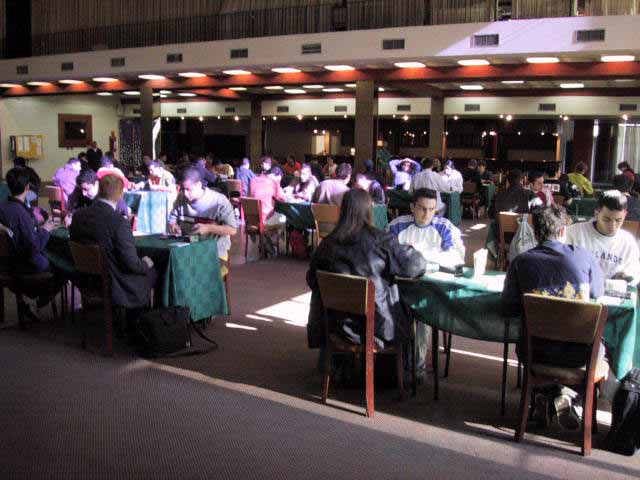 Everyone was eager to start the second day.The day didn't start well for Ruel, who had to take a mulligan. The American came out with a crucial play: Merfolk Looter. Antoine had no immediate way to deal with it so he played Nightscape Familiar.

The Merfolk promptly went to work, chewing away OMS's deck, before being joined by Wild Mongrel. Looking for answers the French tried Fact or Fiction but Steve had Circular Logic.

Repulse took the annoying Looter out of the table and OMS decided to play Squirrel Nest instead. Just as expected Antoine had the counter waiting and decided to spend it. On the next turn OMS tried another Squirrel Nest and they got into a counter war over Antoine's response Fact or Fiction. Eventually it resolved.

Ruel took the two spells and played a second Fact or Fiction.

This time he kept the first pile. The Repulse immediately took away the Mongrel and OMS took the chance to play, and flashback Deep Analysis. The French played a second Familiar and had Counterspell to stop a dangerous Phantom Centaur.

On the ground things were boiling down to Antoine attacking with two Familiars and having one blocked by the stream of squirrels from the Nest. To completely clear th path the Frenchman played Pernicious Deed.

With the Deed announcing impeding doom they both jockeyed for the perfect position to recover from it. OMS played Wild Mongrel to stop the second Familiar and used a second Deep Analysis to refill his hand.

To do the same Antoine used Cunning Wish to fish out Opportunity. OMS played Merfolk Looter - tapping out his only Blue mana source - and Ruel decided it was a good time to clean the table.

Yet, he didn't do it with Pernicious Deed. Instead he went for the most broken combo in Standard in the last few months: Upheaval with enough mana floating to cast Psychatog. Steve's gamble hadn't paid off and he was forced to concede.

Antoine: "That Opportunity was very good. I got the Psychatog and Upheaval."
Steve: "I needed more land. I only had one Blue source." 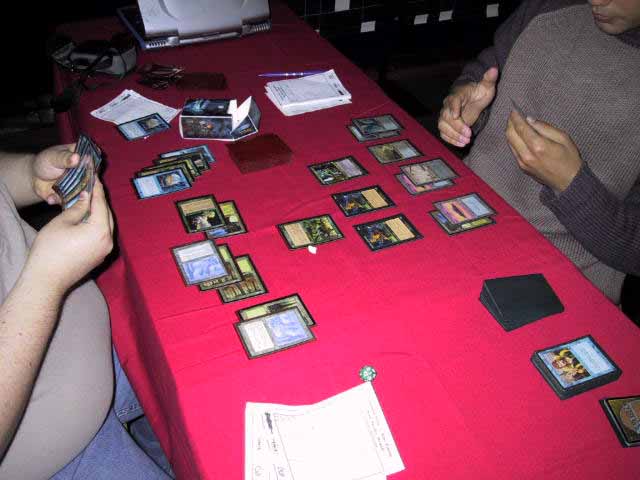 Steve OMS and Antoine Ruel fighting...Again Antoine Ruel had to take a mulligan. They both came back playing as fast as possible, trying to make sure they would have enough to play a third game if needed. OMS again played Merfolk Looter on turn two.

They played "Draw-Go" for a while until Steve tried Squirrel Nest. Antoine let it resolve but tried to bounce the Looter. The American was ready with Circular Logic tapping out.

Deed right now would have been very good but Ruel didn't have it. So he tried to find it with a main phase Fact or Fiction.

The Frenchman took the Deed. Repulse tried to take away Looter and OMS had a sickening answer for it: Seedtime. This gave him an extra turn to swing with squirrels and play Phantom Centaur.

Antoine smiled and shook his head. He tried Pernicious Deed and was probably surprised to see it resolve. He took one more hit down to eight and blew the Deed. OMS tried another Centaur, Antoine countered but OMS had another Seedtime.

On the extra turn another Centaur showed up, much to Antoine's despair. He tried Upheaval on the last possible turn and two Gainsays later it resolved. Still that Gainsay had cost him the extra mana.

Steve restarted with Birds of Paradise, Wild Mongrel and Llanowar Elves while Antoine played Nightscape Familiar. Antoine surveyed the table and decided he would rather concede than try to drag on a game he had little or chance of winning.

Antoine: "Deck, no mulligan this time!"

They shuffled up in a hurry with fifteen minutes still on the clock. Although for some match-ups that is more than enough to play a whole match these two decks like to take their time.

Ruel got his wish and didn't need to mulligan. Steve came out with two Birds that gave him enough mana advantage to try a turn three Squirrel Nest with Seedtime back up. Still his extra turn didn't yield any advantage despite the pounding his deck took.

Eventually he got a Wild Mongrel on the table and Antoine looked for extra cards with Fact or Fiction.

The Deed entered play on the following turn, along with Nightscape Familiar. This enabled Ruel to stall the game forcing OMS to play more threats before the Deed would clean the table. The American did trigger the Deed a few turns later with Merfolk Looter.

After the table was reduced to lands and Familiar OMS tried Nest and Antoine answered with another Fact or Fiction.

The Frenchman took the bigger pile. He let the Nest resolved and played a second Familiar before dropping ANOTHER Fact or Fiction. This gave him an impressive hand.

Steve OMS tried to fight back with Looter but Antoine was more than eager to Ghastly Demise it. Eventually he went for the Upheaval keeping five mana back. OMS kept two mana as well.

Ruel played Psychatog and showed OMS he had Ghastly Demise for any chump blocker the American could play.