Besides Craig Wescoe (who was paired down), these are the only 7-0 players in the tournament, and they are potentially playing to be the last 8-0 player. Both players are locals who haven't had much exposure in other Magic arenas. Dale Taylor is playing a Red/Green/Black deck and Ken Bearl is playing the No-Mar deck that has quite a few representatives at the top tables. 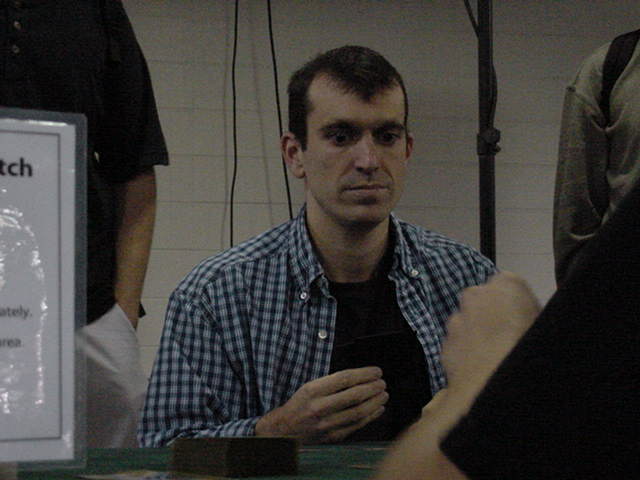 Dale won the roll and decided to play first, having to mulligan away his first hand. Ken made the first move of the game by casting Gerrard's Verdict, causing Dale to discard a Void and Thunderscape Battlemage. Ken began the creature war with a Phyrexian Rager, but it was made the target of an Urza's Rage after Dale's Destructive Flow cut off Ken's last source of black mana. Over the next few turns, Ken cast two Fact or Fictions which not only fetched the basic lands needed to get out of the nonbasic lock but also the threats to coincide. One of those cards, a Vindicate, destroyed Dale's only source of green mana and locked him at two mana, both swamps.

Soon after, Ken put a Yawgmoth's Agenda into play and, at eight mana, immediately began to abuse it. Dale's previous board position was fairly bad, but after adding the Agenda, he had no chance to survive. Six turns later, Ken found a Desolation Angel to officially end the game. Besides one Urza's Rage, Dale was only able to cast one other spell the entire game, a Destructive Flow, which he played five times because of two of Ken's Recoils that saw double use because of his Agenda. 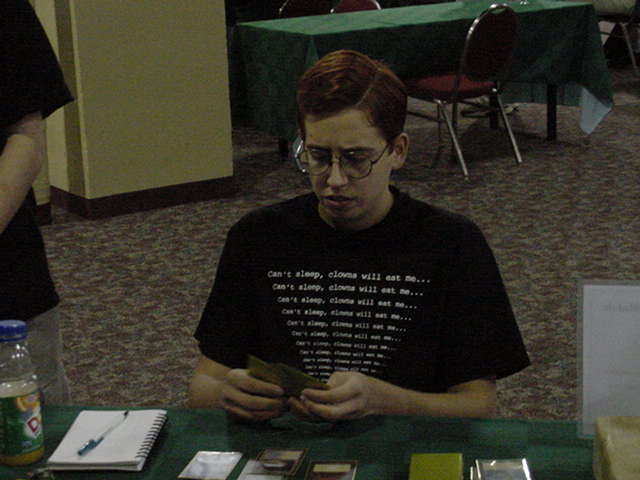 Dale once again started this game and led with a Lay of the Land on turn one, and two Chromatic Spheres on turn two, one cycling into the other. On the third turn, Dale dropped a Destructive Flow with his opponent at one Plains and a Coastal Tower; Ken, however, had the Aura Blast and just took advantage of Dale's hate. Ken responded by dropping a fifth turn Spectral Lynx, leaving him unable to counter Dale's Thunderscape Battlemage with black kicker (his fifth land drop was a tapland). The next turn, Ken used his only black source to cast a Phyrexian Rager, prompting Dale to blow his Pernicious Deed before more black mana could come down to regenerate the Lynx.

Dale followed with an Addle revealing double Vindicate, double Dromar's Charm, Desolation Angel, and Spectral Lynx; he chose Desolation Angel and repeated the mantra he had been chanting throughout the match: "I can't beat this deck."

Dale tried to start pressuring Ken with a Jade Leech, but Ken simply Vindicated it and continued his reign of card advantage through a bombardment of Fact or Fictions and Phyrexian Ragers. Dale fought on with a pair of hard-cast Dodecapods, a pair of Spiritmongers, and a Goblin Trenches, but Ken was able to deal with each threat at his own pace. A Yawgmoth's Agenda later, the game was practically over. Dale tried to stop the overflow of answers by using Pernicious Deed for five to kill the Agenda, but Ken simply Recoiled it and cast it again. 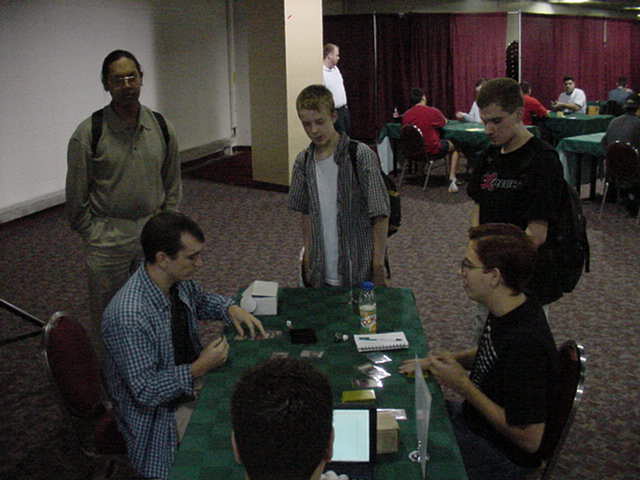 By the time the Agenda resolved again, the tables had turned. In the window that the Agenda had left play, Dale was able to resolve a black kicked Thunderscape Battlemage, a Spiritmonger, and a Pyre Zombie. Still, Ken effectively had a 30 card hand with his Agenda. Between multiple Recoils, Vindicates, Fact or Fictions, and Dromar's Charms, Dale didn't have much time to finish taking advantage of his short-term creature advantage. Three turns after the Agenda, Ken Addled, pulling out the Terminate and revealing a Swamp. When Dale cast Lay of the Land on the following turn, Ken knew the way was clear for his Desolation Angel which ended the game in less than a minute.

In other news, Craig Wescoe drew with Seth Burn, leaving Ken Bearl as the only remaining undefeated player in Grand Prix: Minneapolis at 8-0.