Two of Australia’s nicest magic players are squaring off in the round eight feature. Hailing from Sydney Corney has always been excellent in the constructed formats, combining extensive playtesting with a intricate knowledge of the cards in the set to tweak and create decks of the highest standard. Brugman is from Melbourne, where magic is currently at its fiercest but has been doing a lot of testing online thanks to the recent birth of his child. 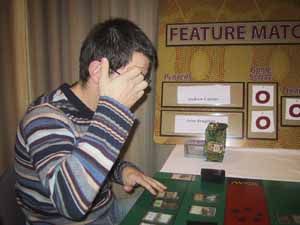 Corney leads off with a turn one Tireless Tribe, not to be outdone Brugman has a turn one play of his own, Bird of Paradise. Keepin the beats flowin, Corney summons a Sunstrike Legionnaire and hands back over to Brugman. Brugman has no play and takes 2 more points of beats as the little guys come charging in. At the end of the turn Burgman Smothers the Tireless Tribe and in response Corney Madnesses out an Arrogant Wurm. Chainer’s Edict forces Corney to sacrifice the little Legionnaire and the Arrogant Wurm comes charging in, dealing 4 points, with Corney continuing to add to his team with Benevolent Bodyguard and a morph creature.

Ravenous Baloth comes into play for Brugman leaving him three cards in hand. Corney sends with the Arrogant Wurm and the morph, flipping it over before blockers to reveal an Exalted Angel. The Baloth blocks the Arrogant Wurm and the Bodyguard keeps the Wurm alive, sacrificing itself for the good of the team. Brugman summons another Baloth and casts a Living Wish, grabbing Visara, the Dreadful from his sideboard. Corney sends in the Angel all on its lonesome and drops a Tireless Tribe and an Anurid Brushhopper hoping to overwhelm Brugman with sheer weight of numbers.

Brugman taps his 6 mana and brings down Visara, the Dreadful threatening to put an end to the game unless Corney can do something and fast. Corney turns his whole team sideways with Visara blocking the Angel, Arrogant Wurm and the Baloth trading and the Bird chumped off against the Brushhopper. “Oh the Gasman!” exclaims Brugman as he taps himself out after his draw phase to summon a Krosan Tusker.

Corney thinks for a while and simply plays out a Wild Mongrel, passing the turn back but Brugman has a play before the end of turn shooting down Brushhopper with Visara during the end step. Brugman then taps himself out once again to cast a flashed back Chainer’s Edict, and the turn after casts another Chainers Edict. When Corney tries to phase out his Brushhopper it gets shot by Visara in response, leaving Corney with no hand, no creatures and staring down a Visara and a Krosan Tusker. Two turns later the two are shuffling up for the next game.

Corney once again starts quickly with a Tireless Tribe but this time his first land is a Brushland, dealing him a damage. Brugman had no turn one bird this time and was facing down a turn two Compost. Unphased, Brugman decided to play an edict anyway, knocking the Tribe off the board. Sacrificing off a Windswept Heath Corney brought a Brushhopper into play and Brugman had a less than optimal answer in Withered Wretch.

Corney dropped down a Nantuko Monastery and the Brushhopper attacked for 3, with the Wretch removing the Tireless Tribe at the end of the turn. Phantom Centaur from Brugman threatened to tie up the board and Corney phased out his Brushhopper and Madnessed in an Arrogant Wurm. He then untapped and cast Reprisal on the Centaur and sent in his team, summoning a Wild Mongrel after combat. Brugman once again tried to slow things down casting Ravenous Baloth. 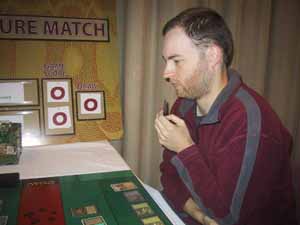 Corney came crashing into the red zone with all three creatures, and Wretch blocked the Mongrel and Baloth blocked the Brushhopper. With only two cards in hand Corney faced a dilemma, phase out the hopper or keep the Mongrel alive. He decided to keep the Mongrel pitching and Madnessing an Arrogant Wurm into play and drawing a card from Compost as the Wretch hit the graveyard.

On a precarious four life brugman dropped down a Phantom Centaur and Living Wished for his Visara, leaving his team back, bracing for the incoming beats. Drawing a card, Corney pitched three cards to the Mongrel gaining threshold and allowing him to attack with a 5/5 Mongrel, the Wurms and the Activated Monestry, dealing lethal damage.

In the deciding game Brugman finally gots to go first, but its Corney who had the first play, with a turn two Compost and a turn three Wild Mongrel. Brugman takes the chance to cycle away his Tusker at the end of Corney’s turn, netting him a swamp. He makes a big move on turn four smothering the Mongrel and Wishing for Visara, and then follows it up with a turn five Genesis. Corney sacrifices his Windswept Heath to gain a Forest and then casts Reprisal on the Genesis.

Wild Mongrel crashes in and pumps for one bringing out a madnessed Arrogant Wurm. Once again Corney has the Reprisal taking the Visara to the graveyard and drawing a card, slamming in with his two creatures and summoning a Brushhopper. Brugman elects not to return his Visara with the Genesis in the yard and summons a Baloth and a Wretch. Corney pitches Glory to the Mongrel giving it a boost and then uses the Glory to make his men protection from green, and sends in his team. Brugman elects not to block and Corney pumps the Mongrel once forcing Brugman to sacrifice his Baloth.

Brugman once again elects not to return anything from his graveyard and plays out another Baloth, using the Wretch to remove the Glory from the graveyard. Corney has his third Reprisal of the game and removes the Baloth, he then makes short work of the already half dead Brugman with a second Glory.