Tim and Gary were seated next to each other during the Rochester Draft. Krakower fed Tim the best R-G deck at the table while taking B-U. The packs were very unfriendly to Krakower as he opened seemingly nothing and was passed even less despite cooperation during the draft. 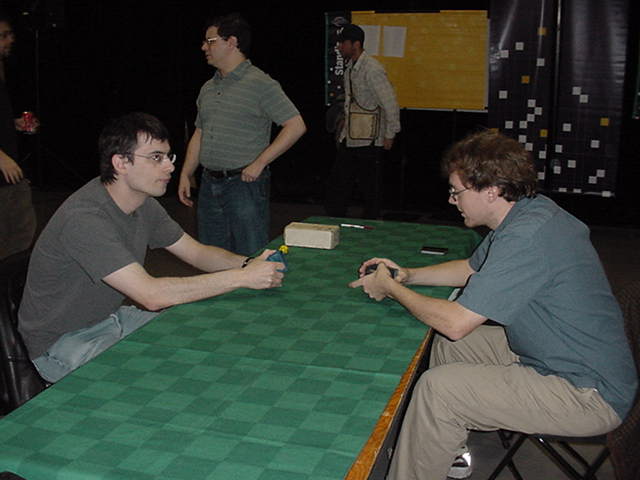 Gary starts the game playing and takes a mulligan. He starts out with a turn two Filthy Cur and McKenna answers it with a Wild Mongrel. The Cur attacks and McKenna blocks. He tries to pump the Mongrel before damage is stacked, and the greedy of the extra damage cost him a card as Krakower used one of his four Aether Bursts on the Mongrel. McKenna Reckless Charges his newly play Mongrel and attacks for five. Krakower plays a Phantom Whelp and says go. He has missed his fourth land drop and is visibly unhappy about how the game is turning. McKenna sent with the Mongrel on his fourth turn, which Krakower double blocked. McKenna Blazing Salvoed the Cur effectively dealing five to Krakower. McKenna traded the creatures and played out a Werebear. Krakower passes the turn as he may have Aether Burst to slow McKenna. McKenna played out a second Wild Mongrel and an Ember Beast. Krakower passed his turn again without playing a creature. McKenna attacked and played another creature on his turn. The game was over, as Krakower deck couldn't recover from such position. 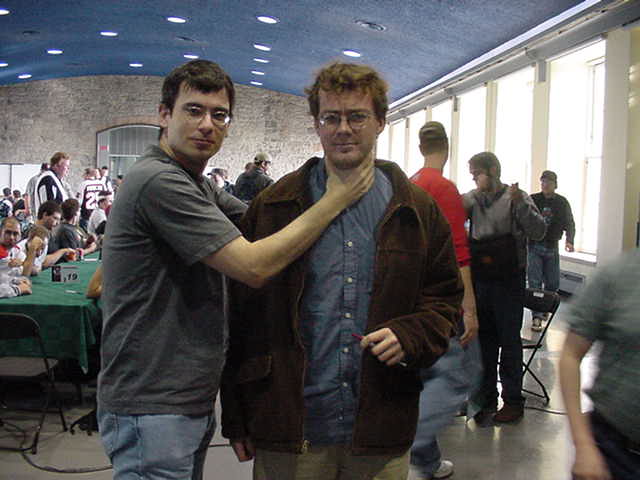 Gary didn't sideboard for game two as Tim brought in a second Reckless Charge and an Epicenter over Demoralize and Rites of Initiation. Gary led with the Filthy Cur once again. McKenna's board was two Squirrel tokens and an Ember Beast on turn three. Gary again missed a land drop on turn four and five. With little board position and no real answers to most of McKenna's deck Krakower stalled with a couple Aether Bursts and was eventually overwhelmed by better and larger creatures. Toward the endgame a Chainflinger made the game near impossible to win for Gary.