At 8-1-1, both of these players need to win at least two of the remaining three rounds in order to advance into the top 8. Dave Humpherys brought a Blue-White-Black variant to the table. He is ready for the mirror match - there are Dodecapods maindeck. His opponent Cassius Weathersby is playing an interesting Black-Red-White variant.

Humpherys won the die roll and summoned a Spectral Lynx on turn two. Weathersby matched with a Shivan Zombie, its protection from white ability able to hold off the regenerator. Humpherys summoned another Lynx. His opponent chose to trade two damage for four, and attacked with the Shivan Zombie, then used Vindicate to destroy Caves of Koilos rather than one of the Boston player's creatures. Humpherys happily attacked, played another Caves of Koilos, and summoned a Phyrexian Rager.

Flametongue Kavu took out the Rager. Humpherys was more than willing to race. He cast Gerrard's Verdict, gaining three life as one of the cards discarded by his opponent was a land, and summoned a third Lynx. With no mana untapped, the Lynx traded in combat for Flametongue Kavu on the following turn. Weathersby cast his own Verdict only to run into Humpherys's secret weapon - the maindeck Dodecapod! A 5/5 creature entered play, tipping the balance of the game further in Your Move Games member's favor. Weathersby' s Phyrexian Rager lived only long enough to chump-block Dodecapod, and his Blazing Specter was removed via Dromar's Charm.

Despite having to mulligan in the second game, Weathersby was off to a good start. He summoned a turn two Spectral Lynx, Vindicated Humpherys's Coastal Tower on turn three, and Terminated his Lynx on turn 4. Humpherys failed to play a fourth land, stuck at two mana with no sources of blue in play. Eager to take advantage, Weathersby played Goblin Trenches, but chose not to sacrifice his lands for now. Still manahosed, Humpherys cast a Phyrexian Rager and announced his intention to discard down to seven. Not well familiar with the rules, Weathersby allowed him to discard a card, then tried to played effects. Effectively, Humpherys Time Walked his opponent, because he did not know that no spells or abilities could be played after a player discards a card. 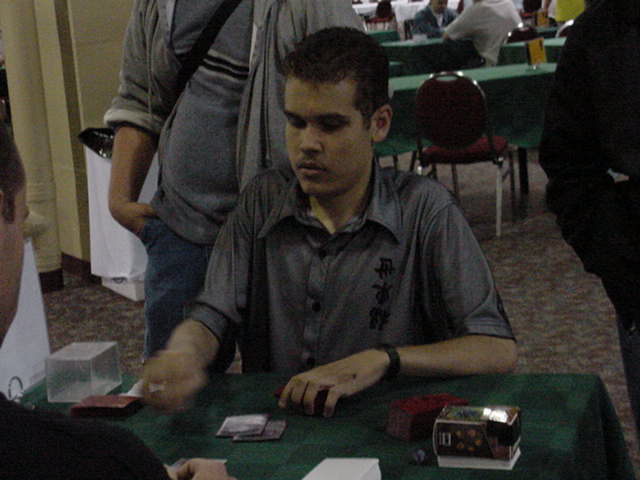 The temporary respite may have been enough to let Humpherys recover. He cast Hobble on Spectral Lynx the next turn, but still failed to draw a land. This time around, Weathersby did not forgo playing spells during the end of Humpherys turn - he Terminated the Rager and made two Goblin Soldier tokens. An attack brought Humpherys down to six life points. Weathersby went on to summon a Flametongue Kavu, destroying the Hobbled Lynx. Humpherys played another land and tapped out to summon Dodecapod. Weathersby drew Urza's Rage off the top of his deck, used it to get rid of the 3/3 artifact, and attacked for the remaining six points of damage, sending the match into the deciding third game with eighteen minutes left on the clock.

Another mulligan in the third game did not work out quite as well for Weathersby. He did draw lands, but did not have a source of white, unable to play a creature on turn two. Humpherys tried for some payback, Vindicating Weathersby' s Urborg Volcano - but it was not as effective, Weathersby had more sources of black and red mana in his hand. As a matter of fact, Weathersby discarded another land to Gerrard's Verdict. With Weathersby still behind on mana, Humpherys summoned a 4/5 Emblazoned Golem

With only six minutes remaining in the match, Weathersby did not have a very good chance at a win, but he could possibly pull out a draw. He got Goblin Trenches to resolve and could potentially make enough creatures to block Emblazoned Golem until time ran out. With a very lucky draw, he could even try for a win - though it wasn't too likely. 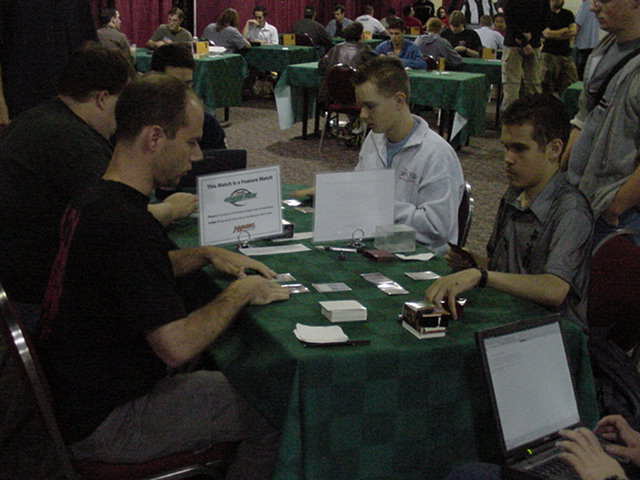 Things really began looking up for Weathersby as he resolved Terminate while Humpherys was drawing more and more lands. Humpherys really needed to draw his Desolation Angel, else he was not likely at all to win this match. The deck betrayed Humpherys this round though - it yielded a Spectral Lynx and several more lands, to the point where he was fighting not to lose the match, rather than playing to win it.

A turn before he would die to the horde of Goblin Trenches tokens, Humpherys drew Hobble. He used it on Emblazoned Golem, drawing Phyrexian Rager. He summoned the Rager, but failed to draw Rout he desperately needed here. At the end of Humpherys's turn, time was called. During the next attack step Humpherys revealed the card he drew off the Rager - Dromar's Charm. He gained enough life to survive another turn.

Humpherys drew and cast yet another Rager next turn, going down two life. It yielded nothing but another Swamp though, allowing Weathersby to pull out a win he did not really hope for only ten minutes earlier.