Brian Hegstad, of Team AlphaBetaUnlimited.com, came into this round 9-1 with a red/green beatdown deck splashing blue for Prophetic Bolt. Lee Curtis is a Nebraskan at 9-0-1 playing Liquid Tempo. 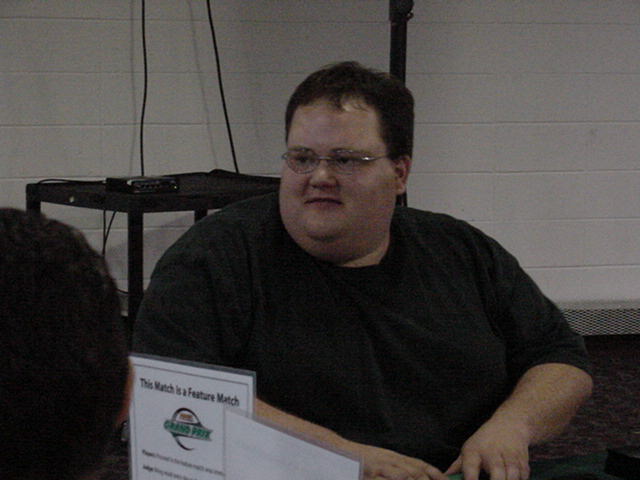 Lee won the die roll and elected to play first. Before the game started, Brian paris mulliganed to a six-card hand. Lee started off with a Blurred Mongoose and cast Urza's Rage on Brian's turn two drop, a Kavu Titan. The race began as Lee sent in his Mongoose only to be upped one by a Raging Kavu from Brian. Brian then dropped his Keldon Necropolis which, according to him, was the first time in the entire Grand Prix that he had drawn it. Lee cast another Rage on the Raging Kavu, and kept swinging with his Mongoose. Brian tried to keep in the lead of the damage race by dropping resolving two Raging Kavus, but a Rushing River with kicker shortened both of their stays in the red zone. By this time, Lee had added a Gaea's Skyfolk to his bearline and was trying to run away with the game.

Brian, with many more cards in hand, was able to burn away the airbear and meet Lee's Mongoose with one of his own. Lee's tempo faded to nothing with Brian at eight life. Without any creatures of his own, Lee could only watch as Brian continued to pour down a steady stream of threats. By the time that Lee had stopped drawing land and managed to get some creature on the table, it was of little relevance as Brian simply tapped seven and burned Lee out of the game with a Ghitu Fire. 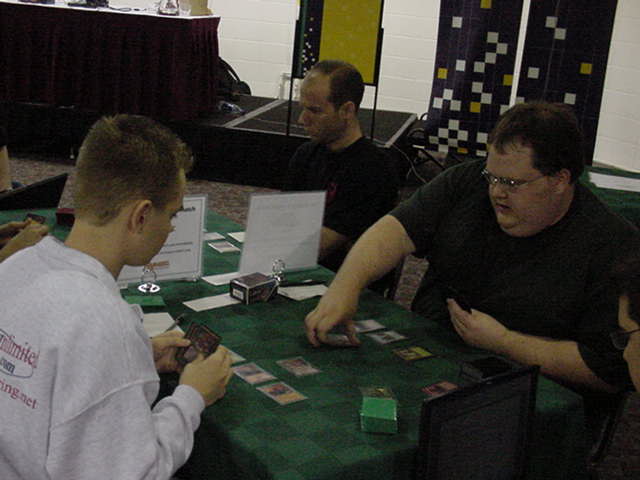 This game started uneventfully as two of Lee's Blurred Mongeese traded with a Kavu Titan and a Raging Kavu from Brian. Brian missed his fourth land drop, allowing Lee to drop a kicked Kavu Titan. The next turn, Brian peeled another green mana source, bringing him up to two and allowing him to drop a Jade Leech. The Kavu Titan and Jade Leech traded in combat, and Lee cast another kicked Kavu Titan. This time, Brian pulled a Yavimaya Coast allowing him to kick up his own Kavu Titan which would trade with Lee's own.

Brian's next creature, a Blurred Mongoose, started swinging as all Lee had was two Mystic Snakes and an Urza's Rage. Lee's deck didn't let him down, however, as a Blurred Mongoose showed up to trade. Brian decided that he had to start casting spells again and attempted to use a Prophetic Bolt at the end of Lee's turn. A Mystic Snake countered the Bolt but opened the way for a Skizzik with kicker. During the next combat, Lee lost both his men when he tried to gang-block the Skizzik only to see one of them vaporized by a Fire. Lee was reduced to seven from the six he received in combat in conjunction with the damage Brian had taken from his blue painlands throughout the game. Lee was unable to stop the Skizzik and the Blurred Mongoose from killing him, much less deal with the Ghitu Fire in Brian's hand.