Feature Match Round Five: Will Copeman vs David Robertson

Robertson cycles Mages Guile on turn one and then plays out his first creature, a morph on turn 3. Copeman makes no play on his first three turns and it becomes apparent why when on turn four he summons a Daru Stinger and flashes 3 creatures for it. Robertson keeps dropping creatures powering along with a Keeneye Aven. The Aven comes in on its own before the Stinger can become active and Robertson plays another morph and an Imagecrafter. Crown of Awe on the Stinger removes any ideas that Robertson might have about red removal, and Copeman drops a Catapult Squad and a Deftblade Elite. 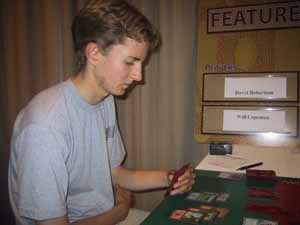 Lavamancers Skill comes down on the Imagecrafter and Robertson passes the turn back. Deftbalde Elite and Catapult squad come in for an attack and the Skilled Imagecrafter shoots down the Elite, with Catapult squad getting through unblocked. Copeman plays down Tribal Golem, with its ability making it 4/4 first strike, and ends his turn. Robertson plays a Glintwing Invoker and Copeman swings in with with the Golem for 4 points of damage.

At the end of the turn the skilled Imagecrafter deals two points of damage to the Catapult Squad. Robertson simply draws and passes the turn back to Copeman who attacks with the Golem again. At the end of the turn a Charging Slateback is unmorphed and Choking Tethers is cycled to tap the Stinger allowing Robertson to send in a large force of men. With Slateback, a morph, Keeneye Aven and the Invoker attacking they combined to deal a hefty 11 points of damage. With nothing to do Copeman sits back on defense but when a Crested Craghorn comes into play and provokes the Tribal Golem, Copeman has no outs and scoops up his cards.

Robertson opened up proceedings on turn 3 with a Mistform Wall. Copeman’s turn four was much more deadly, again casting a Daru Stinger this time revealing 4 creatures, making it a 5/5. Aphetto Grifter joined play on Robertsons side and after turning the Mistform wall into a wizard he tapped down the Stinger, only to have Copeman cast another stinger flashing the same 4 cards again. Covert Operative came into play for Robertson and when Copeman had his Stinger tapped down again he sent in the other one, dealing 5 damage. He then followed up with a Stoic Champion and a Whipcorder. 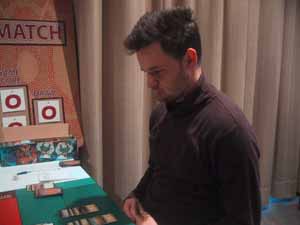 Robertson then summoned an Imagecrafter and dropped an Erratic Explosion onto the head of the Whipcorder removing it from the field of play. Both the stingers were again tapped down in the attack phase and Copeman dropped out a Gustcloak Harrier. Robertson continued to cast creatures with a Primoc Escaper coming into play, sending in the Covert Operative so that he could get through some damage on Copeman. Once again a Stinger was tapped and this time the Gustcloak and the Champion came in, with one Stinger staying at home. Copemen then cast a Daru Cavalier but had nothing to search for giving the turn over to Robertson.

Keeneye Aven came in for Robertson who sent the turn back to Copeman. Once again both of the Stingers were tapped down with 4 wizards and Copeman made a null attack, casting a Grassland Crusader. Robertson attacks with his Keeneye Aven and the Primoc Escapee, dealing 6 points of damage. Robertson decides to only tap down a single Stinger with two of his wizards, leaving the other one open to attack. Copeman casts Piety Charm, chosing the ability that attacking does not cause creatures to tap. Imagecrafter is forced to chump block Grassland Crusader, and the Mistform Wall blocks the Stinger, with damage on the stack Robertson taps them both to tap down the attacking Stinger. Robertsons draw phase yields nothing and he is forced to concede.

Robertson leads off the deciding game with a mulligan, thankfully his second hand is okay and he plays down a moprh on turn three, with Copeman matching it on his own turn 3. He declines to trade when it comes into the red zone and Robertson brings out a Mistform Wall. Copeman casts a Whipcorder and passes the turn back to Robertson. When he attacks with his morph Copeman decides that this time he will block, and loses his morph when Charging Slateback turns over. Copeman casts an Aven Redeemer and passes the turn with Robertson attacking with Slateback and summoning a Covert Operative.

Copeman plays out another morph and passes the turn leaving one mana open to operate his Whipcorder. The Operative gets through when the Slateback is tapped and Copeman prevents 2 damage to himself with the Redeemer. It then flys off to the graveyard when it gets hit by an Erratic Explosion. Robertson plays down an Imagecrafter and passes the turn back to Copeman. Covert Operative is slapped down with a Pacifism and he straps a Lavamancers Skill to his morph creature. Imagecrafter gets shot down by the Skill and Copeman plays out a Gustcloak Harrier. Crown of Fire on the Mistform Wall allows Robertson to slide through some damage, as the Whipcorder once again taps down the Slateback

Daru Sanctifer is flipped over by Copeman and it takes out the Crown of Fury. Macetail Hystradon comes into play and is tapped down by the Whipcorder with the Charging Slateback spending some quality time in the red zone. Copeman pulls a second Mountain off the top and pinpoints the Hystradon, allowing him to once again tap down the Slateback. Copeman drops down a Grassland Crusader but during his endstep his team gets his team gets tapped down by Choking Tethers, allowing Robertson to attack for leathal damage, winning him the game and the match.