This is the round the big names come out and play. Antoine Ruel you all know by now, being a member of Black Ops and one of the game's top performers. People outside of Latin America might not know Ricardo Barros but he is one of the best Brazilian players. 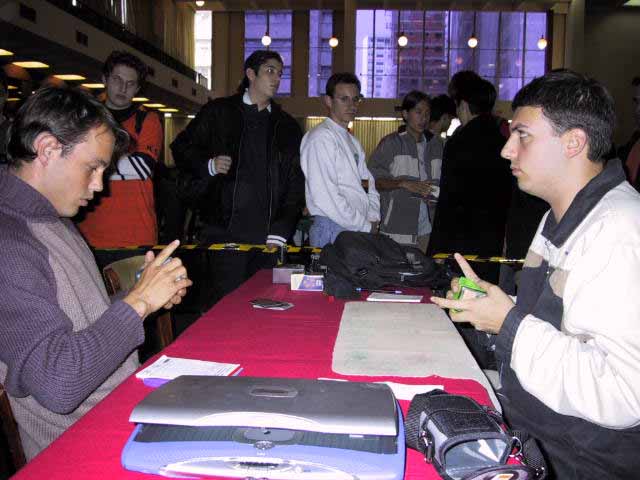 The first Feature Match of the day.Barros started trouble with a first turn Sylvan Safekeeper followed by Patrol Hound. The French finally reacted playing Nightscape Familiar but this gave the Brazilian an opening to play Anurid Brushhopper.

Between the sneaky Brushopper and the Hound Ruel was already down to twelve. With only Blue and Black mana sources Antoine tapped out to play Fact or Fiction.

Ricardo: "I didn't expect to see a Deed."

The French took the second pile. Still riding fast Ricardo discarded Glory to the Hound and tried to give one the Anurid Protection from Black. Antoine answered with Wish for Slay to hit the Brushhopper.

Olle Rade saved the creature and the French took a massive hit down to six. Finally finding a source of Green mana the French calmly played his Deed. When Barros sent in his now four creatures the Deed took out the whole table.

In came another Brushopper and another Deed. On Barros' upkeep the Deed blew up but the Brazilian hid his creature. That monster was more than Ruel could handle. On the last possible turn the French tried to catch his opponent of guard with Repulse but Ricardo Barros remembered the Glory in his graveyard.

With a smile and a shrug Antoine scooped his cards. 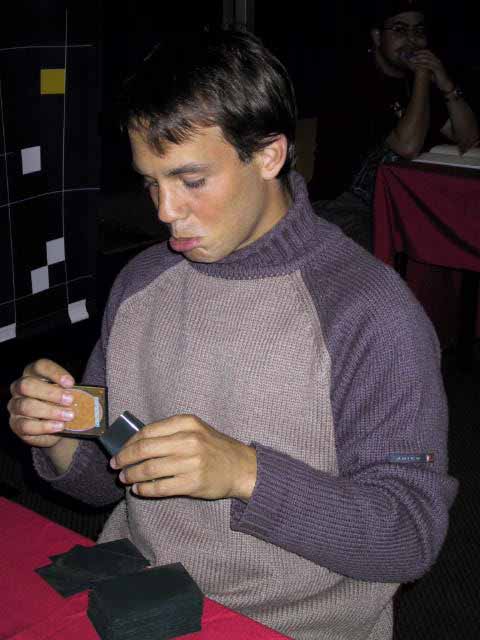 Ruel's face after the first game tells the whole story.Again the Brazilian came out smoking with Basking Rootwalla followed by Wild Mongrel before Antine could even blink. Still the French answered strongly with Psychatog.

On the next turn the Hound and Atog locked horns. A few minutes and several discarded cards later Mongrel died alone. To replace it Barros played Spellbane Centaur.

Ruel played Fact or Fiction and kept two spells over three lands. Still the Psychatog had stalled the ground. With a series of "Draw-Go" turns the game suited Antoine perfectly.

Eventually he found a Pernicious Deed and blew it to leave the Centaur facing the Psychatog alone. A Basking Rootwalla joined the party but at thirteen life the French still had things under control. To get that point across he played Upheaval and replayed his Psychatog.

The big muncher pinged away until he was joined by his twin brother. Ricardo Barros tried to fight back with Spellbane Centaur but eventually it was all Antoine Ruel revealed Fact or Fiction (which would give him enough fuel to finish things). 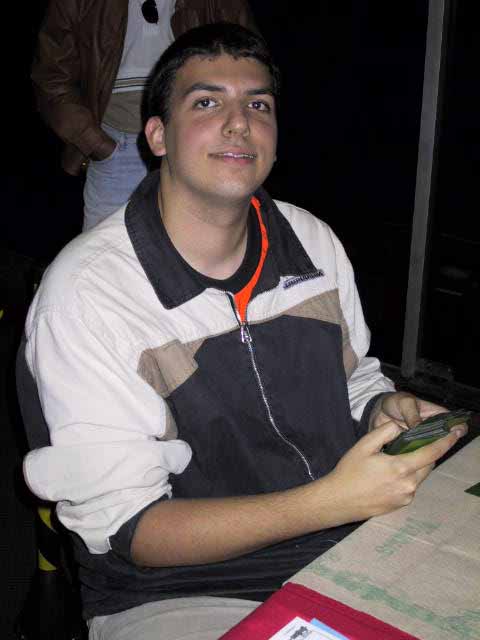 And Ricardo's face tells his side of the story as well.This time the French was ready for Barros' fast start: Force Spike for the second turn Mongrel. On the next turn a second Mongrel resolved and Antoine thought long and hard before tapping out to stop it with Psychatog.

Still, Ricardo didn't even blink: in went the Mongrel. The French soaked the damage and saw his opponent play a cheaper Arrogant Wurm. In need of help Antoine played a main phase Fact or Fiction:

Ruel took the second pile and blocked the Arrogant Wurm on the next turn, removing enough cards to keep the Psychatog alive. To replace it Ricardo had Spellbane Centaur, which fitted in perfectly as a juicy target for Antoine's Slay.

The Mongrel and Psychatog again bumped into each other. A flurry of discards, a Basking Rootwalla and graveyard-eating later the Hound died alone. This finally stopped the Brazilian.

Again locked into "Draw-Go" the game seemed firmly in Antoine Ruel's hands. The Rootwalla turned kamikaze to slow down the Psychatog, but nothing short of a miracle could stop the French now.

He played a second Psychatog, Repulsed a Roar token and played a THIRD Psychatog. Still the Brazilian fought on, and with so many madness creatures he could launch a critical counterattack at any point.

Finally at six he found the perfect answer to the amassing army across the table: Pernicious Deed. Ricardo Barros gave him a big thumbs down and bury all his creatures, expect a Spellbane Centaur.

At six the French kept swinging with two Psychatogs, leaving one back to stop any surprises and the Centaur. A few turns later the trio of Psychatogs was too much for the Brazilian to handle.