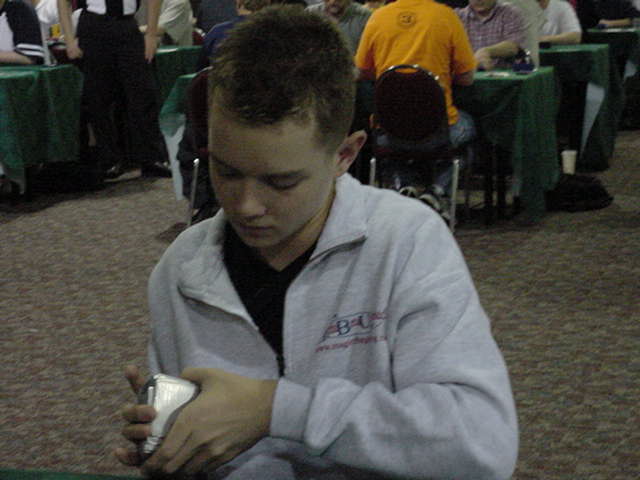 Brian won the flip and opted to play first, leading with a first turn Shivan Oasis. Joel matched this with a Coastal Tower on the other side of the table. By the time Joel made his third land drop, Brian was already beating him senseless with a Raging Kavu and a Blurred Mongoose. Joel made a second Gerrard's Verdict, but had nothing for the creature ambush. Joel missed his fourth land drop, but had a Recoil for the Raging Kavu to slow down the onslaught. On Joel's next turn, a moan from the spectators signaled his inability to draw land; he was able to put an Emblazoned Golem on the board to act as a speed bump, but Brian simply laid a Raging Kavu at the end of the turn followed by a Skizzik without kicker on his turn. The Golem stepped in front of the Raging Kavu, but with Joel now at one life and with only two swamps and a Coastal Tower in play, there was nothing Joel could do about the Blurred Mongoose and conceded. 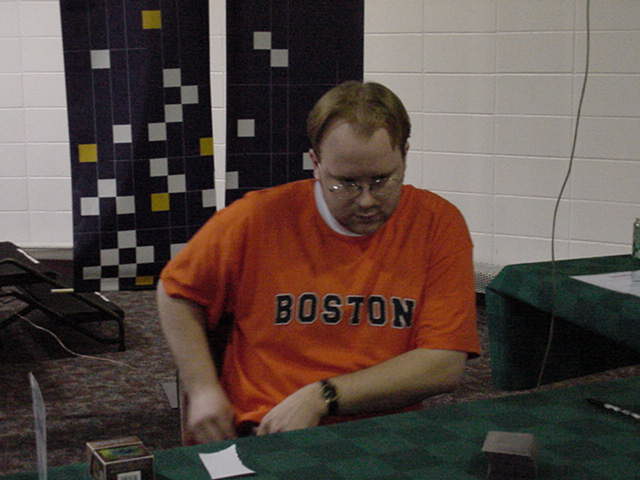 Interestingly enough for this block, this game started without any taplands. In a change of pace, Brian missed his fourth land drop and lacked access to red mana. Joel moated Brian's offense with a Spectral Lynx, which was currently standing guard over a turn two Blurred Mongoose. To compound Brian's problems, Joel used an end step Recoil when he realized that Brian was about to discard. On Joel's next turn, he began attacking with his Spectral Lynx and dropped a second one. All of the sudden, Joel became the aggressive deck while Brian was regrouping from his mana inconsistencies. Joel, on the other hand, was drawing a little bit too much mana, leaving him open to Brian's unkicked Skizzik that evened out the damage race. Another unkicked Skizzik put Joel at a precarious six life, but he casually untapped, sent his two bears to reduce Brian to five, and showed a Death Grasp for the game. 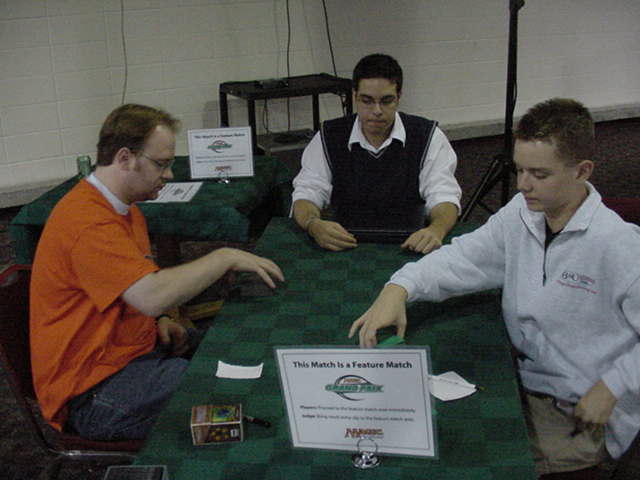 The third game mirrored the first with both players opening with taplands: Shivan Oasis and Coastal Tower. Brian didn't have a second turn drop, but he did have an Ice to lock up Joel's mana on the next turn. While Joel didn't have a direct answer for the Thornscape Familiar that resolved on Brian's next turn, he did have an Addle to proactively remove a threat. Joel didn't see wasn't very happy when a Raging Kavu, a Skizzik, a Prophetic Bolt, a Ghitu Fire, and a land were revealed, but he was even more displeased with Brian topped a Skizzik to replace the Addled one and served for seven on the fourth turn. Joel dropped to six during Brian's next attack phase with the same creatures. Feeling the heat, Joel played a Dromar's Charm for five life during Brian's endstep after nothing was cast in his opponent's main phase. Joel followed up with a topdecked Death Grasp on the Skizzik to try to regain control, but an end step Prophetic Bolt from Brian followed by a Raging Kavu on his turn which sent five more points collectively reduced Joel back to five life. Joel cast Gerrard's Verdict, feature two creatures, and Spectral Lynx on his next turn, but was helpless to stop the Ghitu Fire he knew he had left Brian after the Addle.

2 Urborg Shambler 2 Dodecapod 2 Voice of All