Two natives from Tennessee faced off in this feature match. Craig Wescoe is playing his aggressive blue/white/red design and Doug Hanson is playing liquid tempo. 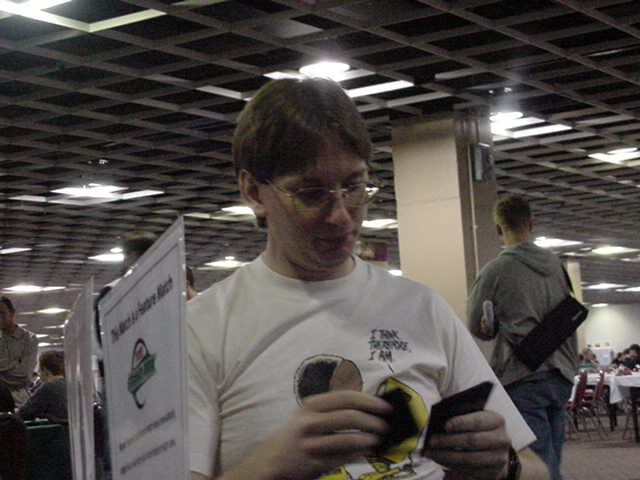 Craig won the die roll and led off with a second turn Galina's Knight. Doug responded with a third turn Gaea's Skyfolk but declined to block, signaling his intentional to play the damage race instead of playing into one of Craig's Repulses. At the end of Doug's next turn, Craig cast Ice on Doug's Shivan Oasis, reducing him to three mana and making him unable to cast Mystic Snake. Craig then took the opportunity to cast Goblin Trenches, one of his primary bombs.

Craig began to generate tokens, but he was still taking damage from a Gaea's Skyfolk; after eight points of damage from the airbear, Craig fell helplessly to an assault of burn including two Prophetic Bolts, an Urza's Rage, and an unkicked Breath of Darigaaz. 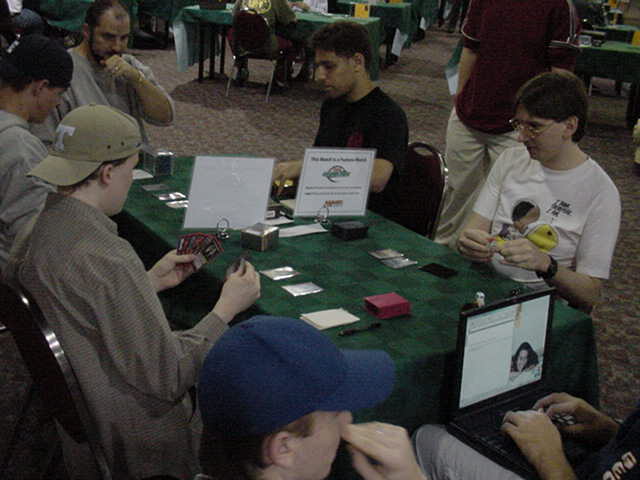 Nine lands were on the table before a single spell was cast in this game. Doug, sitting on three Islands and a Keldon Necropolis, cast an Ice to tap down a land and, most importantly, draw a card. Doug found a Yavimaya Coast off of his Ice, but at three mana, he was open to a Fact or Fiction from Craig which yielded a Goblin Trenches. The Trenches hit play and immediately began its work to create tokens.

On the next turn, Doug yet signaled that he didn't have a Mystic Snake by casting a Lay of the Land and a Gaea's Skyfolk, leaving three mana open. Craig cast a Lightning Angel on his next turn and Disrupted Doug's Exclude, sending the Angel directly into combat. The Gaea's Skyfolk was removed by an Urza's Rage one turn later, allowing the two leftover Goblin/Soldier tokens to begin attacking.

In an attempt to stop Craig's creatures, Doug cast Fire on the opposing token creatures but had to take a point of mana burn because he failed to tap a red mana in casting the spell. This changed his life from five to four after the next attack from the Lightning Angel, allowing him to be killed by Craig's Prophetic Bolt. 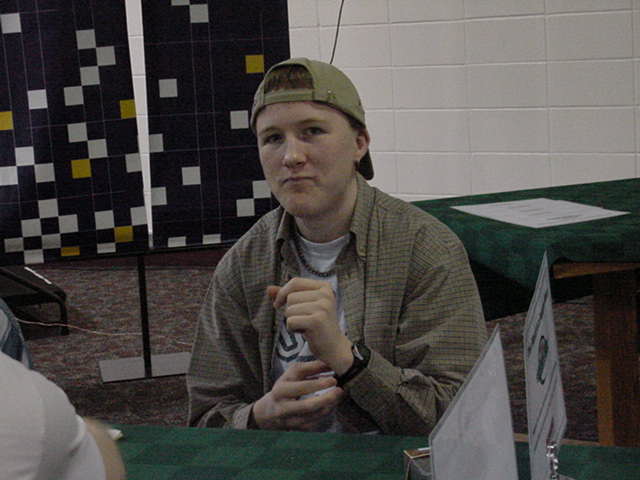 Although there was definitely nothing fast about this game, it was nonetheless completely one-sided in Craig's favor. The fact that Doug drew about four more land than Craig combined with a pair of Craig's Fact or Fictions created a large card deficit. Doug was aptly able to handle a multitude of Craig's threats including several bears and a Goblin Trenches, but it was Doug's last response which crushed him. On what became the last turn of his game, Doug chose to use Breath of Darigaaz for one to kill eight of Craig's Goblin/Soldier tokens -before- destroying the Trenches first with his Tranquility. This mistiming allowed Craig to make enough tokens in response to the Tranquility to kill Doug on the next turn with a touch of burn.

Craig Wescoe advances to 8-0-1 and remains on top of the leader board.