Fleming and Connolly are both players from Melbourne and have gained a lot by the increasing amount of competitiveness in the state. A part of the Death Dealer team, Fleming is piloting a deck of his own construction, B/G whilst Connolly is playing what seems to be the best deck in type 2 at the moment, Cunning Wake. 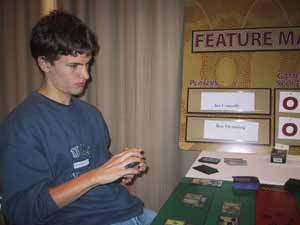 Wrath of God takes care of the board and Connolly responds to a flashed back Call by casting Cunning Wish, searching for Opportunity. The little elephant that could attacks, dropping Connolly down to 6 life, and a Phantom Centaur threatens to end the game on the next turn. Unphased Connolly casts the end of turn Opportunity and then cycles a Faith putting him back up to 8 life.

Main phased Deep Analysis nets him more cards and when the two creatures attack he plays Moments Peace. Eager to see what Connolly is holding Fleming casts a Duress but it’s met with a Counterspell. With Connolly now tapped out Fleming Living Wishes for a Nantuko Vigilante and passes the turn. Connolly drops down a Compulsion and passes the turn back, steadily gaining back control of the game as Wake always seems to do. Faith is cycled at the end of the turn and one card is Compulsioned away.

Moments Peace keeps tieing down Flemings attackers and he drops down a Genesis and a Morph creature. With the board getting a little large for Connolly’s liking he casts Wrath of God, sweeping it clean. After gaining back the Vigilante with the Genesis Fleming makes another attempt to peek at Connolly’s hand with Duress but it is met with a Circular Logic. With Fleming now tapped out Connolly slams down his Wake and Mirari, using the extra mana boost from his lands to counter the Vigilante when it attemps to come back into play and then forking a Cunning Wish with Mirari. After taking a quick glance at the clock Fleming elects to concede and move along to game 2.

Fleming is forced to mulligan a nice hand that has no green mana but excellent spells, including a Bird of Paradise. His next hand isn’t as great but it’s a keeper giving him a first turn Bird and a third turn Baloth. A fifth turn Duress reveals the hand Wrath, Wrath, Mirari, Wake and Peace and Fleming thinks for a long time before deciding to take a Wrath of God. Connolly taps out on his next turn to cast the Wake and Fleming sends in his Baloth, a turn later the same Baloth is met by Moments Peace. Braids then comes into play and Connolly uses the Wrath that was left in his hand to wipe the board clean. 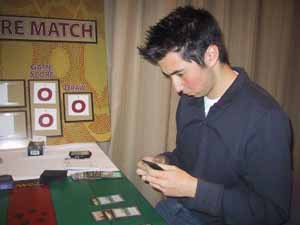 At the end of the turn the Wake gets Naturalised and a Baloth is Lapsed back to the top of Fleming’s library. With only one card left in Fleming’s hand Connolly taps out to cast a Mirari and sends the turn back praying that the one card left is not another Naturaliase. It isn’t and Connolly uses the Mirari at the end of the turn to fork a Cunning Wish, which gains him opportunity and Chastise. When the Baloth attacks back it is met with Moments Peace and Connolly drops down a Compulsion to help him dig deeper into his deck. Using the Mirari again Connolly forks the Opportunity drawing him 8 cards from the top of his deck.

Connolly plays a face down moprh which is met by an edict, and Fleming plays a Call and flashes it back tapping him out. When the elephant tokens come into attack they are greeted by a forked Chastise. The two play out the next few turns but when Connolly draws into a Cunning Wish and forks it again, he flashes Fleming a counter spell and he concedes the game scooping up his cards.