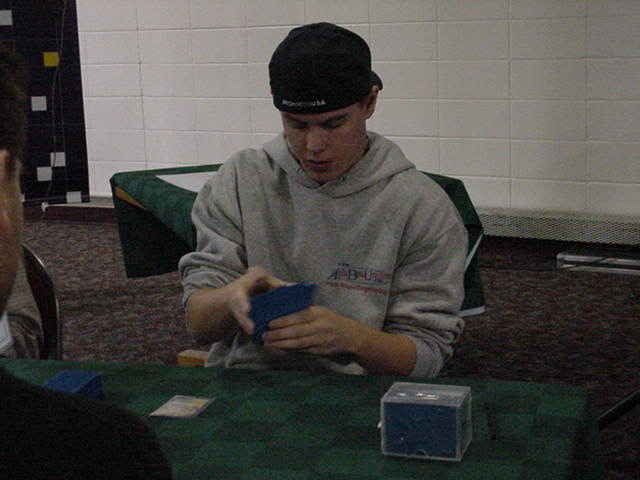 Danny, from Your Move Games, had a Phelddagrif-based U-W-g deck. As he admitted after the match...this was a bad matchup, and it went poorly for him.

In game one, Phil (going first) set the tempo early by Vindicating Danny's blue mana and Sunscape Familiar, and then dropping a Lynx. Danny did not have a resolved play until turn ten, when he put out a Meddling Mage, used Mystic Snake to stop the Dromar's Charm, named Desolation Angel with something approaching relief...

...and then watched Phil slam down Dromar on his next turn. 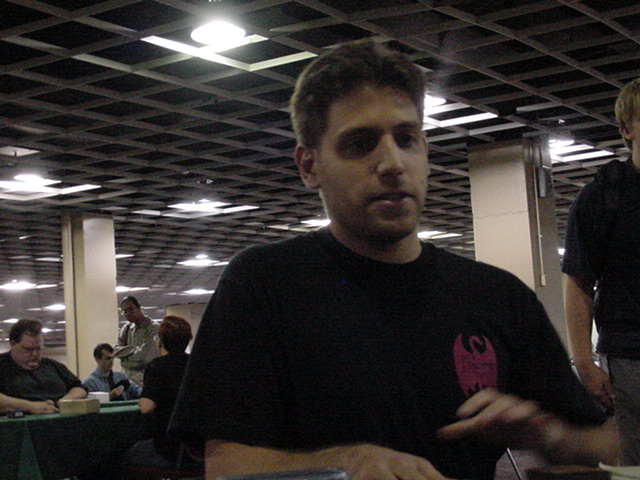 While Danny had a Phelddagrif as an answer, he was forced to Absorb Phil's maindecked Gainsay (Danny: "I thought this was a bad matchup before I saw maindeck Gainsay") and had no blue mana left to stop Dromar from washing out green. On his twelfth turn, he tried the hippo again, Phil showed an Absorb, and Danny scooped.

Game two looked a little more even, for a while. Danny's analysis after the fact was accurate (and this reporter is paraphrasing, but will use quotes anyway, because that way people will take it more seriously);

"What favors Phil is that I have one window: the mid-game. Phil owns the early game with Lynxes, and the late game with Dromar and superior countermagic. If I can get a hippo through on turns four or five, I can preserve it. But that didn't happen."

It wasn't for lack of trying. Danny kept one of two Lynxes at bay with a Sunscape Familiar for a while, Absorbed a Meddling Mage...and then gamely split up three consecutive end-of-turn Fact or Fictions (turns 7, 8, and 9) as Phil accumulated tremendous card advantage. One interesting split (the last) had Danny put Dromar and Vindicate in one pile, leaving Lynx and two Plains in the other. This was smooth, since Phil only had six mana and both players new Dromar was a dead card. 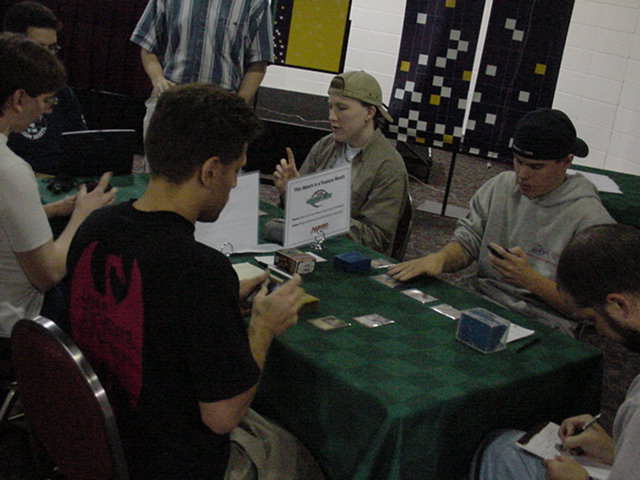 But the third Lynx ended up being critical anyway, since Danny found a second wall. While he was able to Aura Blast Phil's Yawgmoth's Agenda, the kitties were enough to finish the job.

Sideboarding: Danny pulled Excludes and a Disrupt or two out in favor of Gainsays and Aura Blasts; Phil pulled his Probes and Verdicts to get two each of Meddling Mage, Voice of All, Stormscape Apprentice, and two more Gainsay.