Seck, the winner of yesterday’s draft, is sitting in pole position needing only 2 wins from four rounds to allow him to ID into the top 8. Taking this into account he has selected a reliable deck in u/g madness. Trevilyan has gone for an interesting approach, after posting an undefeated record of 5-0-1 he has decided to play a version of Canu Opposition, a u/g/b opposition deck. The two players start off game 1 with a mulligan and Trevilyan is playing first. 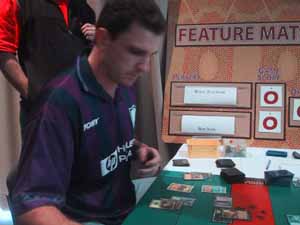 Despite the mulligan start Trevilyan still got off to a flyer with City of Brass, Bird of Paradise and then a turn 2 Shadowmage Infiltrator. Seck had the perfect answer to that with a turn two Wild Mongrel, preventing the Finkel from entering his favourite territory, the red zone. Trevilyan plays out a Call of the Herd on turn three and Seck comes into the red zone with his Mongrel. Trevilyan lets it through and then Seck summons another. Cabal therapy for Circular Logic hits, revealing the remaining 3 cards in Seck’s hand as land. Call of the herd and the Finkel come into the red zone and when Seck drops a card to his Mongrel to turn it black it gets Smothered.

Seck plays down an Aquamoeba and Trevilyan drops down a monster in Opposition. The call token and the Infiltrator tap down the Mongrel and the moeba in the attack phase and Seck has no other plays, passing the turn. With opposition clearing the path for the Shadowmage Infiltrator Seck needs something off the top of his deck fast. Call and Infiltrator enter the red zone and Seck madnesses out a Basking Rootwalla thanks to Wild Mongrel. Walla blocks the call and pumps, trading with it and the Infiltrator gets through, netting Trevilyan a card giving him a Smother for the Mongrel. When another call hits the table it’s the end of Seck's game as the Opposition and the growing pile of creatures leave him no outs. A Braids from Trevilyan simply speeds up Seck’s concession. 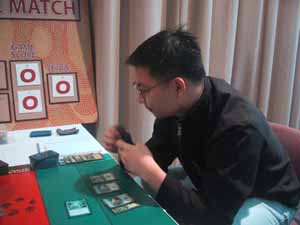 Seck starts off game two with a Careful Study, pitching Wonder and Deep Analysis. A turn one Bird from Trevilyan is matched by a flash back of the Deep Analysis. Seck casts a Spellbane Centaur and it resolves but its time in play is short lived as its Smothered at the end of the turn. With Seck now tapped out Trevilyan drops down a Phantom Centaur, normally a pain for the U/G madness deck of Seck but thanks to the pitched wonder its creature killing abilities are limited to offence. Another Careful Study from Seck doesn’t yield much in the way of cards and he discards a City of Brass and Madnesses out an Arrogant Wurm.

Trevilyan keeps the beats rolling dropping down a second Phantom Centaur. In comes the Arrogant Wurm knocking Trevilyan to 15 life, and Seck completes his turn by summoning an Aquamoeba. Seck cops a beating taking 10 damage from the two Centaurs as they slam into the red zone dropping him down to 2 life. Trevilyan plays Polluted Delta and sacrifices it for a swamp, Finkel attempts to enter play again but a Logic is discarded to the Aquamoeba and it gets countered. Seck has 4 cards in his hand but has no play, preparing to chump block with his two creatures. Faceless butcher comes into play from Trevilyan locking the Aquamoeba and Seck scoops em up, flashing a fist full of land.