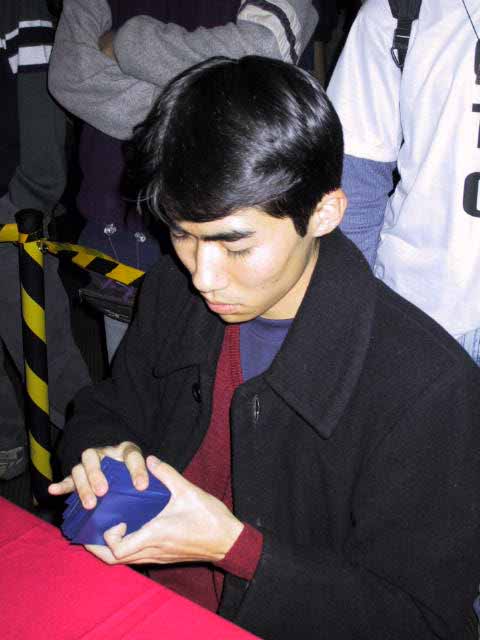 The silent Marcos TanakaMarcos Tanaka is a former Brazilian national champion. Dressed in dark clothes, serious and silent he is almost the complete opposite of his opponent. Olivier Ruel is known as one of the most energetic players in the Tour.

The real story here is the same story you keep hearing on the last round of the first day of any Grand Prix: whoever wins might make day two. The loser gets to play in the cheap side events and cheer from the sidelines.

It didn't start well for Olivier who to take a triple mulligan. Yes, triple. Tanaka came out calmly with Nightscape Familiar while Olivier played Island, Forest and Swamp.

On his fourth turn the French tried Collective Restraint but Tanaka had Counterspell. He followed that with Psychatog, but let Ruel have Pernicious Deed. Scared of the enchantment Marcos played Upheaval.

They both went back to play land and saying go. Again Tanaka played Familiar and again he tried the Psychatog but this time Olivier had Evasive Action to stop it. Taking that opening the French played the Deed once again and tried Collective Restraint.

Tanaka Counterspelled that and they went back to "Draw-Go" until the Brazilian played Cunning Wish to get Fact or Fiction. Olivier tried his own Fact or Fiction, which Tanaka countered.

This gave Olivier a chance to blow the Deed and force Tanaka to tap out or lose the Familiar. He Gleefully took it and Tanaka tapped out. The French took the chance to play Allied Strategies for three.

He now had a hand full of cards but Marcos Tanaka was still in control. He played Psychatog, countered another Pernicious Deed but allowed another one to resolve.

With Ruel almost tapped out Tanaka tried Fact or Fiction but the French had another Evasive Action. It wasn't very important. Despite the Deed Olivier couldn't stop the first swing from the Psychatog. When you are at ten life, late in the game ten life isn't a lot against Psychatog. 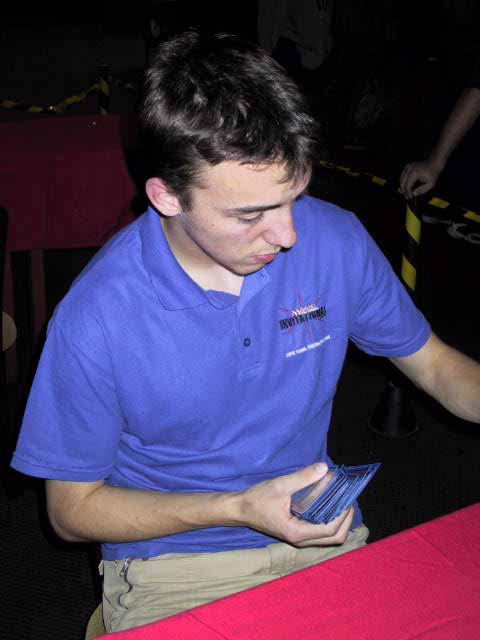 Olivier Ruel had more than his share of mulligans today.Again Tanaka had the second turn Familiar but his second Blue source came into play tapped. This gave Olivier a chance to Duress getting Upheaval over two Chainer's Edict and seeing Psychatog.

Marcos' next draw was a second familiar and he immediately played it. Knowing the coast was clear Ruel played Allied Strategies for four. He liked that so much he followed it with Fact or Fiction and Worldly Counsel setting up a brutal hand.

Finally Olivier Ruel showed what his deck could do: he played Holistic Wisdom and Circle of Protection: Black. Marcos tried to race the incoming insanity by playing Psychatog to keep the COP busy.

Ruel resolved Global Ruin, keeping five lands, and played Ordered Migration. The game was now in Olivier's hands and Tanaka even made a big mistake splitting a Fact or Fiction.

He shook his head, but he knew he was already thinking about the third game. This one seemed to be just a question of how fast Olivier could finish it. The French unleashed a second Ordered Migration after allowing Tanaka a second Psychatog.

With seven tokens in the air there was little, or nothing that Tanaka could do, even with three Psychatogs on the table. 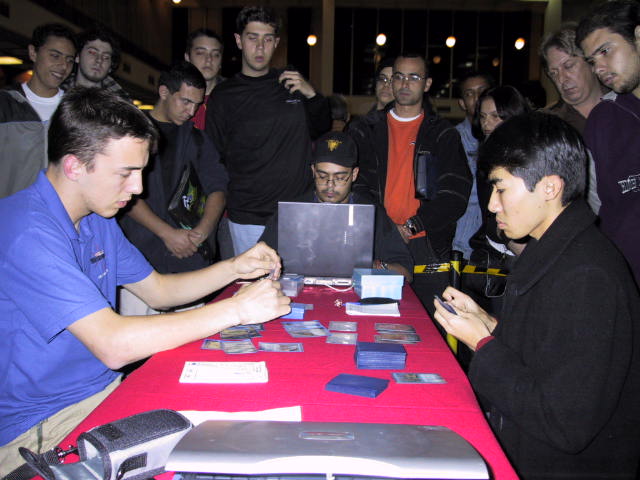 The crowd enjoying the match.With sixteen minutes in the clock they retouched their sideboards - by now Tanaka had figured his Chainer's Edicts weren't very useful - and shuffled in a hurry. A draw would do neither of them any good.

The first to blink was Ruel in the second turn. He tried Worldly Counsel but Tanaka had the Force Spike. Marcos tried Fact or Fiction and the French returned the favour with Evasive Action.

The "Try draw spell meet counter" theme continued when Ruel tried Allied Strategies and Tanaka used Cunning Wish to get Gainsay. On the next turn Olivier tried another Strategies and again got it countered.

By now, he thought Marcos Tanaka had to run out of counters. He tried Holistic Wisdom and the Brazilian showed him Circular Logic. When Marcos Wished for Fact or Fiction they got into a war of Olivier's Fact or Fiction is response. Eventually it resolved:

From that the French got Pernicious Deed. Still at a blistering pace they slugged on for some sort of advantage. Tanaka played Fact or Fiction getting Psychatog and Aether Burst out of it.

Olivier Ruel tried Destructive Flow and Tanaka allowed it. By now there were only five minutes on the clock. It seemed unlikely that any of them could punch through something that would take the game.

Marcos tried Psychatog and surprisingly Olivier allowed it. He also allowed Nightscape Familiar. Ruel tried Fact or Fiction and Tanaka countered it. After a deep breath the French figured out he had to try the COP: Black now.

He begged Marcos not to have the counter but the Brazilian used Cunning Wish to get Circular Logic and stop it. They now had less than one minute on the clock and only Tanaka seemed able to win the game.

Olivier played Nantuko Monastery to chump and when on his next draw we heard the clock signalling the end of the round. A Duress took out Tanaka's last counter but Ruel had nothing to play.

In came the Psychatog and Familiar once again and this time Marcos Tanaka had enough fuel to finish the game and the match.