At the opening of the round, each player was deck-checked. The check took so long that there was enough time to conduct an in-depth conversation about governmental airline subsidization. Who knew that airport security was paid minimal wage and had a 300% turnover rate!? 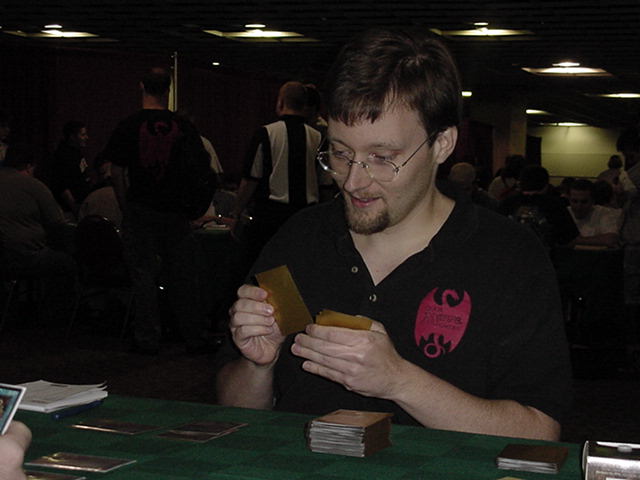 Rob started the game, but Taer had both a Goblin Legionnaire and a Goblin Trenches on the table before Rob played his first card, a Phyrexian Rager. Unfortunately for Rob, he was still lacking his fourth land on his fifth turn and tried to slow Taer down by Recoiling his Coastal Tower. Rob found his fourth land, and his first white mana source on his sixth turn, but unfortunately it was a Dromar's Cavern which set him back even further. Rob then dropped a Spectral Lynx, but it was the target of a split Fire at the end of his turn, bringing him to eight life. Taer attacked with 4 Goblin/Soldier tokens and a Galina's Knight on his next turn and added a Meddling Mage to the team. After some haggling over whether he should name Treva's Charm, Darigaaz's Charm, or Dromar's Charm, Taer finally chose the correct one and cut off any chance for Rob to mount a comeback, ending the game. 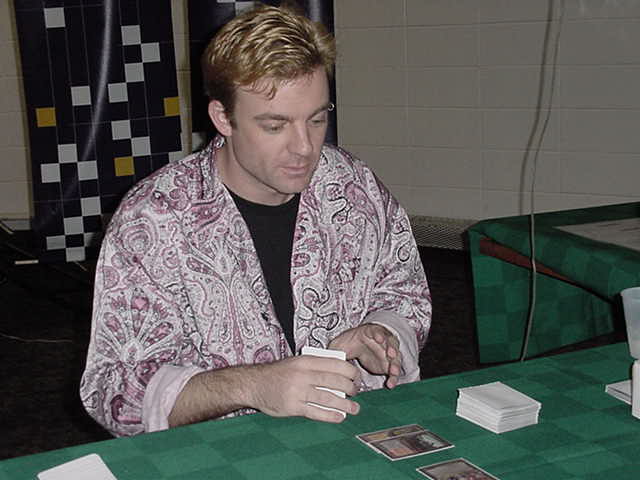 Rob started off game two with two tapduals met by two basic lands and a Meddling Mage naming Spectral Lynx from Taer. A third turn Phyrexian Rager from Rob prevented any attacks during the next turn. Taer simply dropped another Meddling Mage, this time naming Dromar's Charm, and passed the turn. Rob played an Addle on his next turn revealing his opponent's hand: Fire/Ice, Galina's Knight, Absorb, Repulse, and Mountain. Rob chose Fire/Ice, prompting Taer to use his Repulse on the Phyrexian Rager to clear the way for his Mage army. Rob cast Vindicate on the Meddling Mage naming Spectral Lynx and proceeded to drop one.

Taer used a recently top-decked Fire/Ice to clear out the Lynx while Rob was tapped-out and continued swinging with a Meddling Mage and Galina's Knight. Taer dropped an uncontested Goblin Trenches, putting significant pressure on Rob to find an answer. Finally, at five life, Rob was forced to waste a Dromar's Charm to gain life and a bit more time to exploit the fact that Taer wasn't drawing more land to supply his Goblin's Trenches. With only two land on the table, Taer generated just enough tokens to put Rob in Urza's Rage range, but before combat damage resolved, Rob played yet another Dromar's Charm to keep himself out of an unstable situation.

Taer dropped a Battlefield Forge next, and Rob's wisdom in predicting the red mana source showed. Rob played a second Phyrexian Rager dropping him to six. Taer cast an end of turn Rage on Rob and, with only a Lightning Angel in hand, topped a fourth land to kill Rob and take the match.