Surprisingly, this match actually had some interesting chatter during the round, as these players have known each other for quite a while. Craig is playing U/W/R while Eric is playing a version of No-Mar. 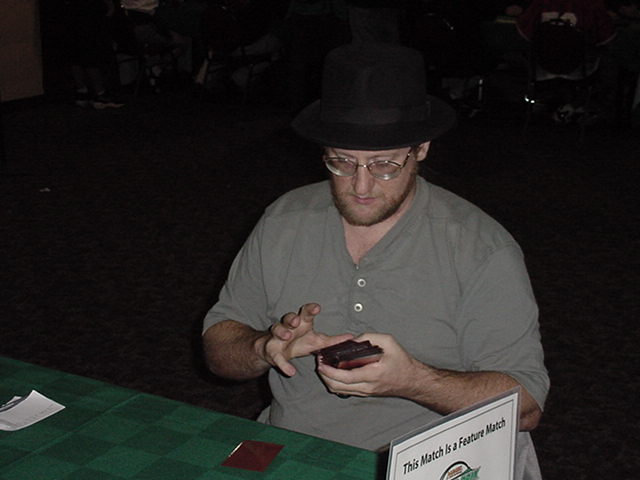 Craig began the game and dropped two Meddling Mages naming Spectral Lynx and Phyrexian Rager, but after two Gerrard's Verdicts from Eric, Craig lost the rest of his hand and consequently fed Eric six life. Craig drew his fourth land on his next turn and attacked Eric down to 20 life. In true feature match fashion, Craig called out Lightning Angel from his deck, and it was indeed on top. Craig declared himself a "savage cheater," and only a couple turns later Craig said "hm, not a bad draw step for me," and dropped another Lightning Angel. According to Craig, Game 1 was all about "my amazing draw versus Eric's mana screw."

Eric led game 2 with a Salt Marsh and a Caves of Koilos, casting Addle on blue during his second mainphase. After taking a Lightning Angel, Craig had a creatureless hand of 6 containing Fact or Fiction, two Prophetic Bolts, and three land. Eric continued the pressure by casting a third turn Vindicate knocking Craig back down to one land. In the next set of turns, Eric's Spectral Lynx matched wits against Craig's Goblin Legionnaire. Each player chose to cast a main phase Fact or Fiction with Eric getting a Yawgmoth's Agenda out of the trade and Craig getting three land a Dodecapod at the cost of a Meddling Mage. 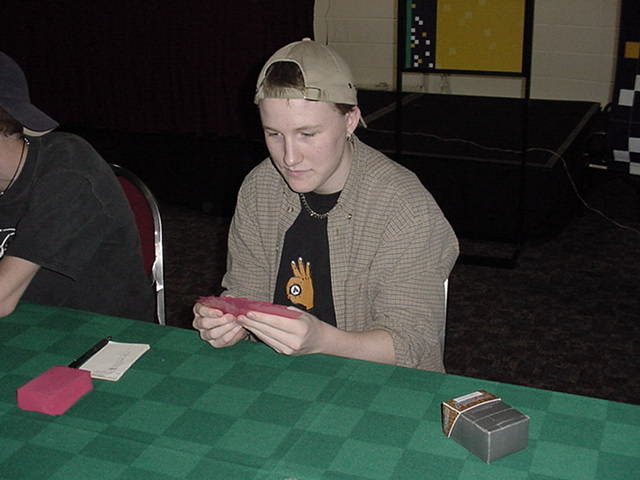 A Dromar's Charm removed Craig's Goblin Legionnaire while he was tapped out, but Craig responded with Goblin Trenches, an extremely scary card against any late-game opponent. Eric decided to take the opportunity to lay his Agenda while Craig declined to sacrifice his land to the Trenches, instead opting to cast an end step Prophetic Bolt. Eric finally got the opportunity to use the Vindicate in his graveyard to take out the Goblin Trenches, resulting in four token creatures being generated. Craig sent his tokens into the red zone during his turn; Eric declined to block one with his Spectral Lynx, instead deciding to cast an end step Fact or Fiction. Eric generated another body on his turn in the form of a triple-kicked Emblazoned Golem, but Craig was able to serve into Eric's creatures, reducing him to six. Two Urza's Rages later, Eric was dead.

Since both players were undefeated coming into this round, Craig Wescoe will advance to 6-0 while Eric Taylor drops to 5-1.