As the two players make their way to the feature match table they know exactly what they’re playing for. A perfect start to day one, the 6-0 record and the title of draft champion. Seck’s B/G deck has been powering through the rounds while Jiang’s W/B Cleric deck, which he earlier described as terrible, is obviously not as bad as he first thought. 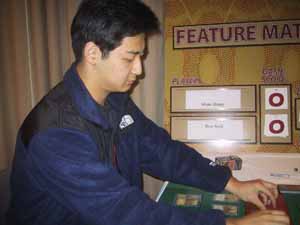 Seck gets the game underway with a Stonewood Invoker, which is met by a Battlefield Medic. Seck is trapped on two mana, but still manages to cast out another Invoker and a Wellwisher on consecutive turns. Shung summons a Cabal Archon and a turn later its heading into the redzone, backed up by a freshly summoned morph. Jiang flips over his morph of a Daru Healer at the end of the turn and Seck plays down Wirewood Herald. Jiang plays out Gluttenous Zombie and passes the turn, with Seck gaining 4 life. Seck plays down a morph and passes the turn back to Jiang who attacks with his Gluttonous Zombie and casts a Swooping Talon. Explosive Vegetation spells an end to the mana screw for Seck, while Jiang’s Talon provokes the morph and attacks with it and his Zombie killing it off.

Jiang casts a Vile Deacon and a Starlight Invoker and Seck removes the pesky Talon with Cruel Revival. Gluttonous Zombie attacks but with Seck gaining 4 life a turn from the Wellwisher its really on damage control. Seck plays out a Berserk Merlodont and passes the turn with Jiang activating his Invoker gaining some life of his own. When the next two turns end in almost identical circumstances Jiang offers an ID and Seck just laughs, Jiang replies “No seriously…. ID?”, but Seck declines and Jiang shrugs, simply casting Ward Sliver naming green. 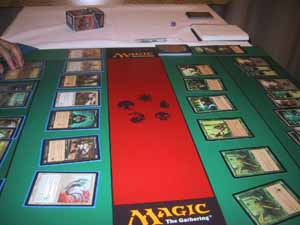 The life gaining continues for a few more turns with both players dumping out creatures, but it’s a Timberwatch Elf from Seck that finally breaks the stalemate. Jiang now has to start forcing the issue and Vile Deacon attacks as a 9/9 but its chump blocked by Herald, getting Seck Wirewood Savage. Seck summons a few beasts and then notices his library might be getting a little low when Jiang makes a grab for it counting the 10 cards that are left. Now Seck starts going on the offensive with his two invokers, pumping them with Timberwatch Elf and their abilities whenever he gets the chance. Despite a Harsh Mercy from Jiang naming Clerics he is unable to stop Seck, who named eleves, from attacking with his Invokers and pumping them with the Timberwatch Elf.

Seck plays out a turn 2 Elvish Warrior and sends it in on turn 3 playing out a morph to back it up. Jiang plays out a turn three morph but declines to attack leaving it back on defense. Seck on the other hand is more than happy to send his little man into the red zone, and when Jiang blocks morph on morph Branchsnap Lorian flips over and deals 3 to the facedown morph and 1 to Jiang. Akroma’s Devoted comes into play for Jiang effectively stopping Seck from attacking so Seck continues to simply cast creatures. Another morph joins the team but its his play a turn later of Anurid Murkdiver that means the stalemate will be broken. Jiang plays out a Gluttonous Zombie, giving him a route through the stockpiled defenses. 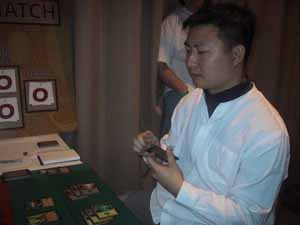 The two creatures trade blows back and forth, nibbling at their masters life totals. Ward Sliver makes an appearance but its forced to stay on defense against the growing Seck Force. Jiang plays out smokespew invoker and Seck replies by sending men into the red zone leaving behind his Elvish Warrior. Ward Sliver blocks a Merlodont, Devoted blocks a morph and two morphs face off against each other. Jiang now finds that he’s trapped on 7 mana, only needing one more to make his Smokespew active and take down the Anurid that’s slowly killing him. Jiang dredges for Clerics and gets back his Healer that traded with Secks Morph. Jiang casts down a Swooping Talon, finding himself on 8 life still unable to draw that one land he needs to activate the Invoker.

With one turn to go Jiang draws the land he needs and wipes out the murkdiver. Cruel Revival on the Talon allows Seck to retrieve his Murkdiver from the graveyard. Seck summons the Murkdiver and its killed off by the Invoker once more. A second cruel revival on a summoned Ward Sliver allows him to retrieve the Murkdiver and when it is Invoked for the third time Seck has Wirewood Pride to keep it alive. Jiang simply shrugs and extends the hand.