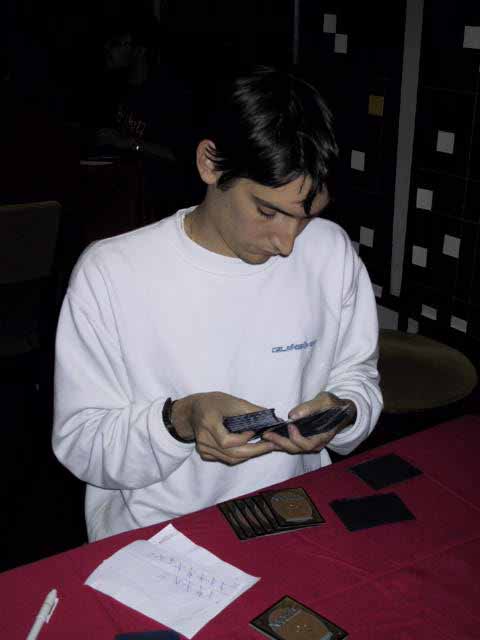 All the way from France, with only one bye... Florent Jeudon!Florent decided to come along to Brazil with the Ruel brothers after their search for a cheap ticket to Grand Prix New Jersey got them a great deal for São Paulo instead. He only had one bye but he calmly, as ever, showed his ability reaching this round with four straight wins.

Across the table he is facing a former Pro Tour champion trying to get back into the top spots. One of the two Americans present, Steve OMS, enjoyed his three byes before wining the next two rounds.

Steve started with Birds of Paradise while Jeudon played Nightscape Familiar. That proved a bad move as the American used Fire/Ice to take it out on the next turn. The French allowed Deep Analysis but had Counterspells for Opposition and Phantom Centaur.

Althought their pace wasn't exactly slow the game was slow. OMS played a second Analysis and after getting a Merfolk Looter countered played a second one. A Repulse took it away for a turn and on its return trip Jeudon used Memory Lapse to delay the problem.

Finally the Looter made it into play and for once Steve was the one doing the countering when he stopped Upheaval. A second looter came into play as the American browsed through his deck at an amazing speed.

He finally found a Flametongue Kavu and played killing his own Birds just to speed things along. Throughout all this Florent Jeudon kept drawing cards, playing lands and saying "Go". 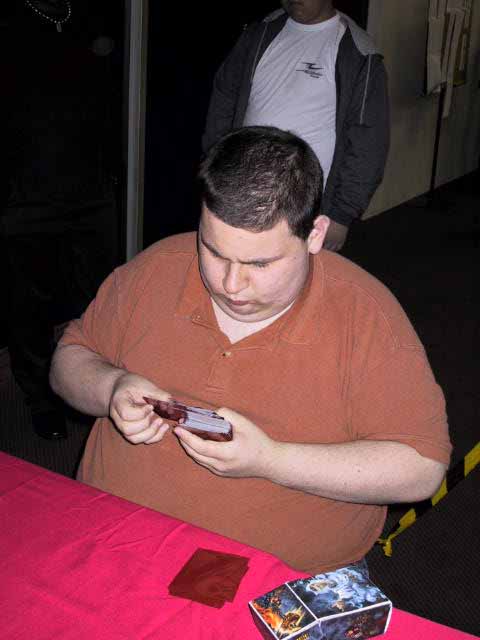 One of the two Americans present.... Steve OMS!Until he was one swing away from losing the first game. He tried to Repulse the Kavu. Four counters later he got what he wanted. Still the swing brought him down to three, more than enough for Steve OMS to finish him on the next turn if the French couldn't come up with something.

He did: Pernicious Deed. Steve shook his head and allowed it. The Deed took out every non-land card on the table (meaning it clean OMS' side). The American immediately rebuilt his strike force with Wild Mongrel and Phantom Centaur.

The French played Upheaval, now sure his opponent had no available counters, but couldn't follow up on it with anything else. He simply replayed a land. Two turns later Steve tried Wild Mongrel and Jeudon had Force Spike.

On the following turn a second Mongrel made it into play. Florent Jeudon drew his next card and conceded. 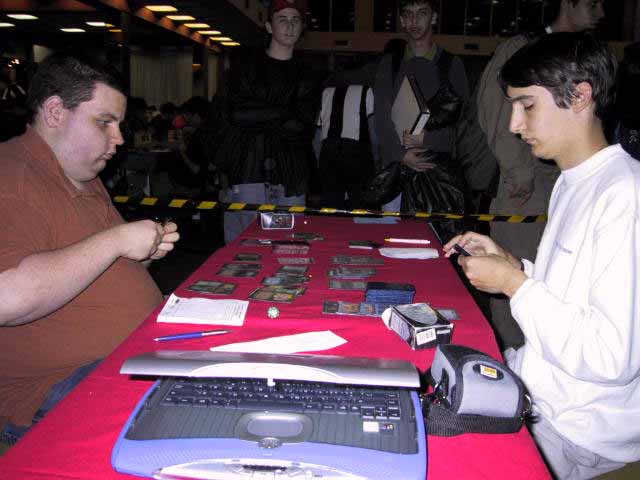 It's all about the concentration.Things didn't start well for the French, he had to take a mulligan. Apart from that the game had almost the same first tuns. Jeudon played Nightscape Familiar while Steve dropped mana creatures and played Deep Analysis for some serious card advantage.

He followed that with Wild Mongrel and Phantom Centaur while the French kept his game face despite being clearly locked at two lands. The Familiar constantly stopped the Mongrel but the Centaur was a fast clock.

Taking advantage of his opponents need to tap out during his turn (to block and save the Familiar) OMS dropped Merfolk Looter an started looking for extra trouble. He had almost no need for it.

At five Jeudon finally found his third land and played it. But Steve OMS' hand was perfect and the French had nothing. Sure as clockwork the Phantom Centaur finished the game on its fourth swing.