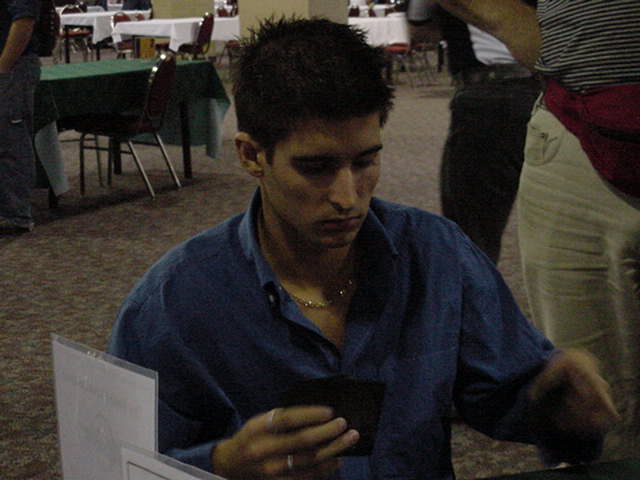 While neither of these players have made Top 8 at a major DCI event, both of them have stormed through the Minneapolis Grand Prix using decks without Desolation Angel, Blurred Mongoose, Spiritmonger, Dromar's Charm, or Mystic Snake.

Andrew Wolf, from Atlanta, was playing R-W-U with Lightning Angel as the primary win condition, and Goblin Trenches as backup. Nikolaus Vincent, from Green Bay, was playing R-B-w with Shivan Zombies as a metagame to Spectral Lynx...and his own Spectral Lynxes, as well. Oh, he also had Skizziks and Urza's Rage.

Both decks had Flametongue Kavu, who were all probably quite relieved to have something to do for once.

This match was 100% mulligan free, and approved for your enjoyment. 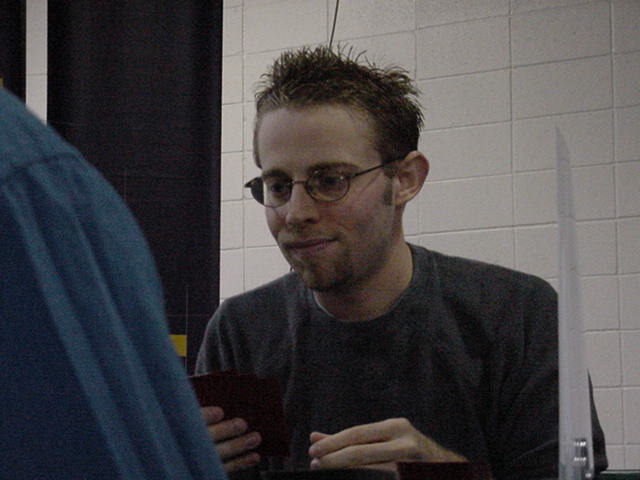 An amusing situation arose early in the first game as Andrew, going first, played a second turn Meddling Mage, stared at his opponent's swamp...and had no idea what to call. Eventually, he decided that "Recoil" was a safe choice. It was a good guess; but it was incorrect, as he learned when Nikolaus dropped a Battlefield Forge, and then a Shivan Zombie.

Lots of creatures died this game, which always makes this reporter happy. The Zombie was fired, the Mage was Terminated, the next Mage (calling, somewhat unsurprisingly, Terminate) saw a bit of Urza's Rage, a Blazing Specter was burned by a Flametongue Kavu, who in turn enjoyed the heat of another Flametongue Kavu...

...who then watched a Lightning Angel come out on Andrew's side, who flew over three times before a Ghitu Fire on turn eight sealed the win for the peachy guy from Georgia. (Do you folks in Georgia hear that a lot? Sorry. Tell you what, we'll slam Wisconsin down below.)

Game two also saw a lot of creature action. A Shivan Zombie and Goblin Legionnaire faced down two Galina's Knights; the Galina's Knights appeared to have the upper hand, until two consecutive Skizziks (one on turn four without kicker, the next on turn five with happy feet) came storming across the board. 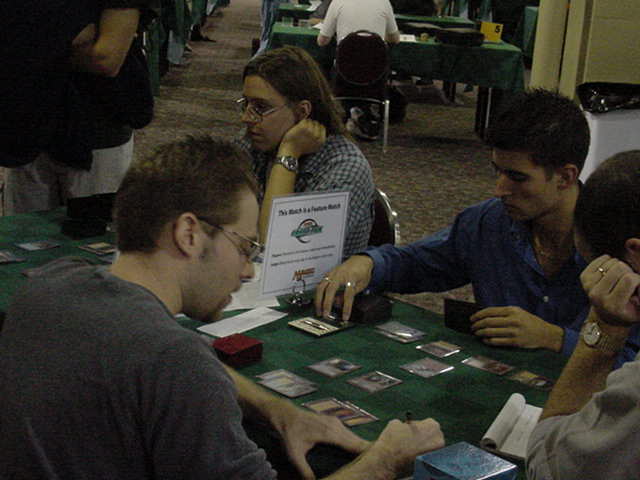 Unfortunately, the kicked Skizzik and Shivan Zombie ran into Andrew's Jilt, which he had sided in for just such an occasion. This excellent tempo card made all the difference in the match; with both players at nine life, a Flametongue Kavu scorched Nikolaus's Legionnaire (no mana left to activate for anything), and the Green Bay player, not unlike Brett Favre on every other play, fumbled as he re-kicked the Skizzik and sent it in. This brought Andrew down to four but left no blockers; and a turn six Lightning Angel joined forces with the two Knights and Flametongue Kavu to finish the hapless Wisconsinites off. Go Vikings! Ahem.

Sideboard decisions for the players: Andrew pulled out his late-game Goblin Trenches and a Prophetic Bolt or two to make room for Jilt and Dodecapod. He felt the Dodecapods would still be useful, even if Nikolaus sided out the Blazing Specters. In fact, the Specters did come out, in favor of two Pure Reflections, one Obliterate, and another Flametongue Kavu.