The match began in a friendly, almost jovial mood, as both players were high enough at the top of the standings to expect a paycheck at the end of the day. Sitting at the other end of the features match table, Andy Wolf commented: "It's rednecks versus the locals!" Vacek is the one defending the pride of Minnesota, while Brian Davis hails from Memphis. Davis chose to play a Domain variant. Although the deck has not had much success since Budde used it to win London, Davis practiced it to death and was clearly able to obtain good results. Vacek was playing a variant of a Blue-White-Black Desolation Angel deck that has been all the rage in recent weeks. 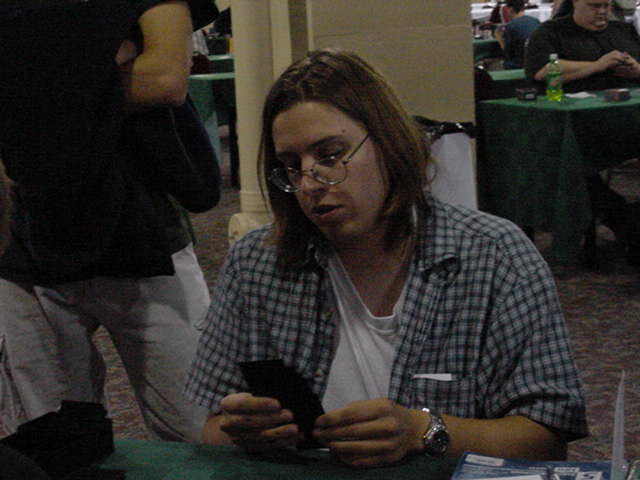 The first game started to Davis' advantage. He won the die roll and got to play first. His opponent took a mulligan, losing the advantage of the extra card - the only consolation of going second. Davis also was able to get Domain (one land of every color) out by turn five with some help from Harrow and Lay of the Land. Vacek summoned a turn 2 Spectral Lynx. Not having drawn a Sunscape Familiar, Davis was now on the clock.

The next few turns were all Vacek. He used Gerrard's Verdict to make Davis discard a couple of good cards, then countered Collective Restraint. Davis had Evasive Action, but chose not to use it on saving his Restraint - two points of damage per turn was the clock he apparently was willing to live with. Davis resolved Allied Strategies on the following turn, more than making up for the Verdict. The two players battled for card advantage, but Davis' deck was designed to win that battle. Whereas all Vacek could do was resolve a pair of Fact or Fictions, Davis was drawing five cards off of his Allied Strategies multiple times, and using Worldly Counsel to dig deep into his deck.

Davis got out a Sunscape Familiar. Down to eight life points, he was now able to stop Vacek's only creature from damaging him further. Davis was finally ready to make a move - he cast Global Ruin and used two Evasive Actions to counter Vacek's Absorb and Fact or Fiction. After that resolved, he cast Lobotomy. Vacek's hand consisted of Vindicate, Rout, and Lobotomy. Davis thought for a while, then chose to remove Lobotomy from the game.

Down by a lot of cards, Vacek realized that he would have to play very aggressively if he had any hopes of winning the game. He used his Vindicate on Sunscape Familiar rather than a Swamp or a Mountain (which would break Davis' domain) and attacked with the Lynx, bringing his opponent down to six life points. Davis had the answer in hand though, he cast Collective Restraint next turn. A turn later he finally displayed one of his win conditions, summoning Sabertooth Nishoba. A Restock targeting two Evasive Actions convinced Vacek to concede, in order to make sure there was enough time for the next game. There were 27 minutes remaining on the clock. 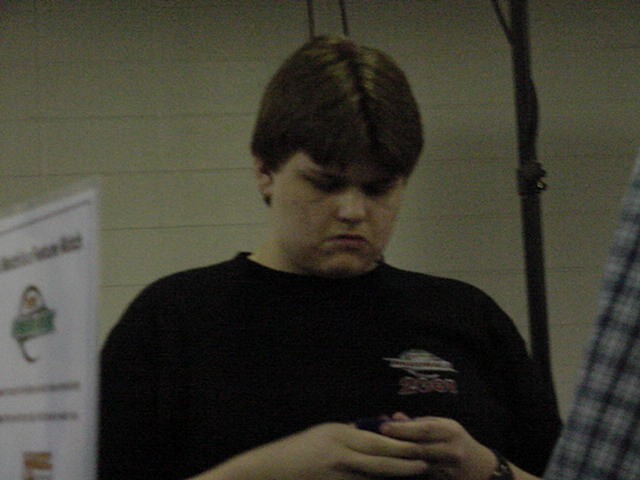 Davis used a different strategy for the second game. Instead of waiting for many turns to establish total control, he was able to use his mana acceleration and inexpensive countermagic to get an early Spiritmonger onto the table. Vacek had already gone through a few of his Vindicates and could potentially be in a lot of trouble there. He was holding a Rout however. He cast Lobotomy, trying to make sure that Davis was out of countermagic, but Davis used Gainsay to stop that. With only three land types in play, Davis did not bother getting an Evasive Action back with Restock next turn, and so Vacek was able to force Rout through.

Davis drew three more cards via Allied Strategies, and protected it with Gainsay. That forced him to tap out, allowing Vacek just the opening he needed. Vacek spent seven mana to cast Desolation Angel, destroying Davis' precious mana base. Davis conceded, with just under fifteen minutes remaining in the round.

Vacek mulliganed in the final game. Davis kept, and started the game by laying down an Island and casting a Chromatic Sphere. On his following turn, he activated the Sphere generating green mana . . . burned for one and passed the turn. Over the course of the tournament, Davis often kept clearly subpar hands that could become excellent if only he drew another land. This time, he didn't. However, his opponent could not capitalize on it full as he did not have a fast draw. Davis missed a few land drops, but was soon up to four lands, and three land types.

Double Harrow allowed Davis to catch up to Vacek in mana development, despite a very poor start. He forced through a Lobotomy, decimating Vacek's hand and removing his Absorbs from the game. With an excellent position in the game, Davis was now playing as much against the clock as he was against Vacek - there were only seven minutes remaining.

Vacek resolved Fact or Fiction, picking up a Dromar's Charm and Phyrexian Arena. He tapped out to cast the Arena, hoping to get back into the game. Davis used his turn to cast Legacy Weapon. Vacek forced through a Lobotomy, getting rid of Davis' Evasive Actions and leaving his opponent with a hand of Gainsay and land. Davis removed Phyrexian Arena from the game with the Legacy Weapon. Vacek may have made a serious mistake at this point, not using the Aura Blast in his hand to destroy the Arena instead and to draw a card. Davis showed his opponent no enchantments at all up to this point, so there was hardly a reason to hold on to it. Davis ended up removing the Blast with Lobotomy next turn, as it was the only non-land card remaining in Vacek's hand. 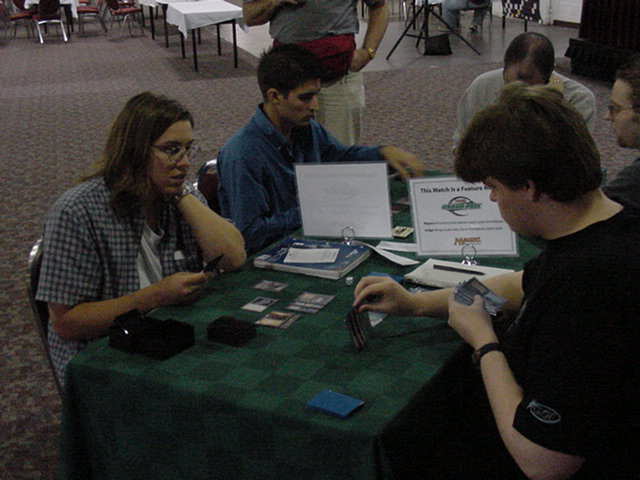 Vacek drew off the top of his deck a lot better than Davis. His first Fact or Fiction was countered by Gainsay. Second one resolved, revealing four lands and a Vindicate - a good thing, considering that Vacek would be drawing those cards one by one if not for the FoF. Davis finally drew and cast Allied Strategies. Vacek responded with yet another Fact or Fiction. Davis cast a Sabertooth Nishoba and ended his turn just in time so that time was called during Vacek's main phase.

Vacek used Lobotomy to remove Davis' Rakavolver from the game, and a Vindicate to destroy the Nishoba. It was extremely unlikely that either player could win the game at this point, but Davis would try. He cast another Allied Strategies, finding Legacy Weapon and a Restock. He was doing a lot of math, trying to figure out if there was any potential of Restock for the win. With three Sunscape Familiars in play, Davis was able to use Harrow to actually generate mana - cast it for one mana and put two lands into play. He Restocked Sabertooth Nishoba and Spiritmonger and cast both of them, making for one monstrous turn!

All of a sudden there was real possibility of Davis winning the game. He had two more turns to attack in, and could potentially deal 22 points of damage! Vacek used his turn to summon Desolation Angel with kicker. He could now trade in combat with Sabertooth Nishoba and survive long enough for the extra turns to run out. Davis did not have another source of damage, or a way to remove the Angel, forced to accept the draw.