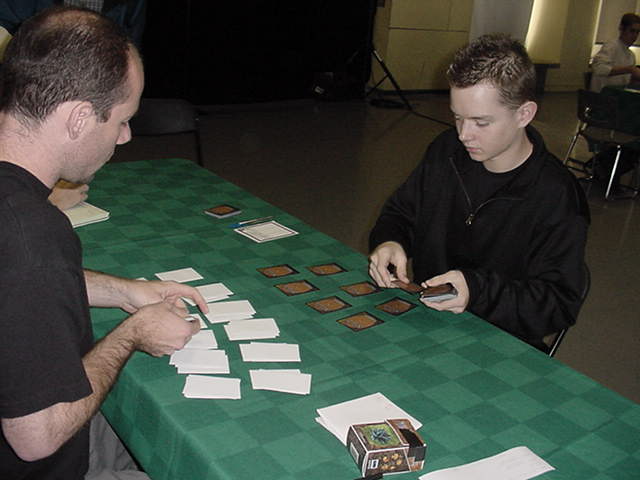 Humpherys comes into the match riding a consecutive winning streak at Grand Prix events that includes GP: Minneapolis and GP: Columbus, which he won with teammates Rob Dougherty and Darwin Kastle. Hegstad, a member of AlphaBetaUnlimited.com, has been a consistent performer on the pro circuit for the last 6 months but has yet to earn a title.

Both players come into the round with 7-2 records. A victory is required for either player to have a realistic chance at making top eight. Humpherys is playing a U-W-r deck sporting a lot of stall and board control elements. Hegstad has brought a fast B-U deck with weenies and removal, including the powerful blue enchantment Chamber of Manipulation, that he hopes will run over his opponent. 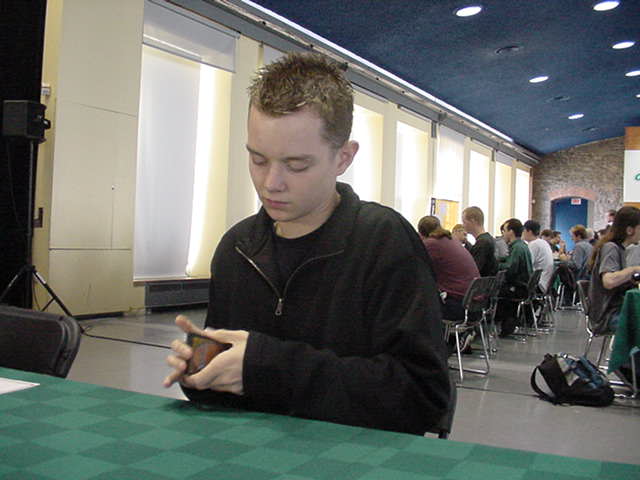 Both players keep their hands and establish their mana bases quickly. Humpherys creates a wall of blockers early, playing a consistent stream of threats, including Hallowed Healer, Blessed Orator, Angelic Wall and Cephalid Looter. Many of these are met by Hegstad's removal spells, but the defense is enough to keep Hegstad from threatening with anything serious. By the mid-game Humpherys is sitting behind the Wall and Orator - which has been enhanced with Psionic Gift - and Hegstad is sending a Wererat and Aven Fisher into the Red Zone. The deadlock is broken when Hegstad sacrifices a Seafloor Debris to fill his graveyard enough to kill the Orator with Ghastly Demise. He then adds a Looter of his own and starts swinging for the fence like Barry Bonds. Without the Orator things look pretty bleak for Humpherys. He stops the Rat with a Kirtar's Desire, but Hegstad has added a Gravedigger, Dusk Imp and Chamber of Manipulation.

Cue the comeback. Humpherys uses Embolden to survive the turn, then drops Mystic Zealot and Auramancer, returning the Psionic Gift to his hand. Over the next couple of turn he adds Cephalid Scout, Pilgrim of Virtue and Chainflinger. He quickly reduces Hegstad's army to nothing and then goes to work on his life total. It's not long before Hegstad, who can't find a solution to the Tims and is mindfull of the clock, concedes to save some time for game two. 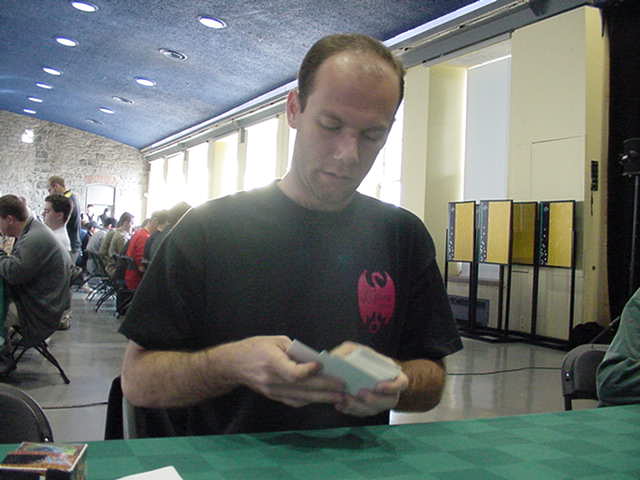 Only a few minutes remain in the match, and Hegstad's chances of earning a draw. Again both players keep their hands and start quickly. Hegstad busts out Filthy Cur and Dusk Imp, going for the quick win. The Imp is removed by Engulfing Flames, only the second red card Humpherys has played in the match, but Hegstad continues to play out threats. Humpherys counters his opponent's quick army with a Mystic Zealot and a Looter. His Chainflinger is removed by Patriarch's Desire. Hegstad swings with an Aven Fisher while trying to find a way through the Zealot. It finally comes in the form of Ghastly Demise and Humpherys drops to six. The following turn he is at two, but that is as close as Hegstad could push him as on his final extra turn he topdecks a Pilgrim of Virtue to hold off a Wererat and has Syncopate in hand for any threat Hegstad might muster on the last turn. Hegstad draws his card and extends his hand.