Julian is the New Zealand's vice-champion, or the player who lost the finals to a twelve-year phenomenon. He was in town to visit a friend and decided he might as well take the opportunity to play in the Grand Prix. Even if he hasn't played Standard in quite a while.

Jose Barbero is one of the consistent top players in Argentina, and Latin America. He played in the Top 8 of the last Brazilian Grand Prix, in Curitiba, so he knows a bit about success in Brazil. 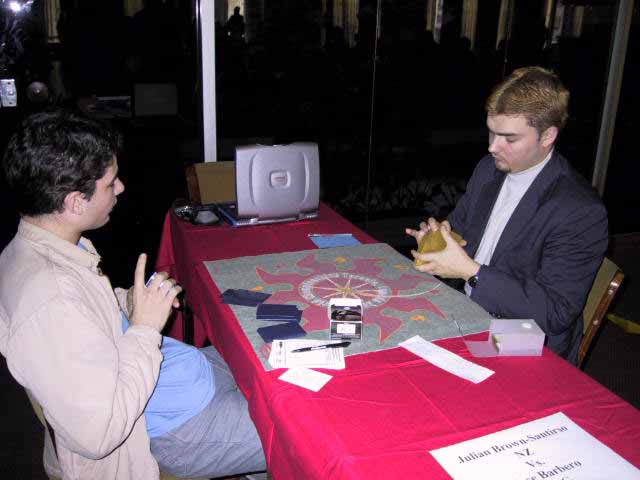 Discussing the details of the previous game.Julian played a turn two Mongrel and tried Living Wish on his third turn only to it Countered. On the next turn he dropped Yavimaya Barbarian.

While Barbero was still trying to figure out what the Brown-Santirso playing testing group had come up this time Julian tried to play Armadillo Cloak. Again the Argentinean agonized before allowing it. The next swing brought him down to ten.

Julian: "Since you didn't counter it I guess you really want to play Fact or Fiction."

That was exactly what the Argentinean did.

Jose: "Since my Fact or Fiction is foil can I turn over five cards?"

He took the first pile and tapped out to play two Chainer's Edicts on the next turn clearing the table.

Jose: "I topdecked the second one, but I had another plan."
Julian: "And I made a mistake on the previous turn."

In came Anurid Brushhopper to replace the lost army and Barbero played his own great creature: Psychatog. They bumped into each other once but the Brushhopper ran away. Jose played another Fact or Fiction getting a second Psychatog.

Brown-Santirso tried Flametongue Kavu but Barbero had the Counterspell. The Psychatog was nibbling away but Julian was still at twenty - remember the Cloak. To speed things up he played another two Psychatogs.

Meanwhile Julian's Brushhopper had brought Barbero down to seven and since the Psychatogs wouldn't allow him to attack he changed plans with Grim Lavamancer. But Jose Barbero had Cunning Wish and sideboard tech: Psychotic Haze.

The Brushhopper jumped in front of one Psychatog and Julian needed help. He got just that in the almost perfect shape of Phantom Centaur. But Barbero had the seventh land and flashbacked an Edict. Like gazillions of times before Psychatog ruled the table in the last few turns.

Julian: "Not playing the Birds before the two Edicts was a big mistake."
Jose: "I could deal with the Cloaked Barbarian." 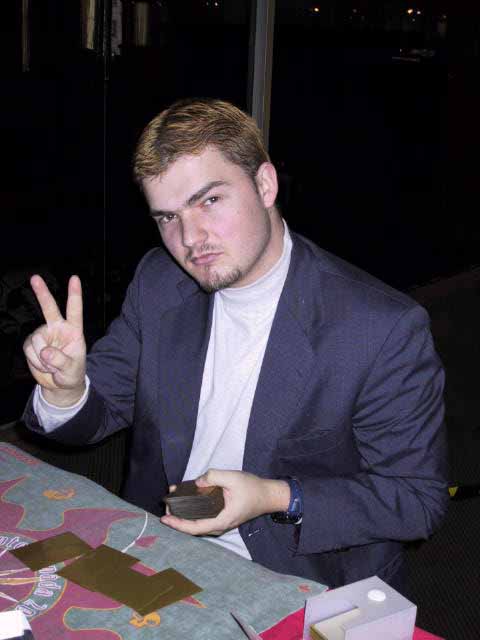 New Zealand´s vice-champion: Julian Brown-Santirso.Julian again tried second turn Wild Mongrel but this time Barbero had the Force Spike for it. Yet he could do nothing to stop the third turn Anurid Brushhopper. He was in further trouble when he missed his third land drop.

He Ghastly Demised a Birds and try to take Brushhopper with Edict but Brown-Santirso hid it. On the next turn things got even worse: a second Anurid Brushhopper showed up. Two draws, and zero lands, later Jose Barbero conceded.

Sylvan Safekeeper showed up on turn two but Chainer's Edict immediately took it away.

Brown-Santirso tried Grim Lavamancer next at it stuck around. Next he tried Living Wish and smiled when Barbero allowed it. He gleefully went over his sideboard before picking Genesis. Another Safekeeper came into play but not before Repulse took Lavamancer away.

That cleared the path for another Edict, taking away the Safekeeper. The Lavamancer returned, this time with Armadillo Cloak. The Cloak didn't make it because Barbero took the opportunity to play Force Spike.

A second Wish got Nantuko Monastery into play. The New Zealander tried another Cloak and the best Barbero could do was Wish for Fact or Fiction. Barbero untapped and played Psychatog. 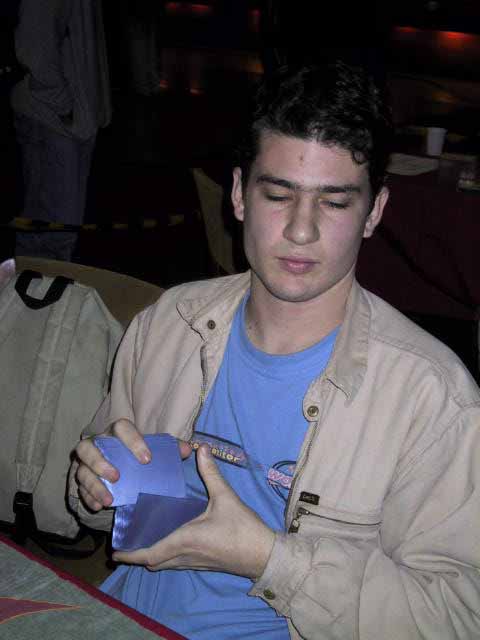 The game was so slow Jose Barbero was falling asleep.Flametongue Kavu targeted Psychatog and the Lavamancer finished the job. With the golden menace out of the way Genesis brought Barbero down to fourteen. Another Fact or Fiction gave Jose a few more options.

Ghastly Demise ate up the Kavu and after spending a long time thinking about it Jose Barbero played his third Psychatog. Another Demise killed the Grim Lavamancer and Genesis got Repulsed.

With a sigh, and another look at the clock, Julian replayed the Genesis. On the next swing the Psychatog killed it. Eventually, at his slow pace, Jose Barbero got to the "Upheaval, replay Psychatog" part.

Since he only had a few cards in his graveyard he couldn't finish the game right away. So they went through the motions, with the last few seconds fading in the clock. When we reached the extra turns the best Julian could do was play chump-blockers.

On the last possible turn Julian Brown-Santirso ran out of blockers and Barbero had enough counters to stop any attempts to play another creature.