Coming into the game both players were on 7-2 records with the winner getting the opportunity to ID their way into a top 8 birth. The matchup was Allen’s r/g beatdown vs Smith’s u/g Opposition splashing white for Worship, a card that Allen would find very hard to deal with especially in the opening game.

Smith wins the die roll and elects to play first, opening up game one with a Brushland and a Bird of Paradise. Allen brings down a Wooded Foothills and sacrifices it for a Forest, playing out a Basking Rootwalla. Smith builds his mana base bringing down a Llanowar Elf and then a Merlfok Looter. Rootwalla comes in to say hi and Allen summons Grim Lavamancer.

Smith loots away discarding an Adakar Waste and summons a Squirrel Nest on his lone Island. Call of the Herd comes out for Allen and he sends the turn across, with Smith making a Squirrel token at the end of the turn. He then loots again and casts a Call of the Herd of his own. Allen casts a Phantom Centaur, which is practically useless against an active Squirrel Nest, and passes the turn. Merfolk Looter finally turns up the goods, and Smith casts Worship, prompting Allen to scoop up his cards and head to the next game. 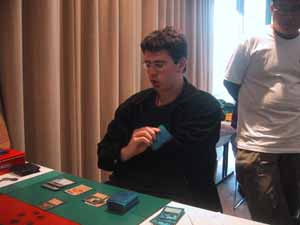 The two chatted about the opening game with Allen stating that Smith “Had a great draw.” “Yeah it wasn’t bad” admitted Smith, “Yours seemed to lack a bit of burn though, I didn’t expect that Merfolk Looter to last a turn.”

Smith starts off with a first turn Llanowar Elf which is sent straight to the graveyard with Firebolt. A second turn Merfolk Looter meets the same fate, and Allen backs up his burn with a Wild Mongrel. Smith has another Looter and brings it into play while Allen is content to strap the Elephant Guide pants onto the Mongrel and sends it swinging into the red zone dealing 5 points of damage. Smith loots away again, summoning a Ravenous Baloth.

In comes the Mongrel and after some thought Smith decides not to block, taking five damage. Allen’s third firebolt of the game deals with the looter before it gets to dig too deep into the deck, and Allen sacs off a Foothills to cast a Call of the Herd. Squirrel Nest from Smith looks like he’s found a way of dealing with the Elephant Guided Mongrel. The call and the Mongrel come into the red zone and when Smith tries to make a Squirrel to block Allen pitches Violent Eruption and kills the squirrel, dealing one damage to the Baloth and two to Smith.

The Baloth jumps infront of the Call token and with damage on the stack it is sacrificed for life taking him back up to 9. The Mongrel and the Squirrel Nest crash heads again the turn after with Allen dumping his hand out after combat, summoning a Wild Mongrel and a Llanowar Elf. After peeking at his next card and seeing yet more land Smith scoops em up and the two headed to game 3. 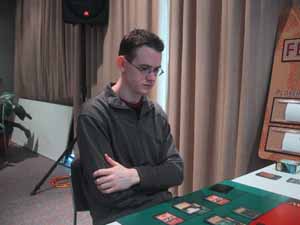 Allen begins the deciding game with a mulligan and Smith starts off with a turn one Bird and a turn two Squirrel Nest. Allen plays out a turn two Mongrel and Smith drops down an opposition tapping down a mountain and a forest in Allens upkeep, trapping him short on mana. A squirrel taps down the Wild Mongrel in the attack phase and Allen uses his two available mana to cast Volcanic Hammer on the Bird. Smith continues to put Allen in a world of hurt, casting Worship. Once again Smith taps down Allens land leaving him with a lone Mossfire Valley but Allen summons a Grim Lavamancer off a Karplusan Forest. The Mongrel attacks for two and Smith simply plays out call of the Herd.

More upkeep antics from both players result in the Lavamancer killing off a squirrel and during his main phase Allen casts Volcanic Hammer on the call token, sending his Mongrel into the red zone. Despite his land being constantly tapped Allen is making a game of it, Naturalising the nest. Realising that he would have to start going on the offensive Smith sends in the Call token for an attack. Lavamancer shoots down the Bird of Paradise during the tapping phase and Mongrel charges in. Smith decides to lock down Allen again but this time Allen draws a land and casts Volcanic Hammer on the call token. The two then pass turns for a while tapping down land and the Mongrel, with neither player playing any spells. Allen finally sends in a Lavamacer for an attack and Smith responds by tapping down the mongrel, Allen plays volcanic Erruption via madness and sprays out all the Squirrel tokens. It’s the last play of the game and Smith scoops up his cards.