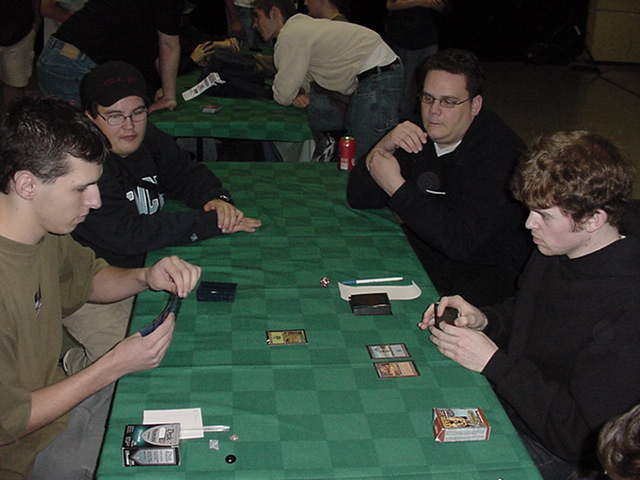 This round all the other matches determining the top 8 were only draws. The only people who may have played were Dustin Stern and Bob Maher. Since they were friends from the same city and it benefited them both they were happy with the draw. Dustin now is back on the gravy train with his 2 points for top 16 and Maher gets back on the Masters with a top 8. The top 8 at this time is:

Dan is a strong player from Kansas City. He has been traveling to the GP this year and just finished second in the invitational in Cape Town last weekend. Yannick is a local Quebecois and has achieved some moderate success at the PTQ level. 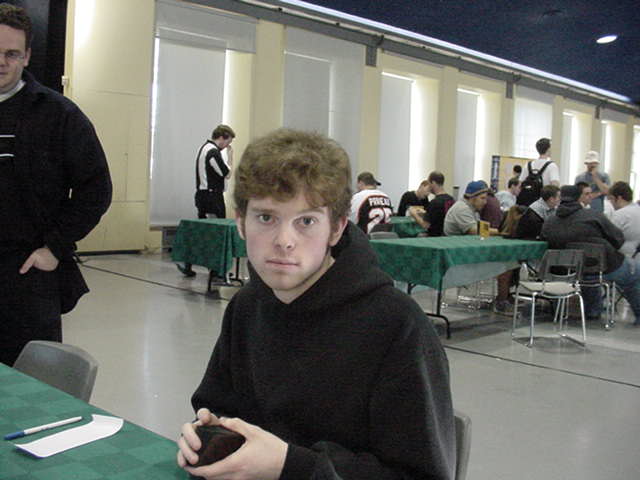 Clegg leads with Nomad Decoy on turn three and Yannicks turn three play is Patchwork Gnomes. Dan misses his fourth land drop but plays a Pilgrim of Virtue. Yannick plays a Phantom Whelp and is done. Dan Peeks and sees the following hand: Aven Windreader, Refresh, Metamorphic Wurm, 2 Krosan Archers, and a Beast Attack. Dan again misses the land drop and passes the turn. Yannick plays out an Archer and is done, also missing a land drop. Clegg draws a land and plays out Luminous Guardian on his turn six. Yannick takes some time to do nothing on his turn and is done. Dan passes the turn and has Repel, Nomad, and Aether Burst mana up. Yannick draws his fifth land allowing him to cast the Beast Attack and Wurm in his hand. Dan doesn't draw a land for the Fervent Denial in his hand and again passes the turn. Yannick makes a beast token and which is promptly bounced. The Windereader comes in and Clegg needs to find some offense or answers soon or he will be overwhelmed. He does get out a Pulsating Illusion which will serve as a strong blocker or attacker since there is no fear of it being killed in response to activation from Yannick's UG deck. The Windreader gets Kirtar's Desired. Yannick makes a poor attack that costs him a Refresh and the need to recast the Whelp for only 4 damage when Clegg is at 20. The first game is still going despite being 25 minutes into the round. At the 30-minute mark Yannick is still trying to win by swarming over Clegg's army of Aven Flock, Pulsating Illusion, Pilgrim of Justice, Nomad Decoy, and Luminous Guardian. At this point Yannick is taking very long turns and not really playing at much of a pace. 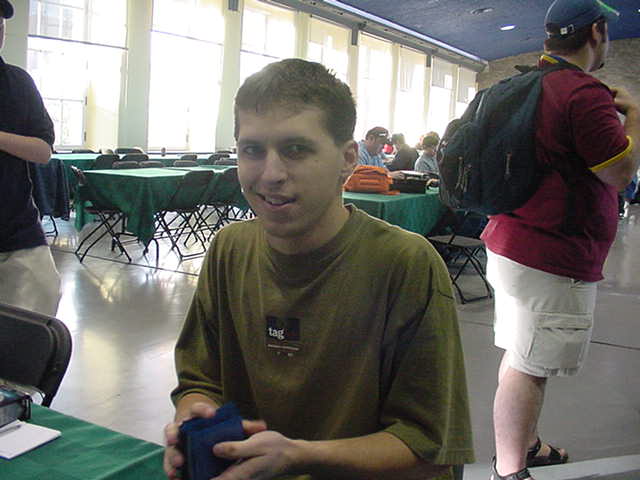 Clegg calls a judge and is lucky to receive Matt Vilamano. Five minutes have passed and only a couple turns. Clegg has Yannick locked out of the win barring some good bounce spells or Deluge. Dan has drawn a Psionic Gift that gives him a chance to deal some damage while still playing defense in the match. The board is very locked up with a Nomad Decoy and a couple walls that Yannick can't get through. Yannick used Aven Windreader to reveal that Clegg has a Chainflinger on top of his deck. The Chainflinger is huge because it can remove some threats and is a path to victory for him. By the time Clegg cast the Chainflinger there is only 11 minutes left in the round. There is no way this game won't decide the match. Clegg seems to have the game barring any bombs that Yannick may have. I asked a judge for the decklist but they have lost it. Clegg has now drawn a Syncopate and can't lose this game barring error. Now that Clegg is in firm control of the game his pace has come back to his normal thoughtful pace. Clegg surprises Yannick with the fact that Cephalid Looter targets a player and Clegg decks Yannick with about one minute left on the clock.