This is the big one. The winner here is probably a lock for the Top 8 (at worst has to wait for tiebreaker lottery).

This is one as quick and bloody. It basically revolved around Luis Massaro, despite being in contention for the Top 8, arriving late. So Mikey kept shuffling... and waiting... 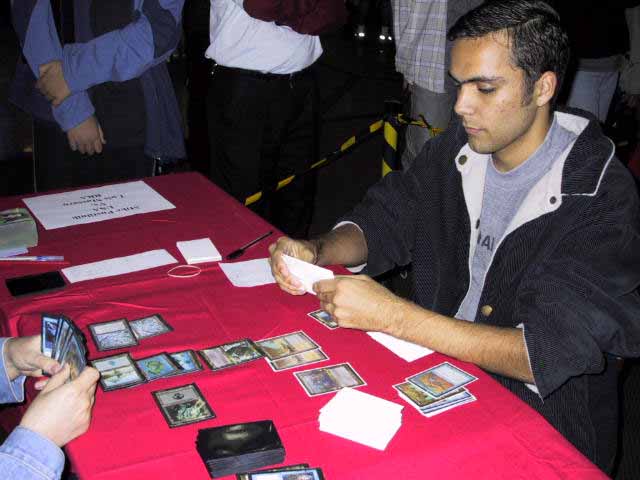 Massaro trying to fight back from a game loss.Massaro showed up a minute late but somehow rewarded when Pustilnik was forced to mulligan a six-land hand. The next hand had no lands. On turn three he tried Psychatog but Massaro had Absorb.

By now the table showed Blue and Black sources on Mikey's side and Red, White and Blue sources on Massaro's side. Thus the decktypes were very obvious. Massaro played Meddling Mage, naming Repulse, and started swinging with it.

Meanwhile Pustilnik was missing land drops, locked at three, but was still fighting. He used Aether Burst on the Mage and again tried Psychatog, tapping out. This time Massaro allowed it because he had Wrath in hand.

Out went Psychatog but Mikey finally found his fourth mana source. The Mage returned again chanting its despise for Repulse. A second one joined him later on, locking out Aether Burst.

Mikey found a way out of that by using Cunning Wish to get Execute. But before using it he tried another Psychatog. Massaro delayed the trouble with Memory Lapse before using Counterspell on the next turn.

Luis countered the Execute and used a Fire/Ice to finish the job the Mages had been doing for the last turns. 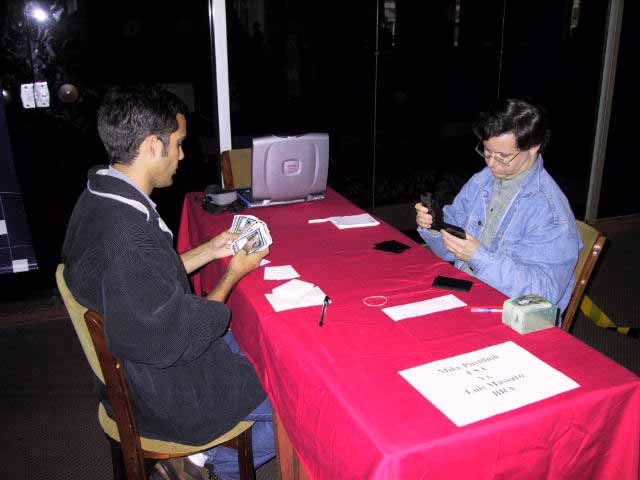 The sideboarding for the final game.It was Luis' turn to take a mulligan: he had seven lands in his initial hand. His second one was a lot better and they got the decisive game of their Grand Prix (at least before the Top 8) underway.

Again Mikey tried to sneak Psychatog through on the third turn but Massaro had Counterspell. He tried again on his fifth turn and this time it resolved only to be Repulsed at the end of turn.

The sixth turn was a repeat of the fifth: Psychatog meets Repulse. On the third try the bewildered Psychatog met Absorb, which met Gainsay. It looked like this time it would stick around but Massaro had ANOTHER Repulse.

He finally got tired of the bouncing game and played his own creature: Meddling Mage, naming Upheaval. To close thing up he had Goblin Trenches. Finally Pustilnik got his Psychatog to stay on the table.

But it could be too late. He knew he would never punch through on the ground so he tried Possessed Aven. Luis Massaro tried to dig for answers with Fact or Fiction but Pustilnik countered that.

The American probably breathed a sigh of relief when the Brazilian created two Goblins. It meant he didn't have Wrath right now. He Repulsed a Goblin and Luis Massaro went berserk: he created eight goblins.

The brutal swing brought Pustilnik down to eleven. He agonized during his turn but eventually passed without making a play. Massaro made four more tokens and sent everyone in. This brought Mikey down to two.

Pustilnik discarded three cards, through Psychatog, to reach Threshold and used his Aven to nuke the Pikula. This gave him the chance to play Upheaval. He left two mana open to replay the Psychatog but Luis Massaro showed him Absorb.

Mikey shrugged, smiled and extended his hand wishing his opponent good luck in the Top 8.