Cheers from the audience could be heard as two local favorites were paired in this round three feature match: Cory Ferguson and Noah Weil. Cory was playing "The Solution" versus Noah's "Liquid Tempo" variant. 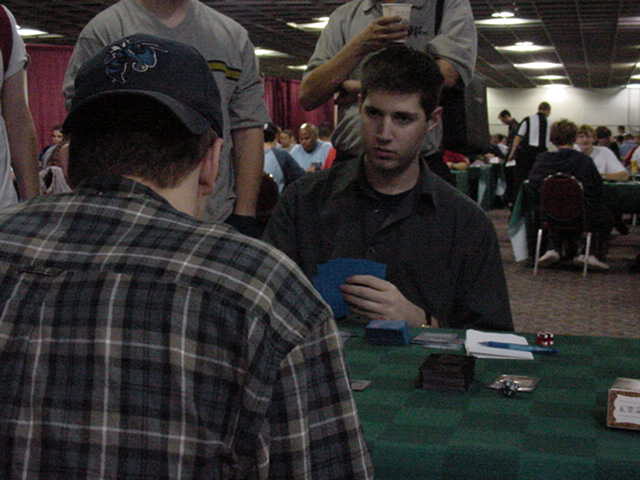 Cory kept his opening hand and proceeded to drop two consecutive taplands and Dromar's Cavern to open the game. Cory's third turn Spectral Lynx was Repulsed during Noah's next main phase, slowing him down ever further. Noah was in a precarious position by the fifth turn. Cory had managed to get out a Meddling Mage and two Spectral Lynx's to Noah's Blurred Mongoose; furthermore, Noah had all four of his Shivan Reefs on the table dealing him damage. Noah, with his back against the wall, dropped an uncontested Prophetic Bolt on one of the Lynx's and began to try to stabilize his position. When Cory decided to start ramming through the creature stalemate, he had the upper hand in combat tricks by Repulsing his Meddling Mage. The next turn, Cory managed to lay another pair of creatures and continue the tempo he had established from his early game 3:1 creature advantage. Even though Noah was actually gaining board advantage with his untargetable Mongoose and his kicked Titan, Cory had the pro-green bear to finish him off before the tide turned.

Noah did get the chance to show off his maindeck Gainsays during the game, but the truth remained that they only surprised his opponent and didn't help in stealing the tempo he had already lost. 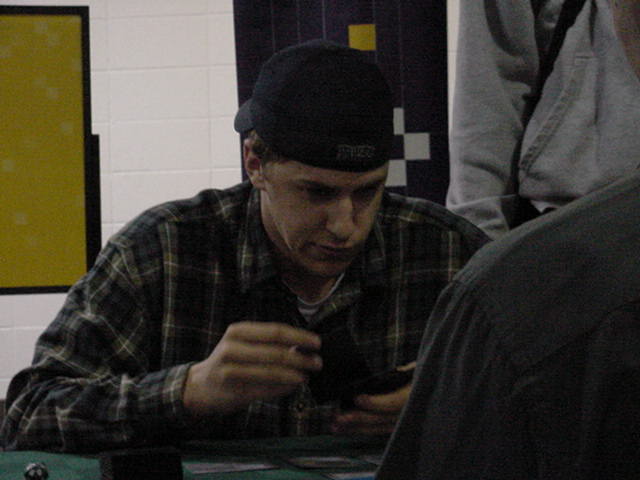 To show that losing the first game hadn't dampened his spirits, Noah pointed out that he had won the GP door prize, effectively getting something for doing nothing. Oh the marvels of the Grand Prix!

Game 2 started off uneventful as the only action in the first five turns of the game was a countered Fact or Fiction from Noah. Noah dropped a pair of Gaea's Skyfolk to get the action started, but the second one was Slayed before it had the chance to deal damage. Over the course of the next few turns, Cory dropped a Stormscape Apprentice and a Spectral Lynx that were delayed with a kicked Rushing River. However, Noah was unable to gain a tempo advantage because his last Gaea's Skyfolk was Slayed off the table. With Jilt and Flametongue in hand, Noah had no answer for Cory's newly resolved Spectral Lynx. Cory resolved a Fact or Fiction to add to the card advantage he had already gained from his pair of Slays, and began to run away with the game with his massive advantage and cards. Noah tried to mount a comeback, but Cory simply flashed enough counters to stop each of Noah's spells twice, ending the match.