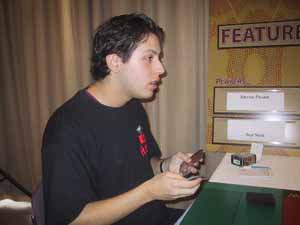 Puszet leads off game one with a Wretched Anurid, which is met with an Elvish Warrior. Puszet elects not to attack with his Anurid and simply casts a morph creature. Seck plays out his Timberwatch elf and passes the turn, with Puszet deciding its time to go into the red zone sending in the Anurid, summoning a Sparksmith and a Goblin Turncoat after the attack. Secks sends in the Elvish warrior and plays out a morph creature. The constant summoning is hurting Puszet with his life total sitting on 12 and Secks on 17. Anurid, the morph and the Turncoat come in to the red zone and the morph of Seck jumps infront of the moprh of Puszet. Seck flips up a Branchsnap Lorian before damage is on the stack. Puszet hits it with the Sparksmith and Seck uses Timberwatch Elf in response. Puszet flips over Unstable Hulk and the Sparksmith wipes out the Lorian. With the two extra turns Seck simply summons a Berserk Murlodont, sends in the Warrior and pumps it with the Timberwatch and Puszet is forced to scoop as the extra turn from the Hulk would render him dead.

Puszet got the game rolling with a turn 2 Goblin Turncoat and Seck matched it with a turn 2 Stonewood Invoker. Missing his third land drop, Puszet still had a play putting down Wretched Anurid. Seck played out a Branchsnap Lorian and passed the turn back. Puszet sent in his Goblin and it traded with the invoker but Seck continued to power up his team, dropping down a Snarling Undorak and sending his Branchsnap into the red zone. It traded with the Anurid and dealt one point of trample damage. Puszet then untapped and cast a Screeching Buzzard, having hit lands on the last two draw steps, and when Seck attacked on his next turn he declined to block taking 3. 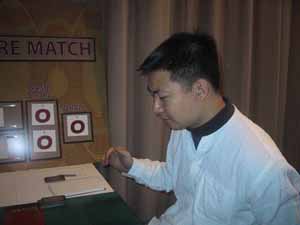 Seck continued to develop his board with Totem Speaker. Puszet sent in the Buzzard and passed the turn back, developing an air force with Sootfeather Flock. Seck cast Berzerk Merlodant and sent the Undorak and the Speaker into the red zone. Sootfeather traded with the Totem Speaker and on his turn Puszet cast Crested Craghorn and provoked the Undorak, trading the two off in combat. Seck attacked back with the Murlodant and summoned a Gempalm Strider.

Cabal Archon and a morph creature were summoned by Puszet and he sent the Buzzard into the red zone. Murlodont and the Gempalm come counter attacking back with the Gempalm trading off with the Cabal Archon, with Puszet flinging it to Secks dome for 2. The morph and the Buzzard come in and when Seck attacks back and attempts to Primal Boost, the morph is flipped over revealing a Skinthinner. Seck has no more plays and is forced to scoop as he’s beaten down with the Buzzard and the Skinthinner. 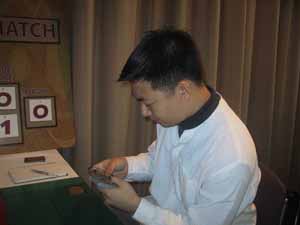 Puszet gets the game underway with a turn 2 Anurid and Seck makes his first play of a morph on turn 3 despite going first with numerous 2 drops. Puszet sends the Anurid into the red zone and brings out a morph of his own, which he refuses to trade when Seck attacks. Seck plays out another morph and sends the turn back to Puszet, with the Anurid and the morph swing in for 5 damage and Puszet brings out Doomed Necromancer. Seck counter-attacks with his two morphs and Puszet takes the damage, with a Barkhide Mauler summoned after combat. Puszet thinks for a long time before passing the turn back with no play, the life scores are set at 9-12 in Seck’s favour. When Seck casts Totem Speaker things look like they might be getting a little out of hand but Puszet plays an end of phase swat on one of the morphs, killing a Spitting Gourna. Puszet then opts to send his men into the red zone with Anurid and the morph coming in. Mauler blocks the Marauder and it flips over killing it off and swat takes out the last morph leaving Seck with only a totem speaker. He then fixes that little situation dropping down an Elvish Warrior and a Timberwatch Elf. Totem speaker comes slapping in for 3 damage.

Anurid goes chagrining in but it is chumped blocked by the warrior. Puszet brings out a morph and flips over an Aphetto Exterminator, killing off the Timberwatch Elf. Seck brings out an Elvish Warrior and drops Puszet down to 1 life due to the Wretched Anurid. Exterminator attacks and is blocked by the Elvish Warrior. Seck casts an Invoker and ends the game via anurid.