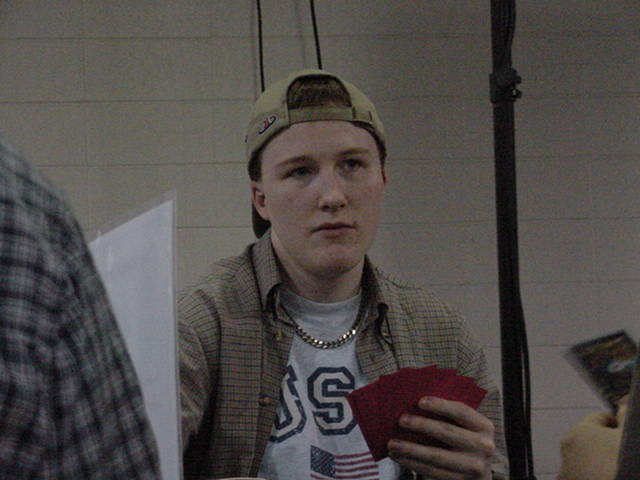 The two players are in for a mirror match. Both are playing the colors of an American flag, with some occasional strange cards main deck (as will become apparent in this report). Whereas Wescoe has played in a number of Pro Tours and is generally credited as the designer of a deck Brian Davis used to earn a 2nd place finish in PT Chicago, his opponent is a newcomer to serious tournament competition. Del Barrio was surprised that there is live tournament coverage of this event. "I did not realize Grand Prix were this big. I thought it was pretty much like a PTQ," he said.

Del Barrio opened with Sunscape Familiar in the first game. Wescoe removed it with Urza's Rage but would not be able to do the same later in the game - Del Barrio cast Lashknife Barrier and then summoned another Familiar. Wescoe summoned a Meddling Mage, preventing his opponent from casting Absorb. It seems Del Barrio was not concerned with the Mage. He cast Prophetic Bolt at Wescoe, rather than to kill his creature. He then summoned Lightning Angel getting far ahead of Wescoe in the damage race.

Wescoe's Fact or Fiction provided him with Galina's Knight, Goblin Trenches and an extra land. He used Jilt to buy a little bit of tempo, returning Lightning Angel to the opponent's hand. Paying kicker did not make sense and probably never would during this game, due to Lashknife Barrier. He summoned another "Bear" - a Galina's Knight, and made two Goblin Soldier tokens, trying to master up some offense. 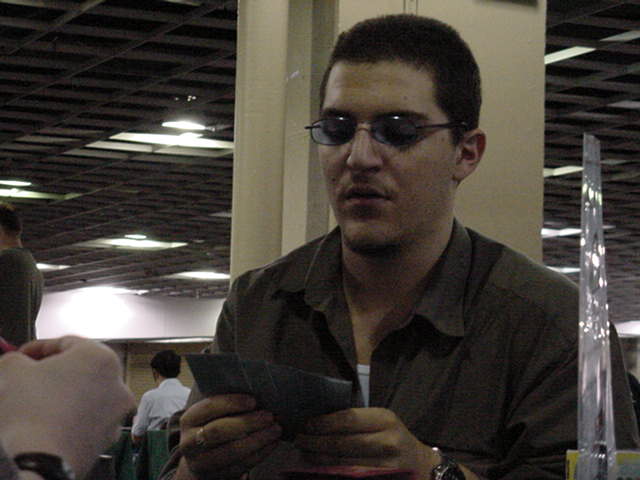 Wescoe used another Jilt at the end of the following turn. In response, Del Barrio cast Repulse on Wescoe's Meddling Mage so he could cast Absorb, then tried to Absorb the Jilt. He forgot that Repulse costs three mana. As a result, he tapped out for Absorb but still had a mana floating. Wescoe Disrupted the Absorb. "Are you gonna pay?" He asked. "What? No." Was his opponent's response. Wescoe got a Disrupt through, and Del Barrio was reminded that he had one mana floating at the end of turn, so he was forced to mana burn on top of everything else.

Both players deserve a bit of credit here. Wescoe gave his opponent every chance to realize that he had mana to pay for the Disrupt whereas most players would phrase their question differently. For example, if I were in his shoes, I would simply ask: "Resolves?". Del Barrio, although he made a potentially game-altering mistake, took it in stride, did not complain, and simply concentrated on his game over the coming turns. The mistake did cost him though - Wescoe was able to squeeze enough creature damage through over the next several turns to finish the game with Urza's Rage.

Wescoe was the aggressor early in the second game. He summoned a Galina's Knight and a Goblin Legionnaire, but his fun was over very quickly - Powerstone Minefield entered play and the Knight was Repulsed. Del Barrio then summoned a Lightning Angel, to race Galina's Knight which was able to attack due to its pro-red ability. Wescoe would have been able to use Goblin Legionnaire in combination with the Powerstone Minefield ability to kill the Angel, but Del Barrio played a Lashknife Barrier before attacking. Wescoe was forced to Ice the Angel instead to save himself three points of life. 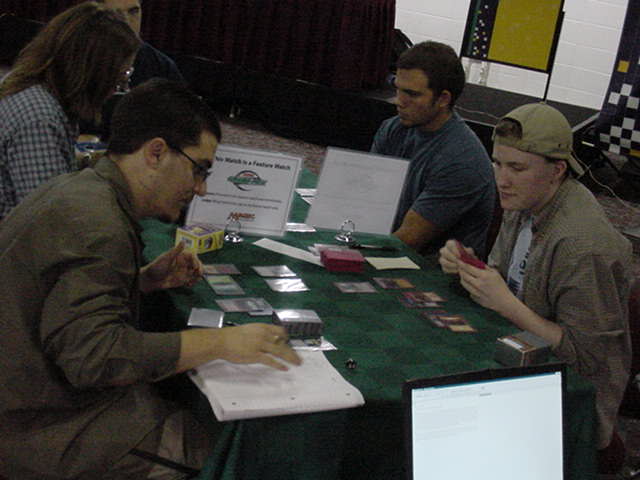 It was Wescoe's turn to make a mistake. Del Barrio cast a Galina's Knight of his own, and Wescoe attacked into it despite there being a Lashknife Barrier in play. Now unable to remove the Angel easily, Wescoe chose to Prophetic Bolt his opponent instead, keeping the damage race fairly even. He attempted to Bolt again on the following turn, but did not have a counter to back it up, so Del Barrio gained three life instead, via Absorb. He also Absorbed an Aura Blast, preventing Wescoe from having any way to make a comeback. The two players would have fifteen minutes to play their third game.

Wescoe kept a very questionable hand of six lands and a Meddling Mage. Del Barrio on the other hand drew only one land and took a mulligan. Wescoe cast Meddling Mage naming Sunscape Familiar. His opponent played a pair of pain lands and took two damage to summon Goblin Legionnaire.

Able to draw no lands other than the three Battlefield Forges, Del Barrio watched helplessly, as Wescoe cast spell after powerful spell. Wescoe resolved Fact or Fiction, picking up a Prophetic Bolt off of it, cast Goblin Trenches and used Aura Blast to remove Powerstone Minefield that Del Barrio played once he actually drew a fourth land. Down to one life point, Del Barrio did not have an out. He was forced to tap out for another Powerstone Minefield, leaving it up to Wescoe whether to win via another Aura Blast, or just burn his opponent out.