David is fresh off his GP win in Minneapolis two weeks ago. He is in the 9-2 bracket with a shot at top 8 with a win here. His opponent is David Rood a local amateur. He won a trial and is looking to qualify for his first Pro Tour. David is the best limited player here in Quebec and Humpherys may be the best play in Boston. The crowd has gathered for the first time in the feature match area with the local Rood being a favorite. 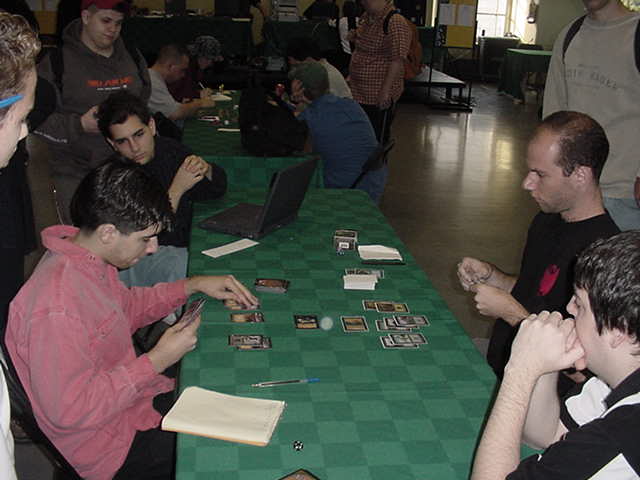 Both players start out slowly laying lands for the first few turns. Rood lays a turn 3 Hallowed Healer and is done. The Hump plays an Archer on his fourth turn. Rood then misses a land drop and casts Afflict for the cantrip effect. Rood draws a fourth land on turn five and casts Blessed Orator and The Hump Fervent Denials it. The next turn Rood Gravediggers the Orator and The Hump Repels the Healer. The Hump lays a seventh land for the Denial and serves with the Archer. The Healer is countered and The Hump is back serving with the Archer. A Leaf Dancer comes out for the Hump and Orator comes out for Rood. The ground is pretty locked up right now and the Hump is in good position. The Hump's board goes down the toilet when a Dwarven Bomb Squad hits play for Rood. He got it very late in the draft and is splashing it in his WB deck. The Hump has no way to kill the Squad so his chances of winning are not looking good. The Hump shakes his head and sighs a little, he won't give up but this match is close to done. The Squad goes all the way and The Hump is left with no creatures. 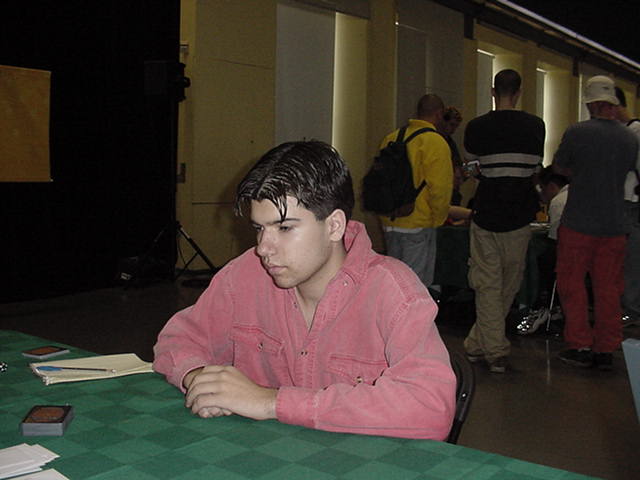 Rood starts off with Dusk Imp and the Hump plays a Springing Tiger, which is Afflicted. Rood apparently doesn't like to gain card advantage off of that spell and is content to just cycle it. Rood then uncaps and plays a Zombie Assassin. The Hump makes a token at the end of the turn and sends with the token and Tiger. The Tiger trades with the Assassin. The Hump then plays a Broken Broker, which is promptly Demised. The Assassin is then Zombified. The elephant token gets Seton's Desired then comes over to get his beat on once more. The Assassin is then Repelled and replayed on Rood's next turn. The elephant then trades with both the Assassin and the Dusk Imp, which doesn't seem like the most ideal play but prevents more damage from being taken. Rood then Anarchists the Zombify. The Hump casts a second Elephant Ambush and lays out an eighth land to flashback the two now in his graveyard. Rood is in very bad shape here but drops Master Apothecary and another Dusk Imp. The Hump Elephant Ambushes for the third time at the end of the turn and then takes a moment to think. One can tell when the Hump is thinking because he thinks with his whole body. He moves his head and chest around. He scratches his neck, breathes heavy, and then passes the turn. They each draw and pass the turn until the Hump draws Careful Study, a huge card in standstill situations where the Hump can potentially draw Deluge for the win. Rood alpha's and is apparently planning on wrathing this turn, not for card advantage or with threshold though. Rood then cast Zombify on an Anarchist returning the Zombify and playing a Dusk Imp. Things don't look very good for the Hump as he has no creatures and his opponent has many. The Hump is now down four creatures to none and can't really win at this point. 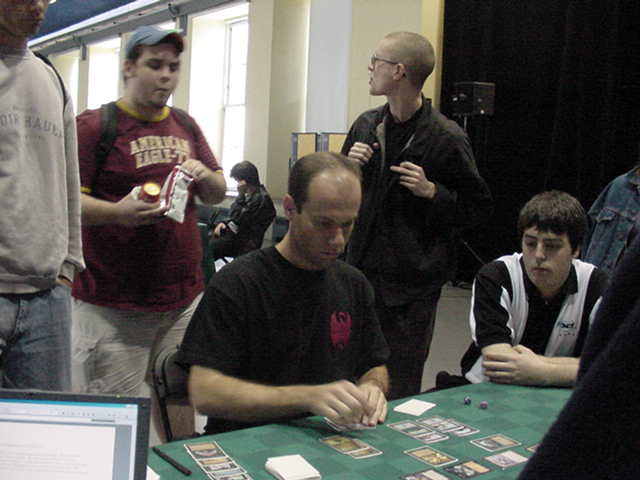 Dave was mana flooded both games and both his Careful Studies only yielded more lands. Rood kept some hands with shaky mana (2 lands while playing) but it worked out.