These two competitors are facing off in the round twelve death match, with the winner getting a shot at the top 8. They had met before at worlds in an OBC tournament with Russell’s mono black block deck losing to Musolinos u/g threshold deck thanks to Bearscape. Russell was hoping that he could even up the match score vs Musolino while Musolino was hoping he could extend his undefeated run. 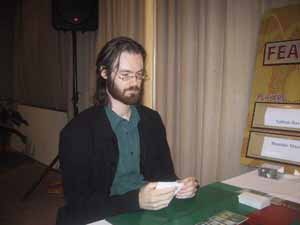 Musolino was once again playing u/g but this time it was the madness variety and he led out the game with a Wild Mongrel and an Aquamoeba, which was Memory Lapsed by Russell. The Mongrel thumped in for 2 damage dropping Russell down to 16 life, and the Aquamoeba made its triumphant return to play. Russell cycled off Renewed Faith and dropped down Compulsion passing the turn across. Musolino attacks with the two creatures and then pumps the Moeba, discarding Deep Analysis and at the end of the turn Russell cycles off a Counterspell using Compulsion. He draws and passes the turn back to Musolino who casts Quiet Speculation, getting Roar of the Wurm, Roar of the Wurm, Deep Analysis and then sends his two men into the zone, pitching a Wonder to the Moeba to deal some extra damage, but its met by Moments Peace.

Once again Russell chooses to do nothing on his turn, passing the turn back allowing Musolino to flash back his Deep Analysis and attack with the two men again, pitching an Island this time to deal 5. Russell Compulses away a Forest and then sacrifices the Compulsion to draw another card. Musolino attacks again and forces Russell to flash back the Moments Peace, summoning a Roar of the Wurm after combat with two islands left untapped. Russell attempted to cast a Mirari’s Wake but it was met with a Circular Logic, and when Musolino attacked back with his men Russell could only pray that he didn’t have a second Logic for the Moments Peace he cast. Musolino did and the two shuffled up for the next game.

Musolino was fast out of the blocks with a turn one Basking Rootwalla and a turn 2 Wild Mongrel. Russell cycled away a Renewed Faith and played a Krosan Verge passing the turn back to Musolino. Rootwalla and Mongrel enter the red zone with no pumping and after returning to his main phase Musolino casts a Careful Study, pitching a Gigapede and an Island. Russell sits back and does nothing during his turn, like a good control player should, whilst Musolino comes crashing in again, this time pumping up the Rootwalla. Russell finally plays his first spell, dropping down Compulsion and Musolino sets about drawing cards too leaving one island open in his main phase to cast Deep Analysis. His attack phase meets up with Moments Peace and he sends the turn back across to Russell who draws and passes the turn straight back. The Mongrel and the Rootwalla once again enter the red zone and this time they get through. 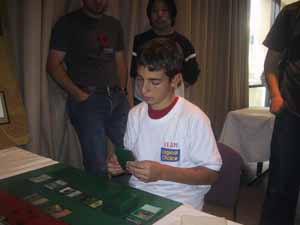 Musolino flashes back Deep Analysis and sends the turn to Russell, who seizes the chance to activate compulsion twice. When Musolinos creatures come in for the attack they’re met with the flashed back Moments Peace, which is returned from the removed from the game pile via Cunning Wish. Russell casts Analysis and passes back across with Musolino pitching analysis to the Mongrel and then flashing it back pitching cards to make the attack worth 10 damage, Russell tries to fog twice with Moments Peace but they were both met with Circular Logics.