Before the match West joked with Haddy that it was possible Haddy could go busty with a 5th turn Visara with the cards he managed to get in the draft to which Haddy calmly replied “I can get it turn 4 ya know?” West thought for a second and replied “Oh yeah, and in a few different ways as well!” There’s no doubt that’s one of the most disgusting things that a player could stare at after turn 4 of a draft game, and West is hoping that he isn’t going to be one of those men. 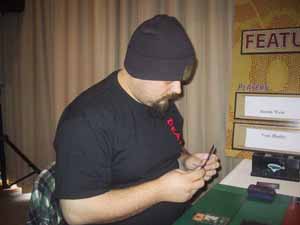 West started off game 1 with a mulligan, and with his second hand up to scratch the two began the match. Haddy lead off with a turn 2 Wretched Anurid, sending it in attack the turn after. He played down a Wooded Foothills and then sacrificed it for a Mountain, having played three different colour lands over the first three turns he calls out “Puszet”, a term used in Melbourne to describe that maneuver. Haddy then played out a morph, taking one damage from the Anurid and sent the turn back across to West. A morph of his own was West’s reply, dealing one through the Anurid and he sent the turn back. Haddy crushed his creatures into the red zone and West thought for a while before allowing it through, taking five damage to the dome. Haddy then tapped out to cast Explosive Vegetation, netting him a Forest and a Swamp, giving him the mana base to cast his splashed Visara.

West sent his creature into the red zone and played out Flamewave Invoker, sending back the turn. The Anurid and the morph came into the red zone and once again West carefully considers his options. He put the Flamewave Invoker in front of the morph creature and Haddy flipped it over to reveal an Undorak, keeping it alive and killing the Invoker. West had no play on his turn leaving his 5 mana open and an untapped morph. Haddy sent in the Anurid and the Undorak only to find himself facing a Venomspout Barackus. The Undorak double pumped itself, trading off with the large monster and the Anurid dealt 3 damage, dropping West down to a measly 6 life.

West summoned a Skirk Outrider and an Elvish Warrior, but the Anurid was relentless crashing in and forcing a double block to killing it off, taking down the Warrior. Haddy played out Wirewood Savage and ended his turn. Sharpshooter came down for West, while Haddy simply plays out Krosan Tusker, drawing himself a card with the Savage. With only two cards in hand things are really looking grim for West facing down a card drawing engine like Savage and a large style monster in Tusker. He sends the turn back to Haddy who is more than happy to send his Tusker screeching in for an attack. Vitality charm from West makes a man who steps infront of the tusker, only to find it has trample from a Vitality Charm on the other side of the table and the two shuffle up for game 2

As the two began shuffling up for game 2 West explained that he played around the charm the entire game, and then figured that in the end Haddy didn’t have it. “Did you rip it?”, he inquired. “No” replied Haddy, “I had it the whole game”.

Both players keep their hand in this game, with West cycling a Tranquil Thicket on his first turn. He followed it up with a turn two Taunting Elf, not the most optimal move his deck can make. Haddy responded with a Goblin Turncoat and sent the turn back to West, playing down, a Flamewave Invoker. The two players then played out morphs over their next two turns with neither player taking the initiative of going into the red zone. Haddy played out a Wirewood Channeler, once again giving him access to all the colours of the mana rainbow. West played out an Elvish Warrior but still no player has opted to send anyone from their team into the red zone. Haddy continued to expand his resources, thinning his deck with Explosive vegetation, netting him a swamp and a forest. 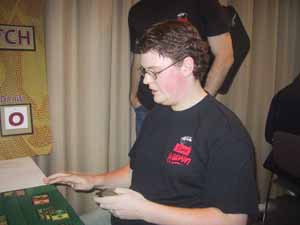 Haddy then used the Channeler to play out a morph and cycle his Tranquil Thicket passing the turn back across to West. West then comes crunching into the red zone, sending in the Invoker, the morph and the Warrior. Turncoat blocked the Flamewave Invoker and West flips over RockShard Elemental, dealing 10 damage to Haddy. With the Warrior, the Elemental and the Taunting Elf alive West has a chance of winning the game on his next turn, thanks to the double strike, provided of course that Haddy has no way to deal with the Tanting Elf.

Haddy drops down Wooded Foothills and sacrifices it for a mountain casting a Symbiotic Elf. When West attempts to attack for lethal damage one of the morphs flip over, revealing a Skirk Marauder, killing the elf. The Channeler and a Symbiotic Elf then block the warrior, causing the Channeler to die, with the Marauder diving in front of the Elemental. West then summons an Outrider and passes the turn back. Haddy sends in the morph and flips over a Sootfeather flock, dealing west 3 damage and passes the turn. Skirk Outrider and the Elemental come in to the red zone with the Symbiotic Elf jumping in front of the Elemental. Sootfeather flies in for 3 and Haddy summons a morph, passing back the turn. West casts wave of indifference on the three blockers and then sends in his team ending the game.

Haddy starts proceedings in the deciding game with a Crypt Sliver and once again West plays out a turn two Taunting Elf. Haddy cycles out a Gempalm Polluter and sends his Sliver into the red zone again, summoning a Symbiotic Elf before passing the turn. West plays out a Goblin Clearcutter but it fails to scare Haddy as he sends in his Crypt Sliver on a suicide mission, making it through the defense. He plays out a Noxious Ghoul and the reason for the attack becomes clear as West loses his elf and Haddy loses his sliver.

Clearcutter knocks out a forest and West rewards its hard lumberjacking by casting a Mythic Proportions on it. Haddy slams his Ghoul and Elf into the Red Zone Cycling a Krosan Tusker, gaining a mountain and summoning a morph. The 11/11 monster comes crashing into the red zone and Haddy lets it smash him in the face, dropping him to 9 life compared to West’s 12. West then plays out an Invoker and passes back the turn. Haddy flips over Skirk Marauder taking out the Flamewave Invoker and he is now faced with a problem of what to do about the Mythic Clearcutter. The Skirk and the Ghoul come crashing in to the red zone dealing 5 damage, and Haddy plays out a Wretched Anurid. The Clearcutter goes into the red zone and is double blocked by the Anurid and the Symbiotic elf, with West assigning 3 damage to the elf, 3 to the Anurid and 5 to Haddys nugget. West plays out a morph and passes the turn back across. Haddy thinks for a long time and finally decides that he has no chance of dealing with the monster.