The Pro Tour loves a Cinderella story, and here in Amsterdam one such story is tentatively brewing in the form of one Ludvig Londos. The Swedish player is a second year philosophy student from the south of the very nation that hosted Grand Prix–Gothenburg just one weekend prior to the Pro Tour. So what makes his story so special? Start with how he qualified for the event here in the Netherlands: at 3 a.m. before the tournament was to start at a Last Chance Qualifier. I sat down with Ludvig to discuss his story after Round 10 on Saturday.

So how did Ludvig qualify at the LCQ just hours before the actual Pro Tour began? "I decided to play Sovereigns because I wanted a deck that could be the most unfair, and the Sovereigns deck .... If you get the turn three or turn four Sovereigns it's pretty much the most unfair thing you can do in Standard. So I was just riding on the Sovereigns. I was basically playing a combo deck." 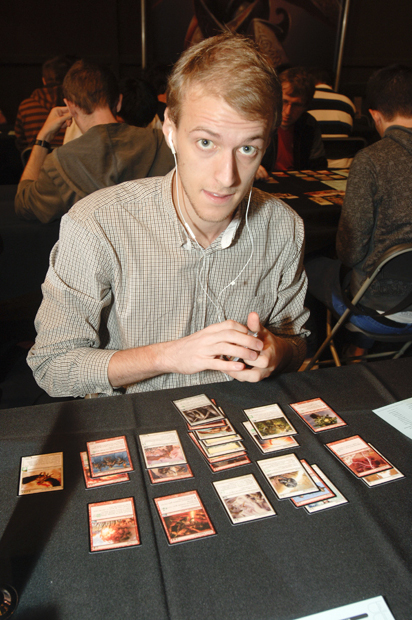 Sovereigns of Lost Alara and the Mythic deck are certainly a force to be reckoned with (though you don't slog through an entire Last Chance Qualifier on luck alone), but why travel to a Pro Tour you're not even qualified for in the first place?

"I have six friends that were qualified. One of them was leaving from the south [of Sweden], so I thought I'd be his travel partner so he wouldn't travel alone. And take my chances!" How much of a chance did that mean? What was Ludvig's background in tournament Magic to begin with?

"I've been playing six or seven years," he explained. "The first Pro Tour I played in was San Juan. I have so many PTQ Top 8s, but I've never won one. I qualified for San Juan through Grand Prix–Brussels where I Top 8ed. I think I have 16 or 17 PTQ Top 8s. I've been trying to qualify for four years. This year it kind of rolled together with the GP and after San Juan I started to play more and more."

Despite living in geographically remote Sweden, Londos is one of very few players on the Pro Tour who doesn't utilize Magic Online extensively for testing purposes. But it's difficult to get good at the game in a vacuum, and Ludvig gave heavy credit to playing extensively at his local store, Spel, which means "game" in Swedish. "This fall I'm going to start playing Magic Online," he explained, aware it was unusual for a player playing at the professional level to find success without spending some time online.

Of course, the Pro Tour isn't just playing but seeing the world, interacting with like-minded players, and experiencing something truly unique. What were Ludvig's favorite parts of being at the Pro Tour, besides competing? "The venue is pretty cool," he answered, before adding, about being in the Netherlands: "just being in Amsterdam is pretty cool. When we're walking around through all the bridges, that's really nice."

Of course, playing is a pretty fun part of the Pro Tour too. "I've been playing pretty good. I think that once you start winning, sometimes you just keep on winning and the cards just come your way. But I've been playing real good also, I think." Ludvig said, offering up his thoughts on just how his tournament had been going so successfully after he had qualified for the second day of competition at the top tables, drafting at pod 1 on both Friday and Saturday.

Chatting after he had just lost to Brian Kibler, I asked the Swede if playing against some of the Pro Tour's biggest names was intimidating. "They're still humans. It's real cool to play against a guy that you know about from the internet and Good Games Live. People are really nice, so they deserve to be good and play good," he answered.

I did have to ask, what was the deal with the hat? "I have to say, I'm forced to wear the hat. The Swedes have this thing where the player doing the best from Sweden has to wear the fish hat. I hope I won't lose it. Then again. . . it's pretty awful." And how did Ludvig hope to do by the end of the weekend? "I'm not thinking about that. I'm just playing one game at a time." 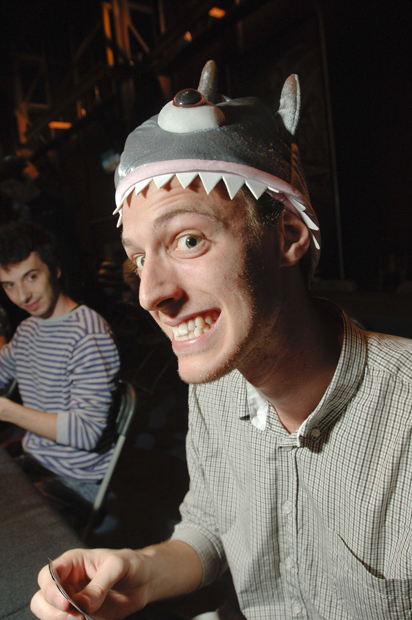 Londos always seems to be smiling, even when he's being eaten by a shark.