We were asked a very good question on CoveritLive that we felt needed some addressing.

From Ian - @Nate: Could you inquire whether or not the players felt more inclined to play a 'safe' deck in Modern?

When you know your opponents well and you know what they want to play, and your Modern deck choice determines a good portion of your success for the weekend, the safe choice ends up being the correct one.

After talking to all of the players about this issue, none of them really seemed to consider their choice for the tournament particularly risky, nor were they looking to take a risk on Modern deck choice, which is completely understandable. After all, half of the tournament's Swiss rounds are Modern, and they'll be playing Modern in the Top 4, so being risky generally isn't worth as much as just making the correct decision. They did lend some insight into how they chose their relatively 'safe' decks, though. Here are a couple of examples.

Martin Juza, who prepared for this tournament with Shuhei Nakamura and Yuuya Watanabe, said that their decision to play Jund was influenced by their knowledge of the other players in the field.

"We know everyone who is going to be at this tournament, and we know what they like to play. From that, we could more or less put everyone on a range of decks. With that range in mind, we were able to get a pretty good understanding of the metagame. Since we figured that most of the field would be playing creature-based decks, we felt fairly confident in Jund. For example, the mono-white deck with life gain that is big on Magic Online right now absolutely crushes us, but we knew that no one here was going to be playing it. Looking at what everyone is playing, I think we're pretty good. About the only deck we have to watch out for is the White-Blue deck Finkel and Kibler are playing. But we do have Liliana..."

Juza and the Japanese used their knowledge of the players in the field in one way, and Tzu-Ching Kuo used it in another way, in one of the more insightful responses I got to this question. Expecting everyone in the field to be playing decks that relied heavily on using their superior skill to make the best of every decision, as you do when there are sixteen of the best players in the game under one roof, Kuo decided that the more important skill wasn't the plays made in each game. It was the ones made before the game. 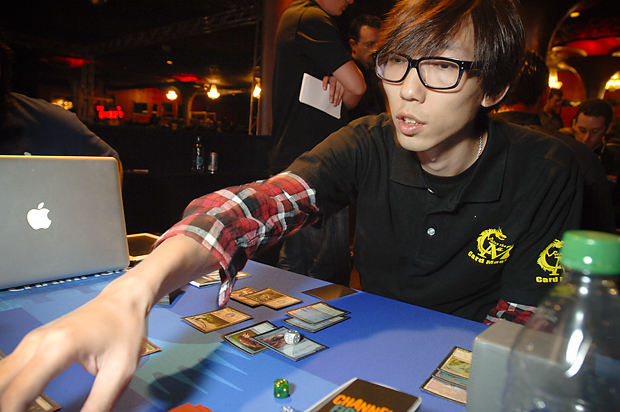 "Everyone in this tournament is very skilled, and they are likely to be playing difficult decks. Since everyone is so good, playing a deck that allows you to outplay your opponent (like Delver of Secrets, as one example) is less important. Since you aren't trying to rely on outplaying your opponent, you need to out-plan them. Skill doesn't matter, the ability to metagame does. I took the deck that I felt was the best deck in the metagame and played it. After looking at the other decks in the field, I feel very good about my choice."

So in short, I suppose the answer to the question at hand would be yes, the players all seem to have opted for the 'safe' deck. No one bought tickets to ride the variance train. And in a format that is as important to a tournament that matters as much as this one, the 'safe' play seems to be the right one.